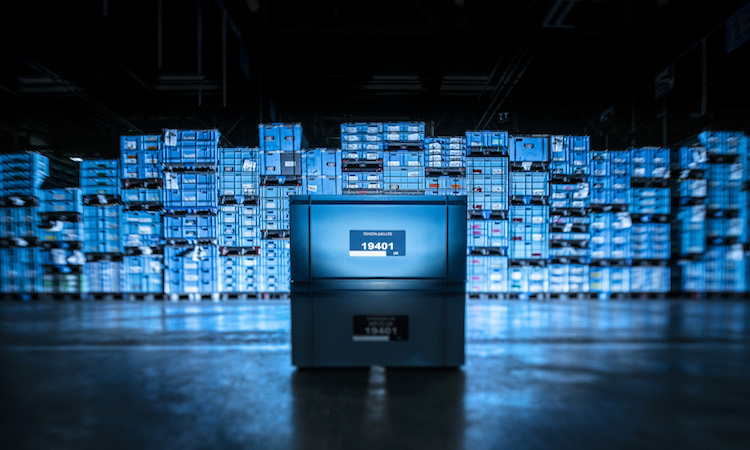 It’s just a box – a simple plastic box, nothing special. But when there are over 740,000 boxes in circulation throughout Toyota’s TMUK manufacturing operations, identifying any given one becomes vitally important because temporarily misplacing a single box of parts could result in production grinding to a halt.

As a result, all the blue boxes at Burnaston, and Deeside are owned by TMUK. No boxes are shared with any other part of Toyota’s operation.

Every component used to construct a Toyota has a unique reference number so that, no matter where in the world, each production process uses the correct part, every time. At Burnaston, the logistics department receives thousands of parts every day from other Toyota facilities and external suppliers – as many as 37,500 items packed in crates, boxes and pallets during every shift. From the tiniest bolt to large items such as complete powertrains, all the parts required for production pass through the logistics department

Each delivery has to be processed and checked to ensure that the correct parts have been received, and that the plastic parts boxes are accurately identified. From there, the boxes are loaded onto tow motors which transport them to the exact location where that part is stored, ready for immediate dispatch to the production line when the ‘Kanban’ order arrives.

Using plastic parts boxes is one of the methods by which Toyota plants, including Burnaston, have been able to achieve their ‘zero waste to landfill’ targets. Up until the early 2000s, many parts were shipped in cardboard packaging, which was often discarded once it had been used. To avoid this waste packaging, Toyota’s Logistics Group designed a collapsible plastic container that could be returned to its source to be reused. Strong enough to be used time and again and light enough not to compromise transport and handling requirements, its introduction brought about a dramatic reduction in the amount of cardboard being disposed of.

So yes, it is just a box, a simple plastic box but, combined with all the other boxes moving around Toyota’s global logistics system, it has made an important contribution towards TMUK’s environmental targets.