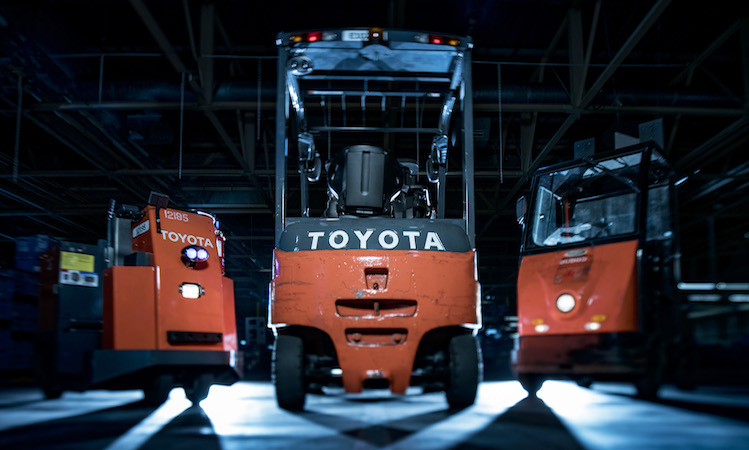 How do you ensure that the machinery you use to build a car never lets you down? Simple – you build it yourself! At Burnaston and Deeside, forklifts are essential for the safe unloading and delivery of parts around the factories. These are supplied by Toyota Material Handling Europe (TMHUK), producers of forklift and tow trucks.

TMHUK’s trucks are built in factories in Sweden, Italy and France using the same lean manufacturing process that is used to produce Auris and Avensis. There is a core range of seven different forklifts, powered by electricity or diesel. And true to Toyota’s technical reputation, there are even hybrid versions.

Burnaston regularly updates its fleet as new models become available. In total, there are 91 forklifts and 95 tow trucks working in logistics at Burnaston. The forklifts deal with up to 90 heavy goods vehicles every day, taking just 15 minutes on average to unload each truck, or re-pack it with empty crates.

The tow trucks take parts straight to the production lines, or to a stocking area where parts are organised into the right sequence before being delivered. Toyota’s forklifts and tow trucks are vital tools in the smooth running of the ‘Just-in-Time’ manufacturing that’s central to the Toyota Production System. By delivering the right number of components to the assembly line, just when they are needed, wasteful over-production can be avoided and expensive inventory can be kept to an efficient minimum.

Toyota’s first counterbalanced forklift went on sale in Japan in 1956. The first model to be created in-house, in 1970, was designed by Masao Fujita, who just two years later went on to pen the original Toyota Celica sports car.

Toyota has since become the world’s largest supplier of forklift trucks, growing through mergers with fellow manufacturers BT Industries, Raymond and CESAB. These four brands, united in Toyota Motor Corporation’s ‘Industries Group’ division, accounted for more than a fifth of all new forklifts sold around the world in 2016. In the same year, Toyota launched its first hydrogen fuel-cell forklift in Japan.