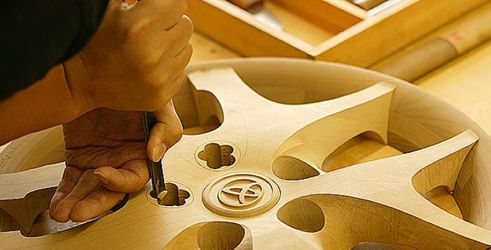 Good design is more than just the realisation of a solitary idea; it is a process that might begin with one nugget of inspiration. But in order for it to expand into something tangible, Toyota puts each vehicle proposal through a series of five important and very deliberate processes designed to transform it into a complete, yet still original-looking, product.

The car design process begins by collecting thoughts and ideas based around the development goal and target customer profile. To put this together, the designers research the market and explore what themes might meet customer needs while keeping a close eye on emerging trends. Exhaustive discussions follow until the designers are satisfied that they have settled upon an overall concept.

The first expressions of this concept are seen in the freehand sketches of the designer. At this stage the sketches are intended to deliver a broad visual sense of the design goal and the potential for its future development.

While traditional pencils, pastels and markers frequently play a role in the early stages of the design process, computers soon take over as the most practical drawing tools. They allow the designers to examine design ideas and more sophisticated expressions in a much shorter space of time.

Digital modellers are then tasked with turning these two-dimensional sketches into three-dimensional shapes in virtual space. To transform a designer’s vivid imagination into something approaching buildable reality is an incredibly difficult creative process, especially when the visual appeal and distinctive features of the original idea have to be respected.

The assigning of colour gives individuality and does much to visually influence the perceived character of a vehicle. Colour coordination is a critical element in the design process, so Toyota goes to great lengths to research fashion and interior design trends to decide on the best colour palette for its new vehicles.

This effort extends to the interior, which has to coordinate the wide range of colours and materials used in the instrument panel and steering wheel, seat fabric, headlining, carpet and other fittings. Interior colours are studied closely from a variety of perspectives in order to create an impression that pleases all five senses.

The creation of a three-dimensional clay model requires extensive input from the designer in order to fully understand the shapes and proportions of the digital rendering into a physical mass. In that respect, the clay modeller’s putting of ‘flesh’ onto what had until this point been a virtual vehicle is a painstaking process of moulding and carving. it is only the frequent repetition of this procedure that slowly refines the final external form.

Exploration of the design of other aspects is carried out through mock-ups that are as close as possible to the real object. With regards to the interior, highly skilled craftsmen use wood, plastics, metal, fabrics and a wide range of other materials to create a full-size model of the designer’s concept. The designer is then able to ascertain the spaciousness, feel and accessibility of the cabin, plus the visual ‘friendliness’ of the meters and operation of the controls.

Up until this point, the new vehicle has only really been seen in artificial environments by its designers and modellers; now a more natural, customer angle is needed. This is supplied within the decision hall, a large penthouse room with a turntable and roof that opens and closes to allow natural light to flood in and the vehicle to be viewed from any direction.

The facility has special lighting that allows each model to be examined in conditions close to natural light on rainy days or at night, while large display screens can also be used to study the designs of a number of vehicles at the same time.