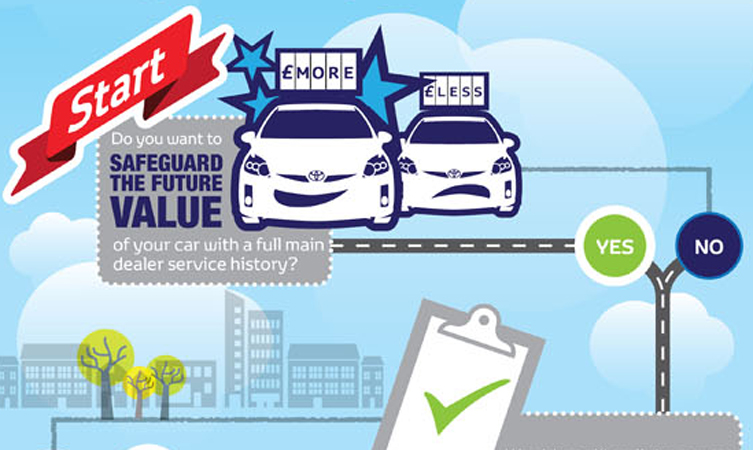 Struggling to decide whether to have your car serviced at a Toyota dealer or an independent garage? Let us help you decide with this handy flowchart.

If you’re still in two minds about where to have your car serviced, ask yourself a few questions.

Do you want to preserve the future value of your Toyota? Of course you do. According to one 2014 survey which quizzed 2000 people about buying a used car, only 37% felt that an independent dealer service history was as valuable as a main dealer service history. So, if you want to get the best possible price when you sell your car on in a few years it makes sense to have it serviced at a Toyota dealer.

It goes without saying that you want your car to be worked on by an expert. Every technician who works on your car at a main Toyota dealer is a graduate of the Toyota Academy. They know Toyota cars inside out and back to front. All Toyota technicians regularly attend further training to make sure they stay up to date with the latest models and developments.

Now, the mechanics at your local garage are very probably skilled professionals and will do a decent job. But they’re generalists rather than specialists, and will work on many different makes rather than concentrating on Toyota. They just won’t know the cars and how to best care for them as well as a Toyota expert.

That goes double if you own a Toyota hybrid. These are high-tech machines and a general mechanic could be unfamiliar with them, while a Toyota technician will work on hybrid cars all the time.

In your local Toyota dealership, our technicians have access to the latest diagnostic kit. They’ll get to the bottom of any problem quickly and efficiently. Will an independent garage be able to identify the cause of any problem so quickly?

Then there are the parts used in any servicing and repair work. Toyota dealers use official parts and nothing else, while independent garages may use pattern parts. Toyota parts are the real thing, designed to fit your Toyota perfectly and function just as well as the parts fitted to your car when it rolled down the production line. They come with a warranty lasting at least 12 months, too.

Now, the parts an independent garage uses may look much the same, but are they made to Toyota standards? Will they last as well as the genuine article? Why take the risk?

If expertise, quality, reliability and the future resale value of your car matter to you, then it makes sense to have your Toyota serviced at a Toyota dealer.

See also:
Why service your car at a Toyota dealership?
Genuine parts: Toyota through and through
Book a service online