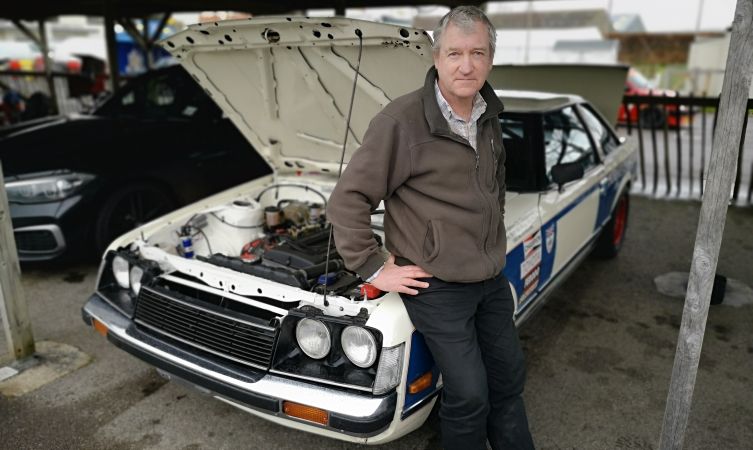 Having spent more than 15 years working for a corporate hospitality service at Goodwood, Mark Bevington had developed a fondness for the Sussex estate. But it wasn’t just the fresh air and countryside he enjoyed. Lord March’s passion for historic motorsport had also cultivated within Mark a determination to participate in the Goodwood Revival festival. 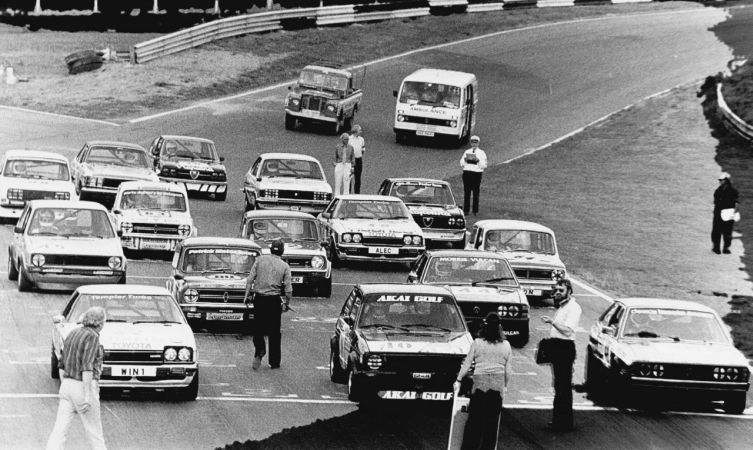 Mallory Park in 1979: Win Percy’s Celica on the front row, with this identical TA40 in the fourth row with Alec Poole behind the wheel

Aided by incorrigible friends, Mark eventually scratched that itch by tracking down and race-preparing a rare Isuzu Bellett. This small, Sixties saloon subsequently ran at three Revival events and had the honour of being the first Japanese car to ever race at the festival. Feeling well-rewarded for his efforts so far, Mark expressed the desire to maintain that momentum by taking on a new challenge – one that he hoped could grant him entry into the exclusive Goodwood Members’ Meeting. 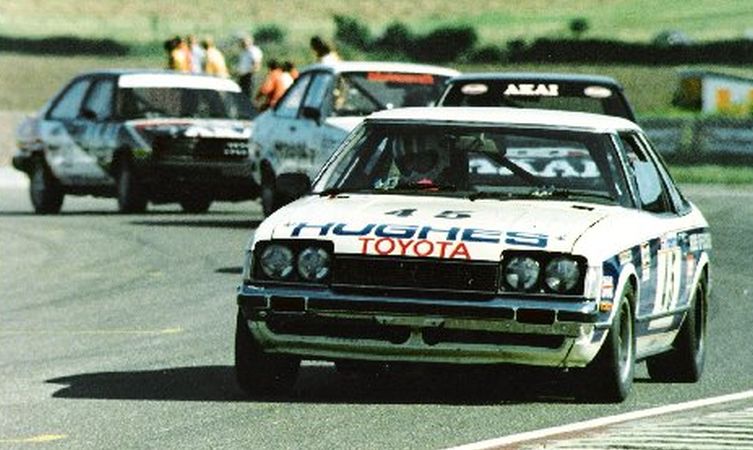 Future F1 star Martin Brundle took the wheel of the Celica two times during the 1980 BSCC, including this round at Thruxton 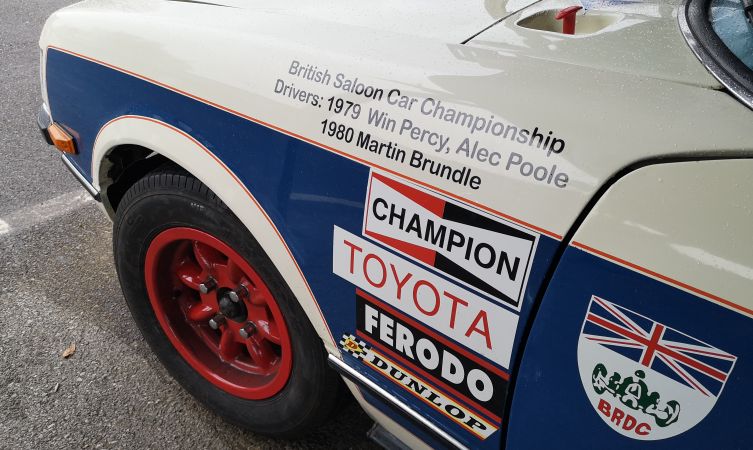 The specific vehicle required to achieve that goal remained undetermined, until Mark’s chief car hunter reported that he had found a classic British Saloon Car Championship (BSCC) Toyota Celica for sale in Belfast. And incredibly, despite being more than four decades old, this second-generation 1978 model was still wearing some of the original, hand-painted Hughes of Beaconsfield sponsorship livery that it ran in the 1979 and 1980 seasons. 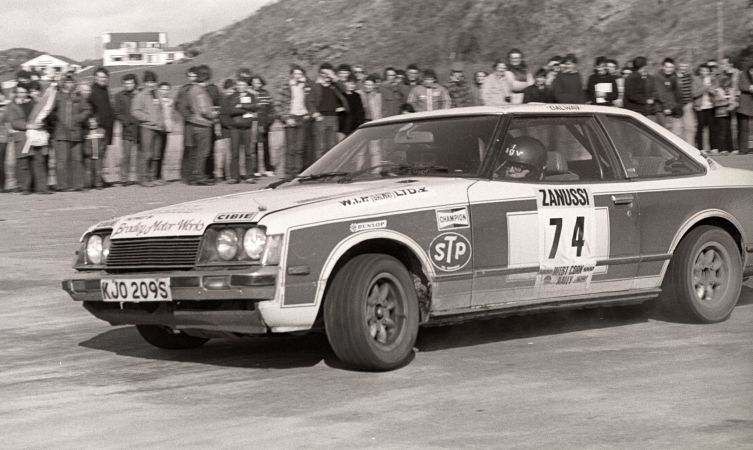 From the smooth to the rough: rally driver Sandy Lawson campaigned the Celica in Ireland during the Eighties. She is pictured here in the West Cork Rally in 1981 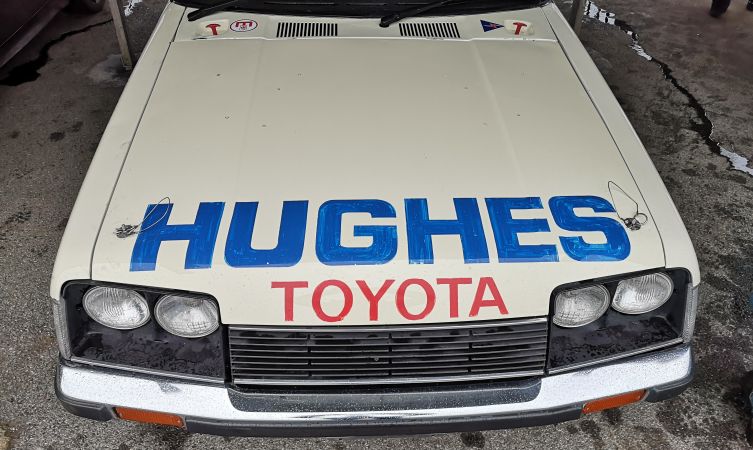 The seller was Denis Bell, a well-known stalwart of the Toyota scene in Northern Ireland. Denis purchased the Celica in 1988 and over the years had compiled a dossier that detailed the car’s history. Indeed, for reasons that would become clear later, this paperwork was of vital importance in proving the Celica’s provenance and distinction as a race car of historical significance. 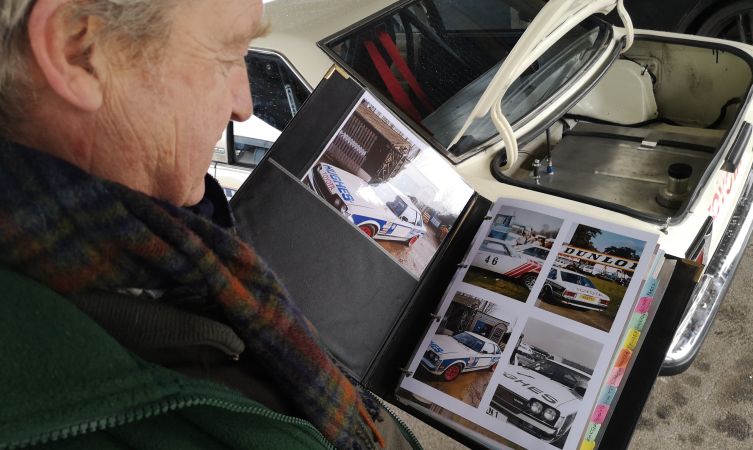 Apparently, the Toyota was one of two TA40 Celica XT models that had been converted to what was colloquially known as ‘Group 1.5’ specification in order to compete in the BSCC, predecessor of today’s British Touring Car Championship. The conversion to a high-performance 2T-G twin cam engine (the original was a single cam 2T-B) and race conformity modifications were carried out by the joint efforts of Toyota dealer Hughes of Beaconsfield and BSCC specialist Arden Engineering on behalf of Toyota (GB) Ltd. 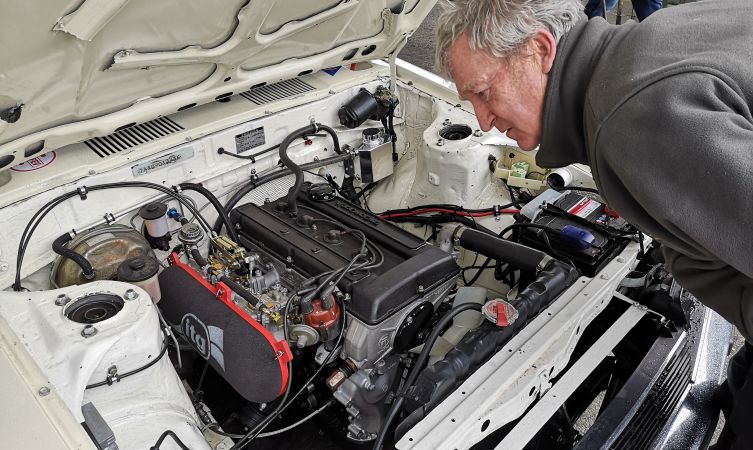 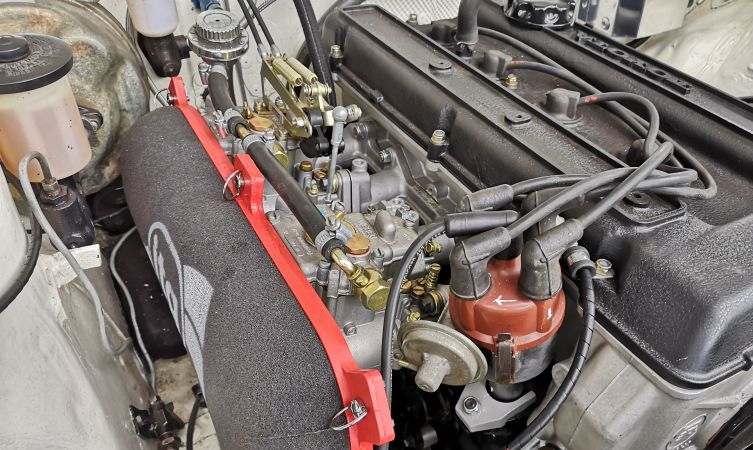 The Celica started its racing career as understudy to the identical TA40 that Win Percy campaigned in 1979 and that Chris Hodgetts ran in 1980. Nevertheless, it still experienced frontline activity in both seasons. During the 1979 BSCC, it raced five times: twice in the hands of Irish racer Alec Poole, once by team manager Gordon Meyer, and a further two times by a young Martin Brundle. Indeed, the future F1 driver was drafted in to drive this Celica a further two times during the 1980 BSCC. 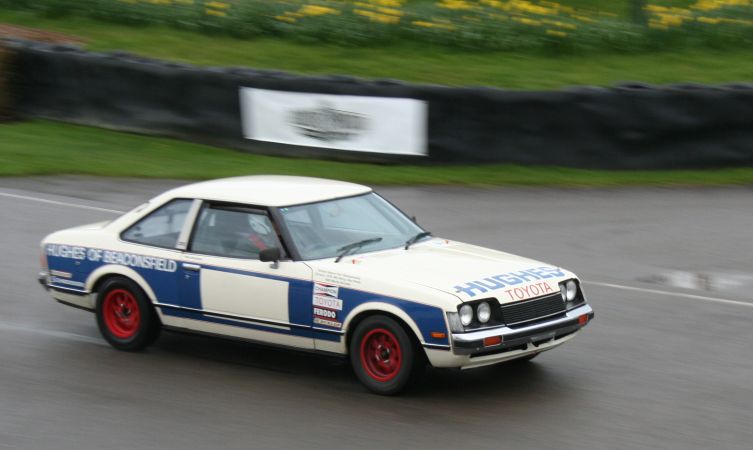 That turned out to be the Celica’s last experience of UK circuit racing, because for the 1981 season the Hughes BSCC team transferred its attention to the newer, fourth-generation Corolla. So the team parted company with the Celica, selling it to female rally driver Sandy Lawson, who tweaked the specification for a new, much more demanding life rallying through Ireland. 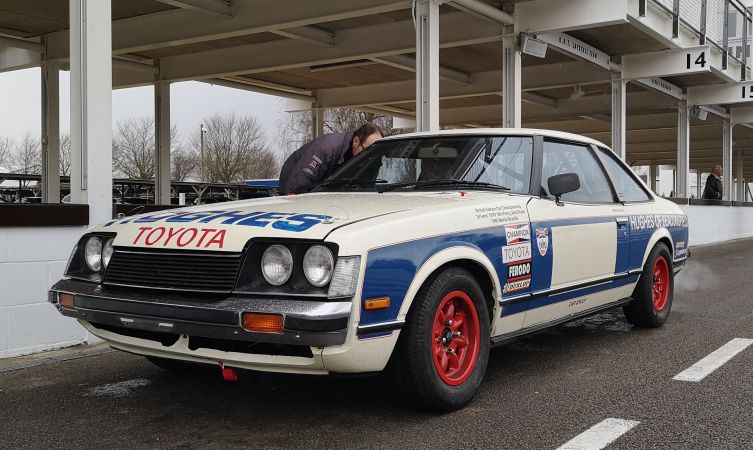 Fast-forwarding to its most recent change of ownership, Mark recognised that following years of rallying the Celica would not be immediately ready to hit the track. However, the car still retained much of its originality: even the ultra-light magnesium alloy wheels were still on the car and still perfectly true. Work therefore began in earnest to recommission the Celica with a rebuild of the 2T-G engine – a job entrusted to Dave Wild of DTW Engines – and a complete re-think of the suspension and final drive ratio. But of most immediate concern to Mark was how he could secure the Historic Technical Passport (HTP) needed for the car to take part in a Goodwood Members’ Meeting. 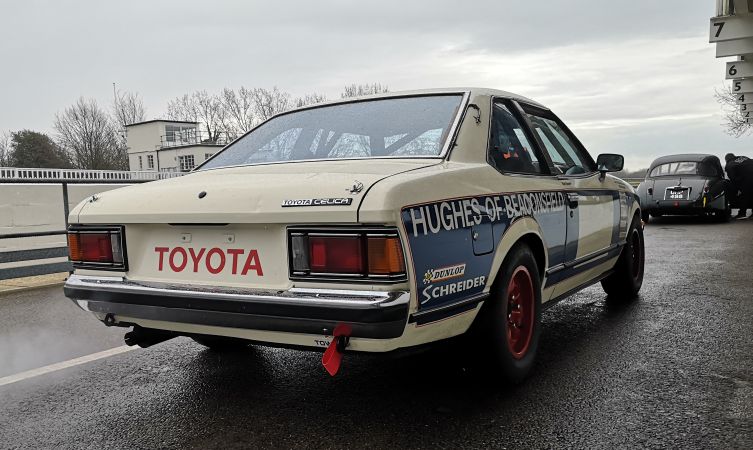 The FIA requires that race cars of historic significance possess an HTP to be eligible for historic events, and this cannot be issued unless the vehicle’s owner can prove the car is precisely what it purports to be. The difficulty in the case of the Celica was that it had been modified to a specification allowed by the organisers of the BSCC and the Motors Sports Association, but this was in excess of the Group 1 homologation directed by the FIA. These unsanctioned extras included being allowed to install a free-flowing tubular exhaust manifold, adjustable spring platforms, and the freedom to select your preferred carburettor brand, as long as it remained to OE specifications. 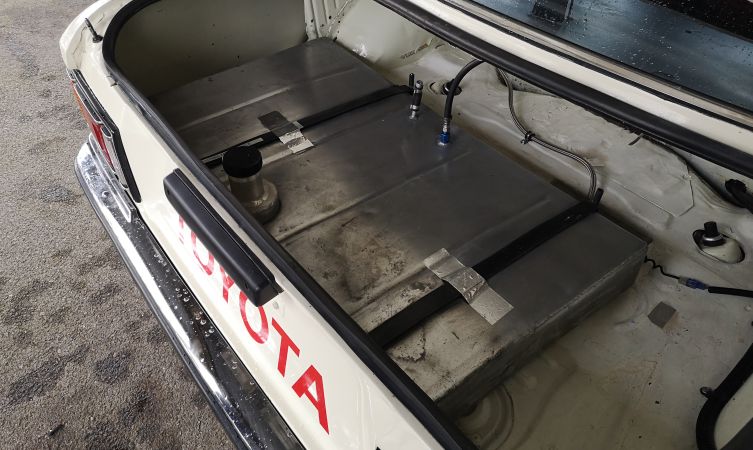 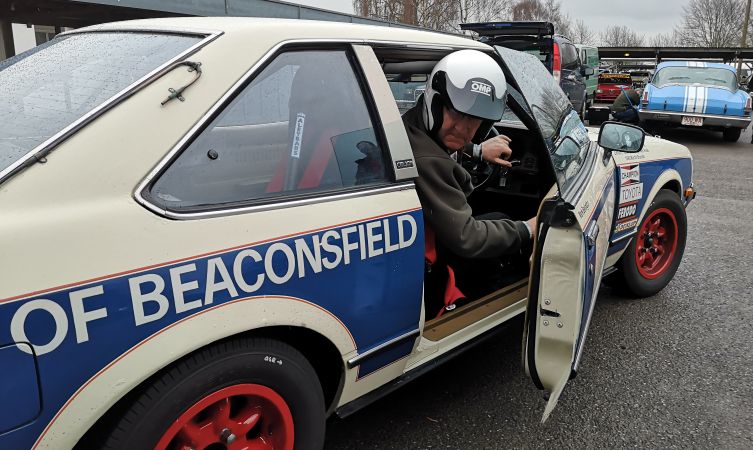 So in order to qualify for an HTP, Mark had to either downgrade the Celica to FIA specification or provide written proof that the car had passed scrutineering and was allowed to compete in the so-called ‘Group 1.5’ specification. This is where the dossier of paperwork became invaluable, because buried deep within what could be seen as undecipherable notes was the discovery of the original test and race data sheets. When these were combined with the 40-year-old sales invoice from Hughes to Sandy Lawson, which included the Celica’s unique Vehicle Identification Number, the FIA had the proof it needed to grant Mark and his TA40 Celica its all-important HTP. 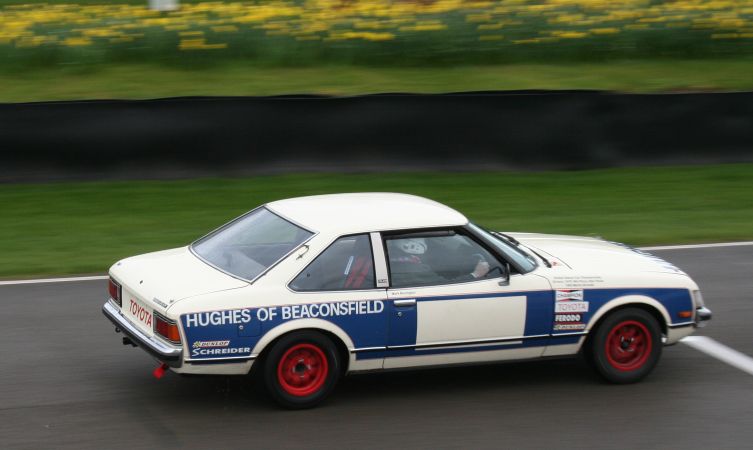 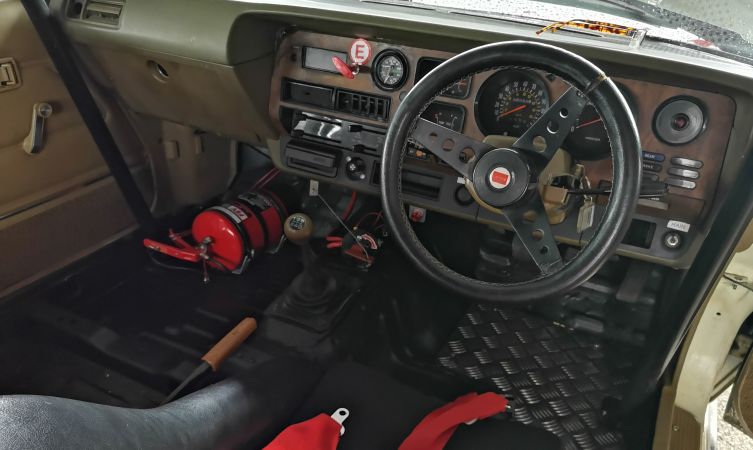 Everything was now in place for Mark to take part in the 78th Goodwood Members’ Meeting at the end of March. The majority of photos accompanying this feature were taken on a general test session at Goodwood circuit earlier this month, where the Celica was put through its second of three post-recomissioning shakedowns. Circumstances, of course, have since forced Goodwood to postpone the Members’ Meeting. However, the silver lining to this cloud is that Mark has now been given the gift of extra time to develop the Celica in preparation for its eventual rescheduling.

Having waited patiently for 40 years to get back on track, we’re sure this classic TA40 Celica can hold on for a few more months before strutting its stuff with its contemporaries once more.