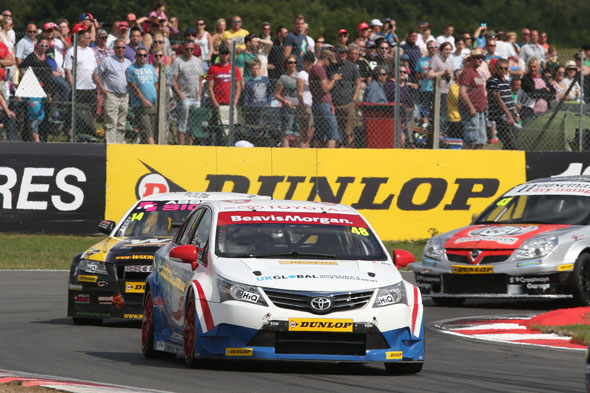 Toyota’s four BTCC independents were all strong points-scorers at Snetterton this afternoon as the Dunlop MSA British Touring Car Championship resumed after its summer break. Ciceley Racing’s Adam Morgan continued his season-long run of form to collect a hat-trick of top-seven finishes in his Avensis, and there were points finishes also for Speedworks duo Dave Newsham and Ollie Jackson, and for Dynojet Racing’s Frank Wrathall.

Morgan set the pace among the Toyota men in qualifying for the first time this season, netting seventh on the grid. The Lancashire 25-year-old successfully converted that to seventh place in race one, fifth in race two and fourth in race three. He’s now finished in the top 10 on 15 occasions this season and maintains seventh overall in the drivers championship.

“It’s turned out to be a mega weekend and if you’d offered me a seventh, a fifth and a fourth at the start of the week, I’d definitely have taken it. To be honest, I had a poor start in each of the three races and lost out, but I battled back and the car was strong all day.
“After the disappointing way that the first half of the season came to an end with the accident at Croft, it was nice to come here and run strongly at the front again as we did earlier in the year. The team has done a great job and we’ve been able to strengthen our position in the championship, which is a good boost going into the next round.”

Frank Wrathall turned his weekend around in dramatic style after a disappointing qualifying and first-race retirement brought about by an electrical failure in his Toyota’s throttle system. The Dynojet driver started race two from 27th on the grid and sped to a remarkable 10th at the chequered flag. Wrathall was lucky to make the race at all: the fault which sidelined him from race one was traced with minutes to spare. “I wasn’t sure we’d be going out, but the guys did a brilliant job to fix it,” said Frank, who after a stirling drive through the field to 11th was promoted to 10th on the last lap when Tom Onslow-Cole and Rob Austin collided ahead of him and Austin spun from the fray. Wrathall went on to collect 11th place in the finale to secure his largest points haul of the season since the opening races at Brands Hatch.

Newsham’s Snetterton highlight was an eighth-place finish in race two, from 18th on the grid, achieved despite steering damage after he was caught in the middle of another driver’s accident. The reverse-grid draw handed the Toyota driver pole position for race three, but his race ended in enforced retirement.

“It’s been a frustrating weekend because we knew we had a quick car, but things have conspired against us,” said Dave. “We had a clutch issue with both cars at the start of race one which then affected us throughout race day and it put us on the back foot. On the way to the grid for race three, the brake I use to control the car at the start got locked on, which meant I couldn’t then use it at the start and got bogged down. I was then hit a number of times and my race ended in an incident with Matt Neal: I put my car up the inside and he came across. When we touched and I went on to the grass, I wasn’t going to save it.”

Jackson scored points in two of the three races for the first time this season, placing 11th and 13th respectively in races two and three. “In terms of the performance it’s been an improvement but it was difficult on race day because we had a tough qualifying session that put us on the back foot,” said Ollie. “It was very rough and ready on track – I think I must have passed about 20 people but only made up five places in the three races. In the final race, the car just wanted to swap ends at turn one and I couldn’t save it, but luckily everyone managed to avoid me.”
In three weeks the championship heads north of the border to the Knockhill circuit in Fife, venue for rounds 19, 20 and 21.