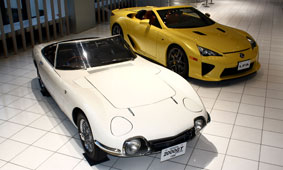 Quick! Grab a flight to Japan. If you head down to the Toyota Kaikan Museum in Toyota City you will be able to see an open-top Toyota 2000GT and the Lexus LFA Spyder side by side.

These two incredibly rare and iconic sports cars are rubbing shoulders in the museum’s showroom.

Toyota 2000GT: background
After the second Japanese Grand Prix of 1964, Toyota began to develop a Gran Turismo model with cooperation of Yamaha Motor Co., Ltd. A prototype was unveiled at the 1965 Tokyo Motor Show, and the production model was placed on the market in May 1967.

Two of its prototypes were converted into open-tops and appeared in a James Bond film You Only Live Twice.

You can read more about the LFA at the Official Lexus UK Blog.