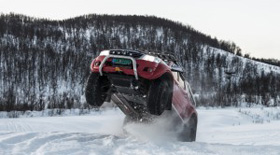 My recent trip with Toyota to Tromsø, Norway was a veritable feast when it came to driving a selection of models from the range, writes Martyn Collins. On top of the Auris Hybrid, I was lucky enough to experience snow driving in a Hilux Arctic Trucks, as well as possibly the most exciting handling Toyota, the GT86. So, how do they fare in these Arctic conditions?

As the name would suggest, the Hilux does pretty well. Remember the legendary Top Gear Polar Special episode, where Jeremy Clarkson and James May race against Richard Hammond and dog sled in an Arctic Trucks-converted Hilux to the Magnetic North Pole? Well Tromsø local, Kjetil Hansen, runs an off-road adventure company and has a matching AT38, right down to the red paint job and offers to let me have a go!

A snow-covered gravel pit is our North Pole for the morning and seems a good place to test the off-road ability of this comically tyred Toyota. I engage the diff-locks, slide the autobox into low-range, mash the throttle and it takes off on the deeply rutted surface.

Big tyres or no big tyres, snow driving in this Hilux is as easy. Kjetil may have let some air out of the unique 38-inch tyres to increase their surface area on the frozen surface, but the ride is a pleasant surprise, remaining composed and refined.

I’m soon marvelling at the power and torque of the 3.0-litre D-4D diesel engine, as what look like impossible peaks are dispatched without breaking a sweat.

After an hour of attempting to get the Hilux stuck, I admit defeat – it seems like nothing will stop this Arctic Truck! Kjetil takes over and shows me just how tough this Toyota is, simply by accelerating as fast as he can up a hill and we achieve big air – it’s a great way to spend the morning!

So after snow driving in a Toyota Hilux Arctic Trucks, to the other extreme: the Toyota GT86. In the short time it has been on sale in the UK, it has earned a reputation for its keen handling. So, what’s it like on winter rubber, compulsory in Norway at this time of year?

Good news is that a GT86 on winter studs is no less exciting, as 123 sold since its 2012 launch in, will testify.  The steering remains precise, the ride sportily firm – overall no worse than standard.I’m grateful for the steering, as previous drivers of our well-used dealer demonstrator appear to have enjoyed its peachy rear-wheel drive chassis too much; the almost stud-less tyres tell their own story.

Empty car parks and quiet country roads are soon turned into makeshift drift tracks and although tail-out antics are easily achieved and are very controllable, concentration is still needed on the slippery surfaces.

Careful use of the steering, handbrake, plus the throttle and the GT86 almost dances across the icy surface like an Olympic Skater.

Two very different Toyotas but both great to drive and holding their own in this white wilderness of Norway.

For more information of the Toyota Hilux and GT86 visit the Toyota website.