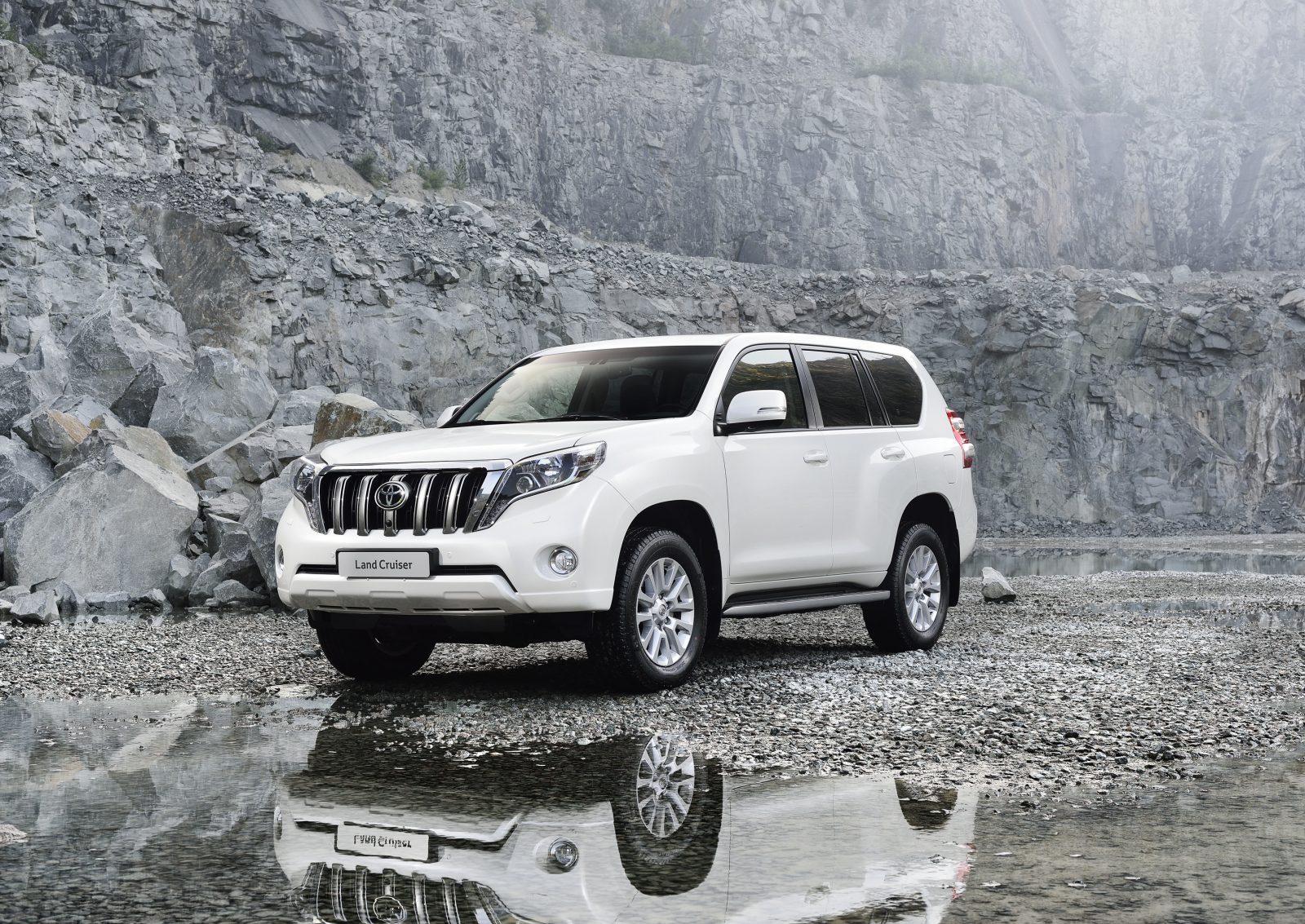 The 2014 Toyota Land Cruiser is set to arrive in the UK early next year – here are the first images and details of the new 4×4.

Land Cruiser enjoys a global reputation as an ultimate go-anywhere vehicle, a status built on its formidable performance in the world’s toughest environments over more than 60 years.

The 2014 model will benefit from a series of improvements that give Land Cruiser new styling, an improved interior and revised handling. The reworked design preserves the model’s distinctive identity, while the interior changes raise quality, convenience and ease of use. Detailed adjustments to the suspensions systems – both the standard set-up and the Kinetic Dynamic Suspension System (KDSS) featured on higher grade models – deliver even better stability and ride comfort.

The 2014 Land Cruiser will be introduced in the UK early next year; full details and specifications of the model range will be announced nearer the on-sale date.

The new front-end treatment is the stand-out feature of the 2014 Land Cruiser’s refreshed design. Most noticeable is the more prominent grille, an evolution of the traditional arrangement of five parallel vertical bars. According to model grade, the bars have a metallic or silver finish.

The new headlamp clusters and daytime running lights now form a single unit with the grille and the entire structure is set higher, making it less vulnerable to damage when driving off-road. The lamp units incorporate the high and low beam lights, turn indicators and DRLs; halogen or LED headlights and DRLs will be offered, according to grade. In a neat touch, the units feature discreet Land Cruiser branding and a contrasting black and powder-coated aluminium internal finish.

The over-size bumper has a stepped design that further protects the headlights above. In spite of adding 20mm to the front overhang, its sharply cut-away bottom edge means there is no change to the vehicle’s turning circle (5.2m for the three-door, 5.8m for the five-door) or its approach angle when driving off-road. The wheelbase and rear overhang are unchanged, with overall vehicle lengths increased to 4,335mm (three-door) and 4,780mm (five-door).

At the rear the lamp clusters have been redesigned with clear lens blocks and red accents and the licence plate surround has been made more prominent. New 17 and 18-inch wheel designs have been introduced and the range of exterior colours will include a number of new mica finishes.

The new 2014 Land Cruiser’s cabin gains new trims and detailing that raise the overall tactile and perceived quality. The dashboard has been redesigned with a focus on making the vehicle’s drive systems easier to access and monitor.

The centre console gains a new switch panel that brings together the controls for the on and off-road driving technologies. These include a new selector dial for the five-mode Multi-Terrain Select and five-step Crawl Control, flanked by switches for the all-wheel drive and Adaptive Variable Suspension.

Making the systems easier to use doesn’t end there: the new 2014 Land Cruiser also gains a 4.2-inch TFT colour screen, set between the main meters in the driver’s instrument binnacle. The choice of function has been extended to include an angle gauge, traction control operation on each wheel and the status of the differential locks. The driver can select the screen functions using a control on the steering wheel, with additional new options including tyre pressure warning, headlamp levelling, traction control “off” confirmation and Blind Spot Monitor alerts.

The Optitron speedometer and tachometer have a new look, with thinner needles and blue illumination, and centre console has a new brushed metal finish for the upper audio control panel, above the central seven-inch colour display. Piano black and wood grain finishes have been introduced around the dashboard, door panels, centre console, steering wheel and gear lever, and an aluminium detail has been added to the meter rings, air conditioning dials, air vent surrounds, audio panel and steering wheel.

In the five-door Land Cruiser, access to the third row seats has made been made easier by increasing the folding angle of the second row seats from 33.8 to 46 degrees. Seat upholstery has also been upgraded with double stitching for cloth and contrast colour stitching for leather.

How safe is the 2014 Toyota Land Cruiser?

The comprehensive safety provisions on Land Cruiser will be extended with the availability of Toyota’s Blind Spot Monitor and Rear Cross Traffic Alert systems.

The Rear Cross Traffic Alert uses the same radar as the Blind Spot Monitor to alert the driver to any vehicles approaching from either side that may not be visible through the rear screen or door mirrors. If any vehicle is detected, the system flashes the warning lights in the door mirrors and sounds a warning buzzer.

The new 2014 Toyota Land Cruiser retains the classic body-on-frame construction that helps define its exceptional off-road ability. This ruggedness doesn’t mean a sacrifice in the kind of comfort customers require for day-to-driving and Toyota has gone further, making details adjustments to the suspension to achieve an even better balance of stability and ride quality.

This applies both to the standard set-up and the Kinetic Dynamic Suspension System featured on higher grade models. The design retains the established independent double wishbone arrangement at the front and four-link rear set-up with lateral rod. On the standard system damper performance has been optimised, while the KDSS benefits from an increase in thickness/diameter for several components, including the front anti-roll bar to create smoother vehicle behaviour with revised front-to-rear weight transfer when cornering.

Which powertrains are available for the 2014 Land Cruiser?

In the UK, the 2014 Toyota Land Cruiser will continue to use its proven 188bhp 3.0-litre turbodiesel engine, matched to a five-speed automatic transmission. The four-cylinder, 16-valve unit has been revised to meet Euro 5+ emissions standards, but with no decrease in performance: 420Nm of torque is available from 1,600 to 3,000rpm and nought to 62mph acceleration is accomplished in 10.2 seconds (three-door) or 11.0 seconds (five-door); CO2 emissions have been reduced slightly to 209 and 214g/km for the three and five-door models respectively (performance data is subject to final homologation).