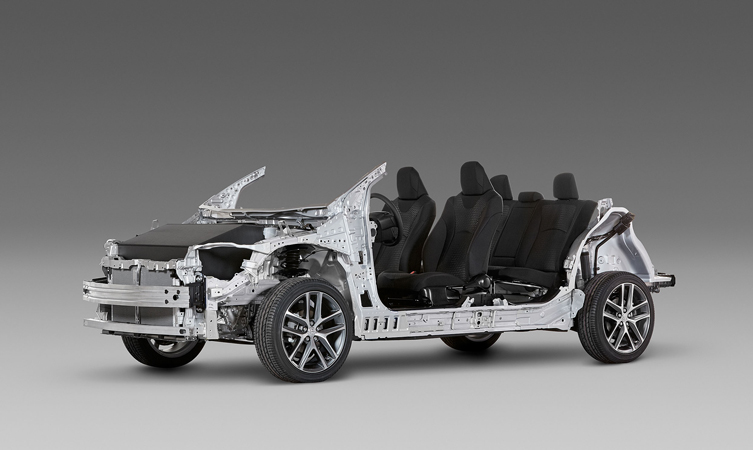 In the four years since Toyota announced its Global Vision and its commitment to making ever-better cars, it has made significant progress in working out and implementing the best ways to make this happen.

Achieving these goals and securing sustainable growth calls for a new approach to vehicle manufacturing, with big improvements in product development and in the competitiveness and efficiency of its factories.

The foundation for these changes is the Toyota New Global Architecture (TNGA) and the cultivation of a skilled and capable workforce.

MAKING BETTER CARS WITH TNGA
Toyota is taking a new, integrated approach to developing powertrain components and vehicle platforms, adopting measures which can also greatly improve the fundamental performance and appeal of its cars.

By grouping vehicle development with strategic sharing of parts and powertrain elements, it aims to reduce the call on its resources by 20 per cent or more. And by working even more closely with suppliers, Toyota intends to bring down costs further, making it possible to reinvest in developing advanced technologies and making its products even more attractive.

Powertrain components
Toyota is focusing on the joint development of vehicle powertrains and platforms to secure a lower centre of gravity for its vehicles, to make components lighter and more compact and to create unified designs. These factors can all contribute to better performance and fuel efficiency in cars that look more appealing and are more rewarding to drive.

Its hybrid systems are also being improved: Toyota is targeting a 15 per cent rise in fuel efficiency thanks to a re-think of the drive unit layout and the design of smaller electric motors, inverters and batteries.

Toyota will begin to introduce its new powertrains this year, while continuing to work on innovative hybrid systems, transmissions and engines. 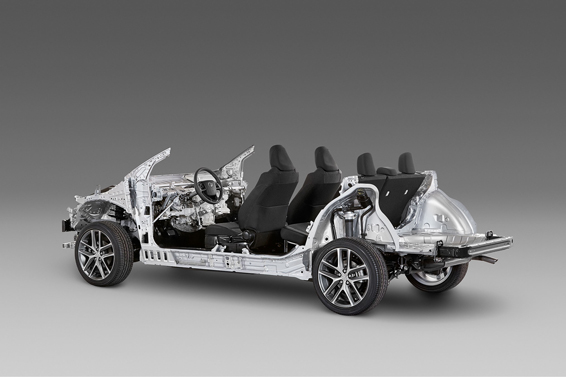 New vehicle platforms
Toyota is using innovations in vehicle underbodies and suspension systems to develop new platforms. By repositioning and lowering the centre of gravity of its powertrain components, it is better able to produce cars with attractive, low-set designs, responsive handling, a better drive feel and improved collision performances.

By rethinking the body structure, Toyota plans first to increase overall body rigidity by as much as 30 to 65 per cent, then to make further gains by using laser welding to join body components.

It will begin to roll out its new platforms with the launch of a mid-size front-wheel drive model this year, followed by specific new platforms for compact and large FWD vehicles and for rear-wheel drive cars. Toyota expects that by 2020, half the vehicles it sells worldwide will use the new platforms.

IMPROVING TOYOTA’S PRODUCTION SYSTEMS
Toyota put a freeze on new production plant projects, an intentional pause that has allowed it to focus on strengthening its competitiveness. It has been working to achieve full use of its existing facilities and reduce the amount of capital investment needed to set up production sites for new models.

As well as making its plants more competitive, it is also improving their environmental performance and safety.

To make its products more appealing, Toyota is developing production technologies that will make it easier than ever to turn new designs and feature ideas into reality. It is also doing more to cultivate its human resources capabilities ahead of embarking on its next stage of sustainable growth.

Toyota expects that by 2020, half the vehicles it sells worldwide will use the new platforms.

Full use of existing plants and facilities
Toyota has been making its production lines more versatile since 2013, linking production of same-model vehicles across multiple plants and making it possible to make thorough use of even the smallest surpluses in capacity at each site. As a result it has increased its total global load factor (line utilisation rate) from around 70 per cent in 2009 to more than 90 per cent today.

Although the roll-out of new TNGA platforms and powertrain components will temporarily require increased production line investment, work to reduce this requirement is still expected to result in lower investment levels than in 2008. And, because TNGA’s strategic parts sharing allows multiple platforms and powertrain components to be added to a line for mixed production, Toyota can respond flexibly to changes in demand and realise significant reductions in overall production line investment.

Increasing plant competitiveness
Toyota is approaching the point where it can expect to reduce the investment needed for a new plant by approximately 40 per cent, compared to 2008 levels. Key to this is the design of “simple and slim” production lines, for example by downsizing paint shops and switching to compact equipment that can be installed on top of the floor, rather than being suspended from the ceiling or fixed into the floor.

Through these combined projects, Toyota aims to run plants that are always competitive, rather than relying on volume to achieve results.

These initiatives are already helping bring new technologies into a number of mass-production models. They include revolutionary new forming techniques, which allow production of highly stylish components, and development of more advanced welding technologies that deliver greater body rigidity.