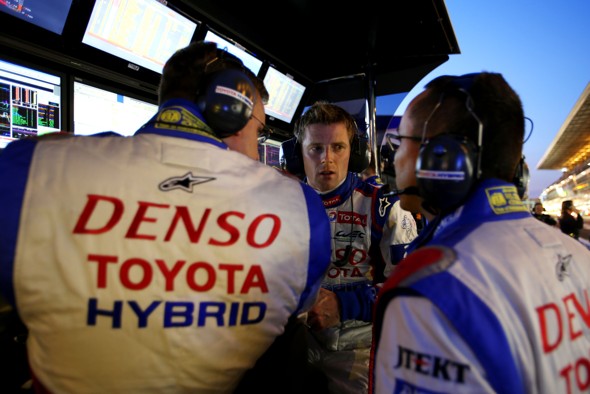 Kazuki Nakajima, who shares the #7 with Alex Wurz and Stéphane Sarrazin, became the first Japanese driver to earn the honour with a lap of 3mins 21.789secs, which also marked Toyota’s second pole position at Le Mans.

The #8 car of Anthony Davidson, Nicolas Lapierre and Sébastien Buemi will start Saturday’s race from third on the grid.

The starting grid for the 82nd Le Mans 24 Hours is decided by the fastest single lap from each car for any of the three qualifying sessions. After topping the timesheets in Wednesday afternoon’s free practice session, the team experienced a disrupted qualifying during the first session, finishing on Wednesday night with both TS040 Hybrids on the provisional second row.

Race organisers lengthened the third and final qualifying session, held on Thursday evening, by 30 minutes due to several red flag periods in the opening two sessions. Kazuki and Sébastien took the wheel for the start of final qualifying, immediately setting better lap times than in either earlier session.

Fine-tuning continued with all drivers taking turns to evaluate tyres and set-up before a final shoot-out for pole position, with Kazuki and Sébastien returning to the cockpit. However, a late yellow flag zone denied a big crowd the spectacle but confirmed that Toyota Racing will start from first and third.

Despite a 25% reduction in fuel consumption, the efficient 1000PS Toyota Hybrid System – Racing powertrain helped Toyota Racing record a 0.557secs improvement on last year’s pole position time of 3min 22.346secs. With two wins from the opening two FIA World Endurance Championship races, the TS040 Hybrid is setting the standard for efficiency and performance in the new era of endurance racing and that was indicated again.

Pole-sitter Kazuki Nakajima was delighted with his qualifying performance: “Even though it is a 24-hour race it is a very good feeling to be on pole position. I am really happy with the car so many thanks to team; we have prepared a great car for the race. I was struggling with the traffic but I managed to get one lap and it was just enough to get the pole. It’s going to be a tough race but tonight I am happy. We didn’t have to compromise our programme and we managed to put in the lap time for the right moment. Now I think we are well prepared for the race.”

Commenting on the team’s performance and the #8 car’s third-place qualifying result, Anthony Davidson said: “I am over the moon for the whole team for this lap that Kazuki put together. Congratulations to car #7 and the team. It feels like I didn’t really get to drive much at all in the final round of qualifying. The way it worked out, Séb was on a roll and we saw that the time was right to throw some new tyres his way and I am glad we did because the track was at its best at that point. He just kept running into traffic but finally managed to pop it into third. To start the race from the second row is good enough.”

The team now turns its attentions to preparing for Saturday’s race when it will challenge to win Toyota’s first Le Mans 24 Hours at the 16th attempt, with the race beginning at 3pm (CET). Our coverage of the world-famous race will continue to be linked from the Le Mans 2014 information hub, and you can also stay up-to-date with all the Toyota Racing action by following @Toyota_Hybrid on Twitter or ‘liking’ Toyota Motorsport’s official Facebook page.