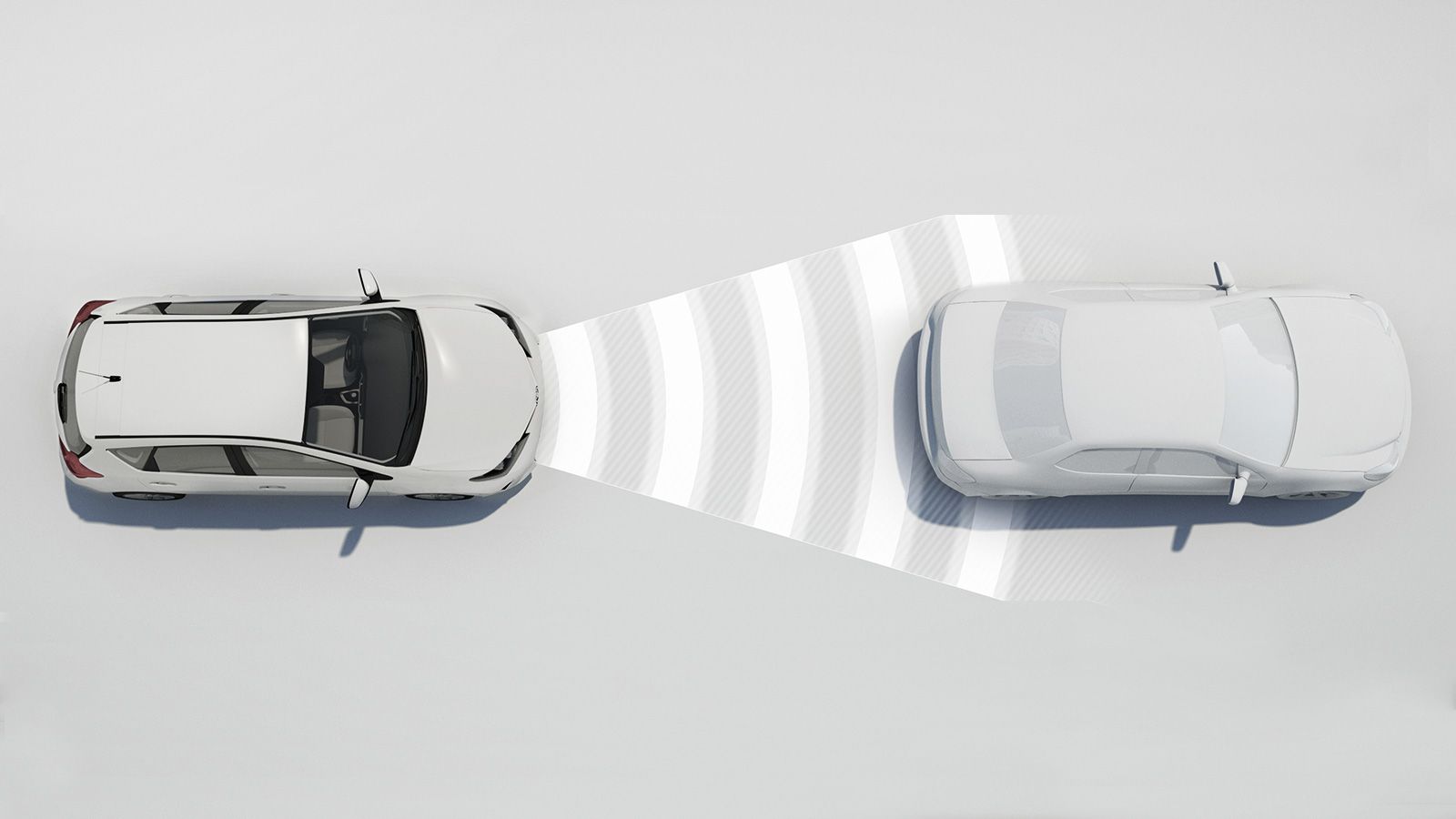 Toyota Safety Sense is a suite of active safety technologies designed to either prevent or mitigate accidents involving vehicles. From the introduction of this system in 2015 and through ongoing democratisation and further evolution, it is Toyota’s goal to completely eliminate road traffic accidents.

In addition to delivering these primary safety features, the millimetre-wave radar and forward-facing camera at the heart of these systems provided the expanded functionality of Adaptive Cruise Control and Road Sign Assist.

The second generation of Toyota Safety Sense was introduced in January 2018. It retained the same valuable features as before but due to the enhanced recognition capabilities of its new sensors, the system was now able to detect pedestrians at night and cyclists crossing the street during the day.

Pre-Collision System (PCS)
PCS scans the road ahead for vehicles, pedestrians and cyclists and recognises when there’s a possibility of a rear-end collision. When the possibility of a collision is detected the driver is alerted with audio and visual warnings and brake assistance is activated. If the driver fails to react in time the brakes automatically engage to prevent or mitigate a collision.

Lane Departure Alert (LDA)
Using a camera to detect the lane marking in the road ahead, LDA will inform the driver with audible and visual warnings if the vehicle starts to deviate from its lane without the turn indicator being applied—the driver can then take corrective action.

Automatic High Beam (AHB)
AHB is designed to optimise visibility during night driving for all road users. A camera detects the lights of oncoming vehicles and leading traffic while also monitoring the brightness of street lights. It switches automatically between high and low beam for safer night-time driving.

Road Sign Assist (RSA)
RSA monitors the road signs ahead, displaying useful information such as the current speed limit or overtaking restrictions. The system also provides a visual and acoustic warning if you are not following a road sign indication.

Adaptive Cruise Control (ACC)
ACC keeps you at a minimum pre-set distance from the vehicle in front. If this distance falls, the system reduces your speed and eventually the brakes will be applied. If the distance increases again, it will gradually accelerate until you return to your chosen cruising speed.

The advanced driving support functions provided by the millimetre-wave radar and forward-facing, single-lens camera were also strengthened with the inclusion of Lane Tracing Assist. This facility keeps the vehicle centred in its lane by helping the driver with steering control when Adaptive Cruise Control is in operation.

Within the space of five years, the total number of vehicles equipped with Toyota Safety Sense has reached more than 16 million in 108 countries and regions across the world. During that time, data has proved that the system has reduced rear-end collisions by 70%, and prevented 90% of accidents when combined with the Intelligent Clearance Sonar function that guards against low-speed impacts.

What can we expect next?

Development of the next-generation of Toyota Safety Sense system has focused on improving its adaptability, especially in the accident-prone areas around junctions. This includes detecting oncoming cars when turning right at junctions, and detecting pedestrians crossing the street when exiting a junction either to the left or right.

In addition to those vital areas of accident prevention, the following improvements will therefore soon be added to core Toyota Safety Sense functions:

Emergency Steering Assist – this enhanced function of the existing Pre-Collision System is able to detect when a pedestrian suddenly strays into the road and will provide steering assistance to help avoid a collision while remaining within the vehicle’s lane.

Driver Emergency Stop Assist – this system monitors the driver’s physical condition and creates a series of alerts if it detects that the steering wheel, accelerator or brakes have suddenly stopped being used. The system simultaneously alerts the driver and nearby vehicles by sounding the horn and activating the hazard lights, and will gradually bring the car to a stop. After stopping, the system will contact the emergency services for assistance.