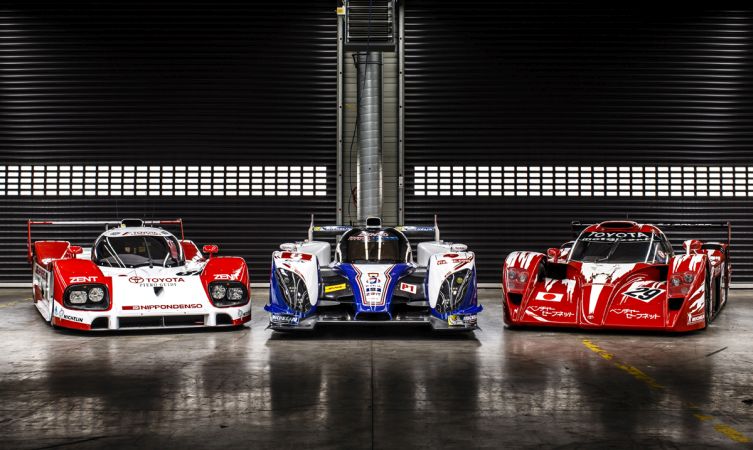 In this post we chart the models and vital statistics of the race cars that Toyota has entered in Le Mans, the halo event in the World Endurance Championship calendar. It begins in the mid-Eighties, when Toyota supported affiliated teams such as TOM’S and Dome prior to embarking on full, factory-supported works campaigns.

Toyota returned in 1986 with its now race-proven four-cylinder engine, run by team Dome. However, hopes for both cars were dashed. Reliability issues and regulations took both cars out of that year’s Le Mans race.

Evolved from the existing design, the new 87C was held on a short leash, with 1987’s Le Mans race being its only international fixture. It turned out to be a disaster, as both cars retired early in the race with mechanical issues.

Despite two years of setbacks, Toyota’s persistence at Le Mans was rewarded with well-deserved finishes for its two factory-backed cars in 1988: a respectable 12th and 15th in Group C1.

1989 marked Toyota’s first full season of racing in the World Endurance Championship. Of the three cars entered in Le Mans (one 88C and two revised 89C models), two had to withdraw following accidents, while the other suffered a mechanical issue.

This year saw Toyota made a big impression on the World Endurance Championship by securing its best-ever position at Le Mans, the #36 car finishing in sixth place.

Toyota pulled out all the stops in 1992, supplying three new TS010 and two 92C-V cars into the 60th 24 Hours of Le Mans race – our seventh attempt. The final battle resulted in Toyota securing second place, its long-desired podium finish.

With the news that the Japanese championship was cancelled, Toyota didn’t shelve its TS010 competitor but built a trio of new cars on the same chassis. The 1993 race (also joined by two 93C-V cars) saw the #36 car finish fourth.

Following the demise of Group C, in 1994 Toyota entrusted the 94C-V to Team Sard for entry in Le Mans in the LMP1 class. Having led for the majority of the race, victory appeared to be assured. However, last-hour problems meant the trophy unfortunately slipped from our hands. Still, second place was gratefully received.

Toyota tried a different tack in 1996. In a bid to continue filling the vacuum created by the demise of Group C, we supported Team Sard in modifying a Japanese GT Championship Supra to suit Le Mans specifications. It was equipped with the highly tuned 2.1-litre four-cylinder engine it had successfully campaigned over the past decade.

Team Sard returned to Le Mans in 1996 with its modified GT500 Supra but unfortunately was retired after an accident on lap 205.

The beautiful TS020 made its first competition appearance in the 1998 Le Mans race, qualifying in second. The three-driver team held second in the race until the final hour, when the #28 car was forced into retirement through transmission failure. The #27 car took the chequered flag in ninth position.

Toyota returned to Le Mans in 1999 with a new white-nosed car and swept all competition aside to claim first, second and third places in qualifying. During the race, however, the #1 and #2 cars were sidelined by separate accidents, while the #3 car made rapid progress. It posted a new lap record on its way to another second-place finish.

Toyota celebrated its Le Mans comeback in 2012 by entering two TS030 Hybrid models in the top LMP1 category – both equipped with a new full-scale capacitor-based hybrid racing system which represented a merging of the best hybrid and motorsport technologies. In the end, an accident and a powertrain issue meant both entries were unable to complete their Le Mans debut.

An identical name disguised a raft of alterations applied to the TS030 Hybrid to comply with new regulations. These include improvements to the chassis, powertrain and aerodynamic package to minimise the impact of regulatory weight increases. The 2013 Le Mans race netted Toyota both second and fourth-place finishes.

Now with a four-figure power output and four-wheel drive, the new TS040 Hybrid represented the most advanced technology in racing. Its naturally aspirated 3.7-litre V8 was paired with a similarly new super capacitor system that helped Toyota secure yet another podium – third place in the 2014 Le Mans race.

An updated TS040 Hybrid was unveiled for the 2015 season. Although its combined power output remained the same and it was in the same 6MJ race category, the super capacitor storage was more efficient. However, while the revised car was faster than its predecessor, rival machines proved to be extremely strong, which was reflected in sixth and eighth positions in Le Mans that year.

Significant regulation changes meant the new TS050 Hybrid was a very different animal to its predecessor. Now in the dedicated LMP1-Hybrid category, limitations were placed on energy consumption and fuel flow, which led to the introduction of a twin-turbo V6 petrol engine and 8MJ hybrid system running through lithium-ion batteries. This year’s Le Mans race delivered one of the event’s closest fights, with Toyota ultimately enduring a heart-breaking conclusion as victory slipped from our grasp in the closing moments.

Despite setting the fastest ever Le Mans lap time, Toyota endured a painful 24 Hours of Le Mans in 2017. Two of its TS050 Hybrid models failed to finish, while the remaining car finished came home in ninth place. Later, as one of the higher ranked cars was disqualified, the #8 car was officially raised to eighth place.

The 2018-2019 TS050 Hybrid (above) was largely the same as the 2017 car, which ended the season with three consecutive victories. However, every component was reviewed, with the biggest change being a weight reduction of the battery and its associated cooling system. Nevertheless, the power pack still generated about 300kW – more than ten times that of a current Prius.

The super-season included two visits to Le Mans. The first took place in 2018, where the TS050 Hybrid took the chequered flag in emphatic fashion, securing both first and second place in what was Toyota’s 20th entry in this world-famous race. The second race, which took place in June 2019, concluded with an identical one-two finish, although a final hour drama saw the #8 car switch places with the #7 car that had looked set for victory. During the course of the race the #7 car set a new race lap record.

In preparation for the 2019-2020 WEC season, the TS050 Hybrid was upgraded with new high-power lithium-ion battery cells and electrolytic solution. Further improvements were made in battery reliability in order to prevent deterioration in hybrid boost over the course of the 24 hours. In addition, the shape of the front of the car was aerodynamically honed with a higher nose profile and the side mirrors were embedded to reduce drag and increase downforce.

In order to comply with Equivalence of Technology regulations, weight was increased by 36kg to balance the difference between hybrid and non-hybrid cars. Success handicaps would also be added to further balance the field during the season.

The 2019-2020 season was due to conclude in June 2020. However, following the outbreak of COVID-19, some rounds of the series were postponed. In June, Toyota Gazoo Racing accepted an invitation to participate in the super-realistic virtual 24 Hours of Le Mans event, but with LMP1 hybrid cars digitised for this virtual event, the Toyota team participated in Oreca 07 LMP2 cars modified with a Toyota Gazoo Racing livery.

The GR010 Hybrid (above) is Toyota Gazoo Racing’s next generation of top-level WEC racer. Entered in the Hypercar class, the GR010 Hybrid is a completely new machine, sharing nothing other than a few sensors and switches with the outgoing TS050 Hybrid in terms of its chassis parts or hybrid system.

In order reduce costs within this category, regulations state that the vehicle’s aerodynamic package cannot be changed mid-season and that it can only have one front-mounted electric motor. Additionally, Toyota has reduced the number of overall components in order to increase cost savings. The internal combustion engine retains the V6 format of the TS050 Hybrid but its displacement has been increased from 2.4 to 3.5 litres, while the hybrid system consists of new, highly efficient batteries with a broader operating range, as well as more efficient inverters and motors.

The introduction of a Balance of Performance (BoP) regulation means it is no longer feasible to focus so completely on increasing engine output. Instead, Toyota has concentrated on increasing the driveability and reliability of the systems that control and integrate the 680PS engine and 272PS electric motor. Improvements have been particularly successful in anticipating and matching the vehicle’s response with the driver’s actions.

Outright speed is now regulated in the Hypercar class, so you can expect lap times at Le Mans to be around ten seconds slower compared to the outgoing LMP1 class. However, Toyota Gazoo Racing believes that the new GR010 Hybrid will be a strong contender for the first LMH class title and a fourth straight victory at Le Mans.