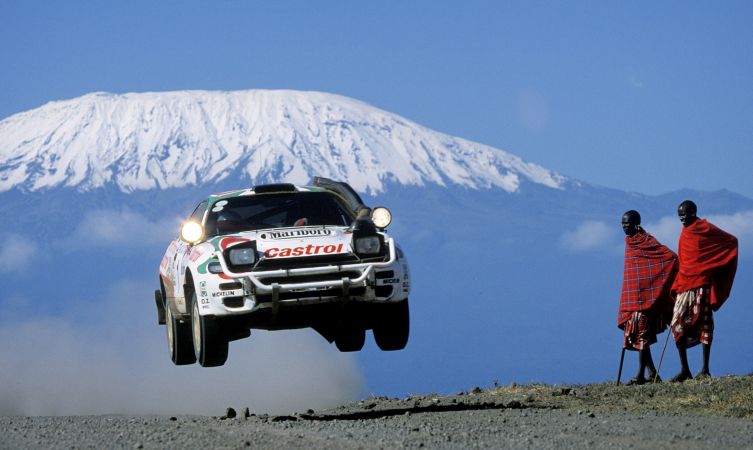 The Nineties was arguably the golden age of Toyota’s experience in world rallying.

A glimpse of what was in store had come right at the end of 1989, when Juha Kankkunen’s win in Australia ended a two-year drought for Toyota Team Europe (TTE) and the point at which a long period of technical endeavour finally paid off. 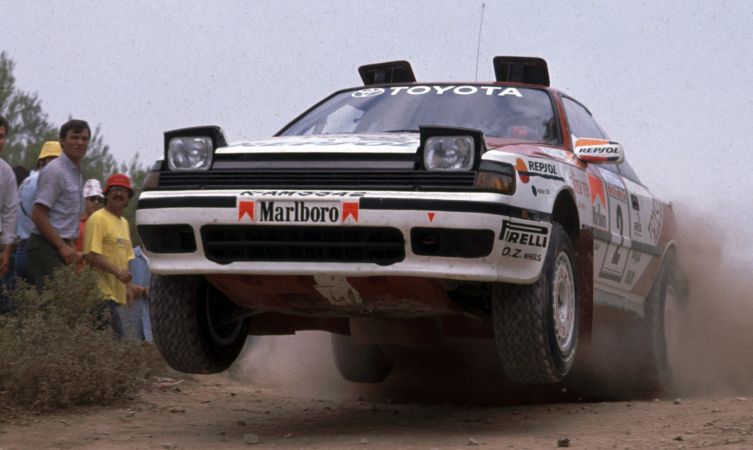 Carlos Sainz was the most consistently rapid driver in 1990, here seen in the ST165 on the Acropolis Rally

However, the 1990 season saw Toyota locked in a head-to-head battle with Lancia, the two manufacturers dividing almost equally the spoils of the World Rally Championship. Lancia won six of the rounds that year and secured the manufacturers’ title, while Toyota was only one behind with five wins but driver Carlos Sainz was the most consistently rapid and won the individual drivers’ title. Quite unknown to Carlos, his Antipodean podium result also won him the FIA’s Asia-Pacific title that year, in the days before WRC events could not count towards regional championships.

The following year both the top teams improved on their respective performances, with Toyota and Lancia winning six WRC rounds each. Unfortunately for the Toyota team, Lancia secured not only the manufacturers’ title but rubbed salt into the wound with ex-Toyota man Juha Kankkunen taking the drivers’ title as well. 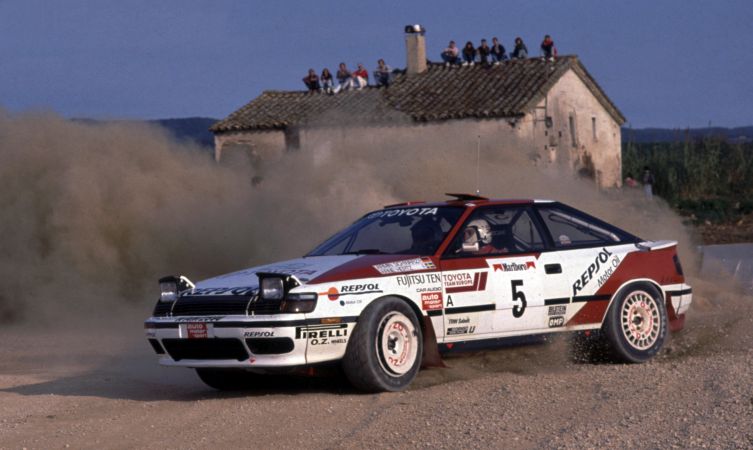 Although the ST165 Celica GT-Four was proving successful in action, the road-biased design of the car meant the team was kept busy tackling numerous technical issues relating to heat management in competition, not to mention handling all the other arrangements involved in participating in a full programme of WRC events.

Endless creative methods of drawing cold air into the engine bay were devised, including running with the bonnet left slightly ajar and the retractable headlights fixed in the upright position. Meanwhile, the sump guards were configured to help extract hot air. As if that wasn’t enough, the next challenge concerned the transmission, which could switch unpredictably from four-wheel drive to rear-wheel drive if the electronically-controlled differential got too hot. 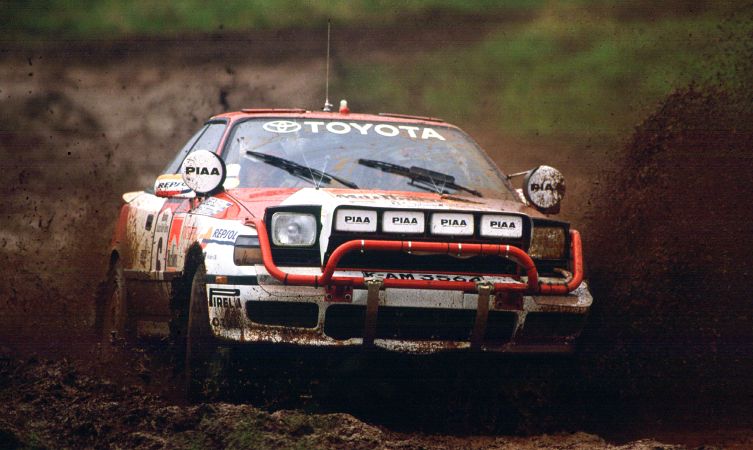 In response to these problems and in view of the approaching arrival of the next-generation Celica, TTE had been developing and appraising the replacement for the ST165 since the start of the decade. But despite its issues, the first all-wheel drive Celica had proved itself to be a formidable competitor, accumulating 13 outright wins in the World Rally Championship, a dozen of which under the governance of TTE. 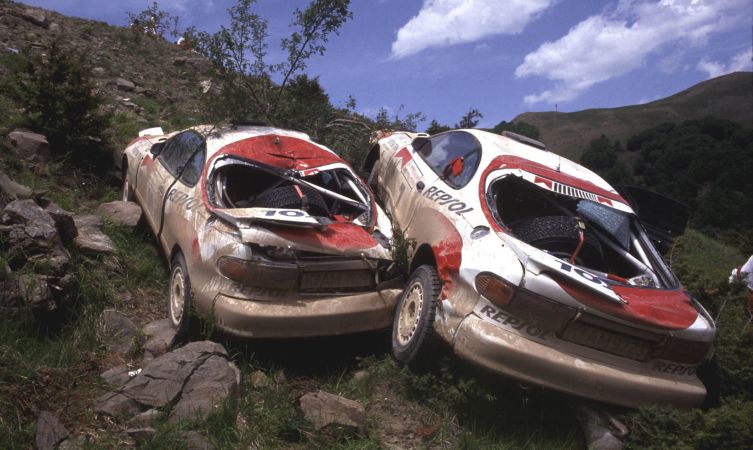 Early iterations of the ST185 had unpredictable chassis components, occasionally leading to incidents such as this on SS26 in the 1992 Acropolis Rally

The new ST185 Celica GT-Four was ostensibly a different animal but shared many of the traits of its predecessor. Homologated from the limited edition Carlos Sainz production model, it was remarkably reliable (the engine was identical) but its handling was deemed inferior to that of competitor vehicles and the differential technology remained problematic. Ironically, however, from its launch in 1992 to its final appearance in 1994 the ST185 went on to achieve 15 WRC wins, making it the most successful individual model in Toyota’s rallying history.

The ST185 Celica made its competition debut at the 1992 Monte Carlo rally but was immediately outpaced, with driver Carlos Sainz finishing over two minutes behind Didier Auriol in the winning Lancia. By the third rally of the season important handling issues had become apparent to TTE, yet by the fourth outing in the Safari Rally the car some elements had been rectified and the car was raised to winning form. This marked Toyota’s fifth overall win in Kenya and the first Safari win with a four-wheel drive car. So emphatic was it, in fact, that Celica GT-Fours took five of the top seven places in that event. 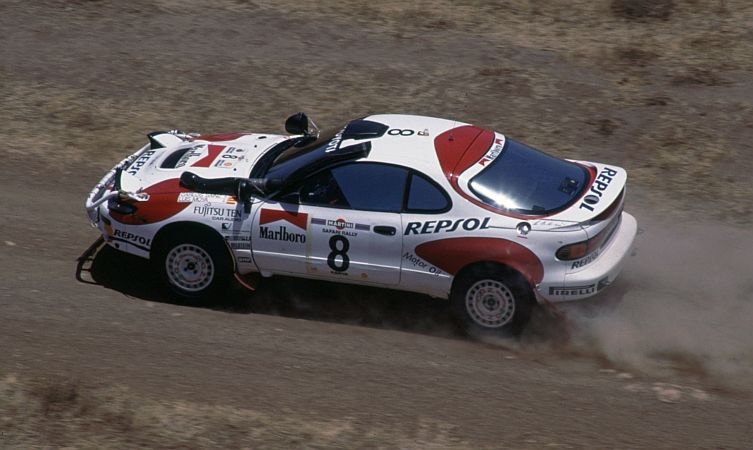 One of the keys to the success of the ST185 was a decision to delete the electronics controlling the centre differential and run it in a locked configuration. Though prone to understeer, the handling became more predictable. Victories flowed in New Zealand, Spain and Britain, with Sainz winning his second and final world driver’s title with Toyota before leaving when Castrol joined the team as the new lubricant sponsor. 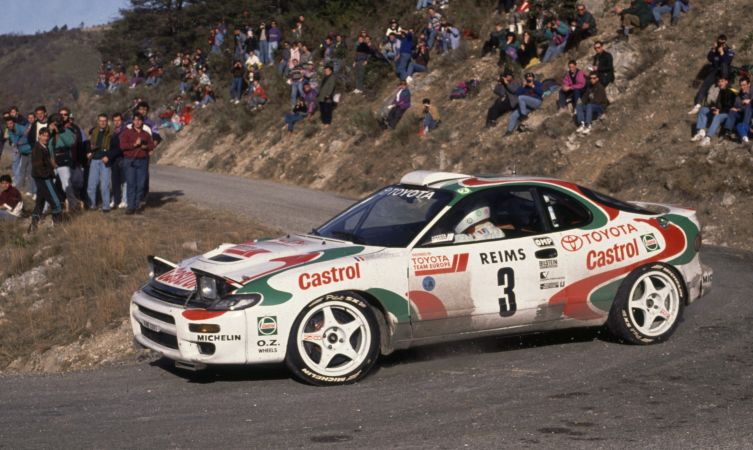 Further changes arrived with the 1993 season, notably Frenchman Didier Auriol joining Toyota from Lancia. With strength restored, success continued for TTE, the team winning seven rallies that year – five at the hands of Juha Kankkunen, one by newcomer Auriol and the other by Swede Mats Jonsson in his first appearance in a full works car. Toyota went on to win the manufacturers’ title and Toyota man Kankkunen took the drivers’ title after competing with no less than three different co-drivers during the same season. 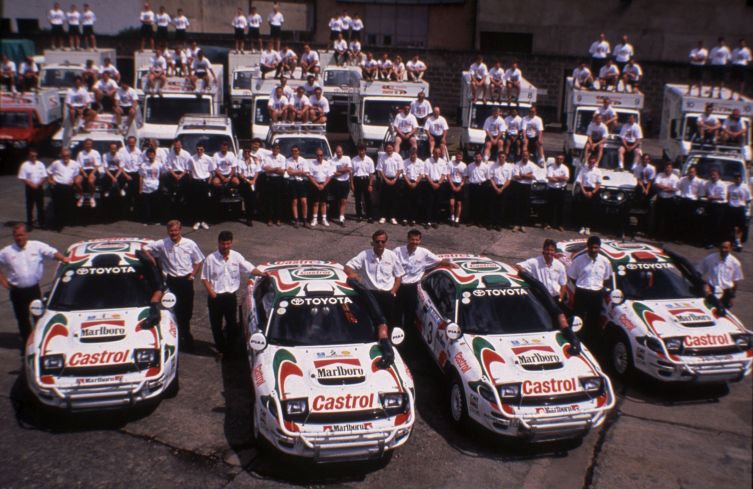 By the end of 1993 it was obvious that pressure at the top of the sport was increasing. In a shock move, Lancia stopped its official WRC activities, and the threat from Subaru was beginning to be felt with three podium finishes during the season. 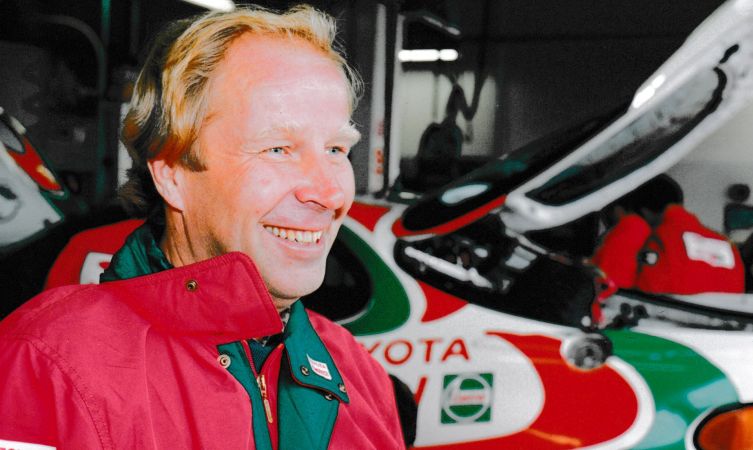 The final year of official competition for the ST185 was 1994. It was another phenomenally successful year, with the team again winning both world titles – the manufacturers’ crown as early as August. In many ways the ST185 represented the pinnacle of Toyota in rallying but it was from its final word as the next-generation ST205 model was on its way.

Any earlier engine advantage of the Celica was negated by a new 34mm turbo restrictor (reduced from 38mm) and the handling complicated by a sophisticated suspension design. But it also had superior aerodynamics, broader arches that allowed for 18″ wheels to be used on asphalt, a stiffer chassis, water injection, as well as greater opportunities for under-bonnet cooling.

The Group A specification ST205 Celica GT-Four first appeared in competition at the non-championship Rally Australia, when Kankkunen finished second overall, unable to match the pace of the winning Subaru of Colin McRae. It was a podium position Kankkunen replicated for the car’s full WRC debut in Great Britain, finishing in second again behind McRae. Meanwhile, Auriol finished sixth in the previous generation ST185, which was enough to gain him the drivers’ title after Carlos Sainz went off the road in his Subaru. 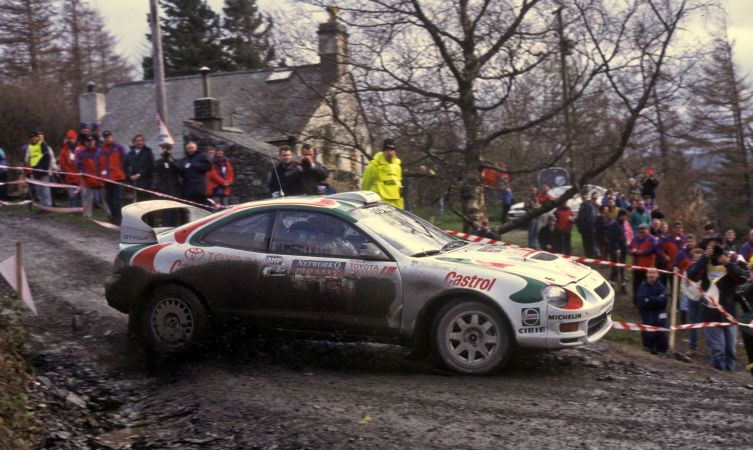 The first full WRC appearance for the new ST205 Celica was at the end of 1994 in the UK, where Kankkunen finished in second place

With the exception of the non-championship Safari Rally, which was notable for being the ST185’s last victory, the new ST205 model was TTE’s dedicated weapon in 1995. But the team struggled, not only against Subaru but also the newly competitive Mitsubishi. Kankkunen came second in Portugal but then Auriol won in Corsica, his sixth win on that event, and notable for being the model’s only WRC victory. New Zealand saw Toyota achieve an impressive two-three-four finish, albeit beaten to the top position once again by Sainz in a Subaru.

The story of the ST205 is tainted by events which unfolded in the second part of the year. A keen-eyed FIA official watching the cars on the side-by-side special stage in Australia was surprised to see the ST205s out-dragging their rival machines. This led to a series of enquires, which came to a head in Spain. 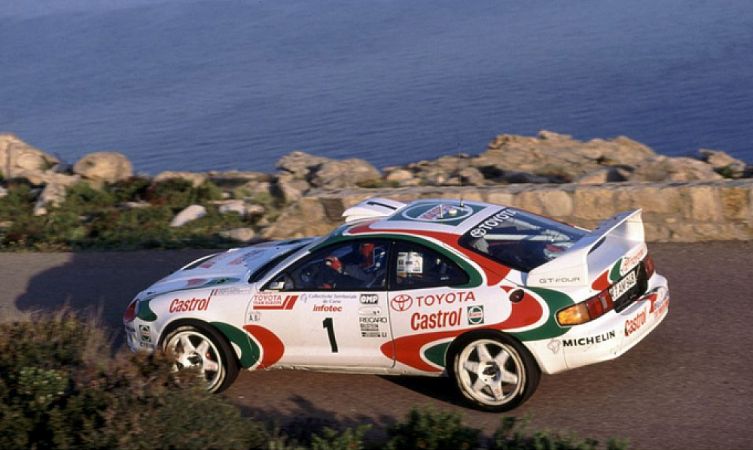 Never enthusiastic about rallying on asphalt, Kankkunen held the lead for over half the race distance before both he and team-mate Armin Schwartz went off the road, leaving only Auriol remaining. Scrutineers arrived and seized the team’s spare turbochargers, the result of which was the discovery of unauthorised modifications that led to Auriol’s exclusion, the removal of all championship points gained by the team so far that season, and exclusion from the World Rally Championship for the next 12 months.

Disappointing as this was, the ruling did not signal the end of the ST205 model in world rallying. Italian company HF Grifone ran Armin Schwarz in the 1996 European Rally Champion, which he won; Rui Madeira also won the non-championship Rally of Portugal, Freddy Loix won the 24 Heures d’Ypres Rally, and Schwarz took another title in the non-championship Network Q RAC Rally. 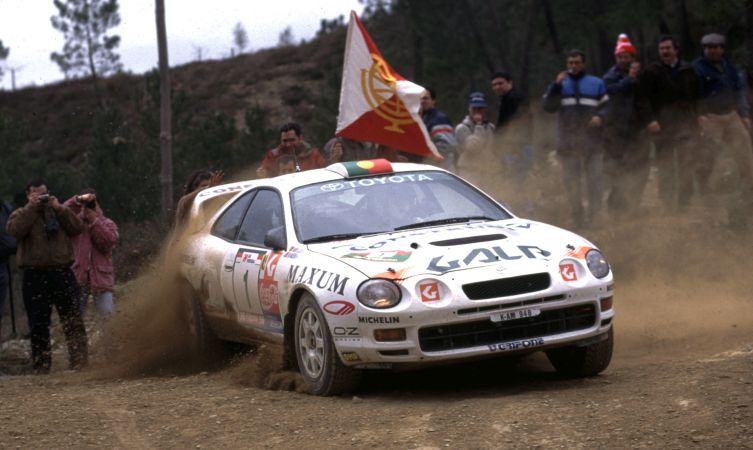 During its hiatus from the WRC, TTE was active behind the scenes preparing its rallying future, which lay with the new Toyota Corolla World Rally Car. This represented a major change in direction for two reasons. Firstly, the Celica was no longer Toyota’s dedicated car for competition; and secondly, the purpose of Toyota’s entry into world rallying was not to promote a sporty image for the company, more a means to promote the abilities of one particular mass production model.

The eighth-generation (E110 chassis) Corolla became the model that represented Toyota in the championship from 1998 through to 2000. It made its competition debut in Finland in 1997 at the Mantta Rally, the pre-1000 Lakes test event, as well as selected other appearances during that year. 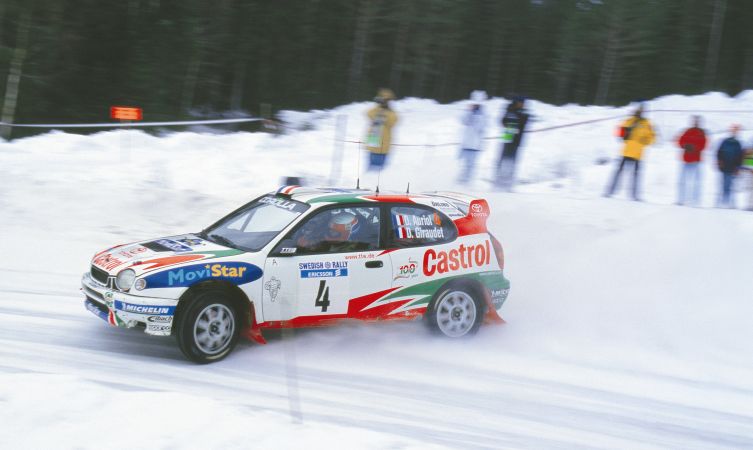 The 1998 season started encouragingly for the new car, with Carlos Sainz beginning a season in which the car proved very reliable for him. He was victorious at Monte Carlo and achieved seven other podium finishes, while team-mate Didier Auriol had a less impressive season but still won in Catalunya. Throughout the season Sainz was locked in a championship struggle against Tommi Makinen’s Mitsubishi, which was finally and spectacularly settled when Sainz’s engine failed near the end of the final special stage on the final round. This not only denied Sainz the drivers’ title but Toyota the manufacturers’ title as well. 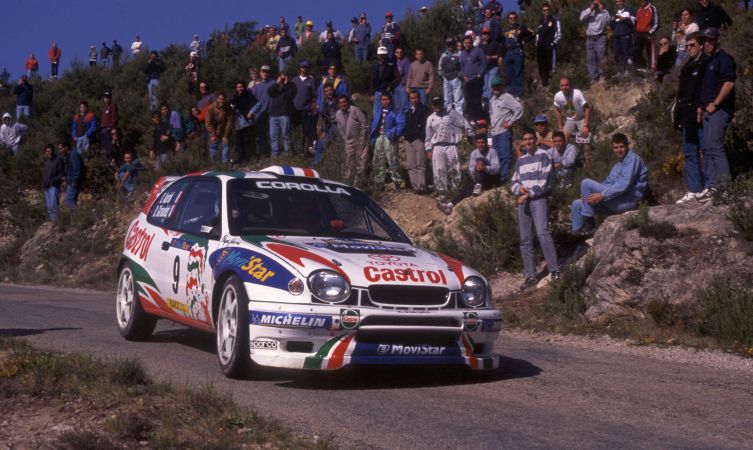 Onward into 1999 and the second season of the Corolla WRC programme, hopes were high that results would improve with lightweight body panels and an engine change. The old Celica-based 3S-GTE engine was replaced with a new but closely related unit from the company’s Lexus range, with bigger valves and more free-flowing induction. 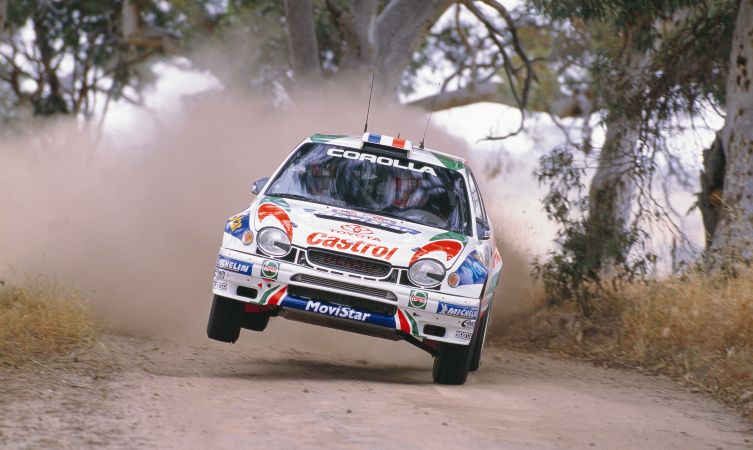 In terms of outright race wins, Toyota won just one WRC event in 1999 – the one and only time the championship had been to China. However, the team’s impressive consistency proved more effective than occasional outright results. Toyota won the manufacturers’ championship by gaining points in 13 of the 14 qualifying rounds; more than any other manufacturer. 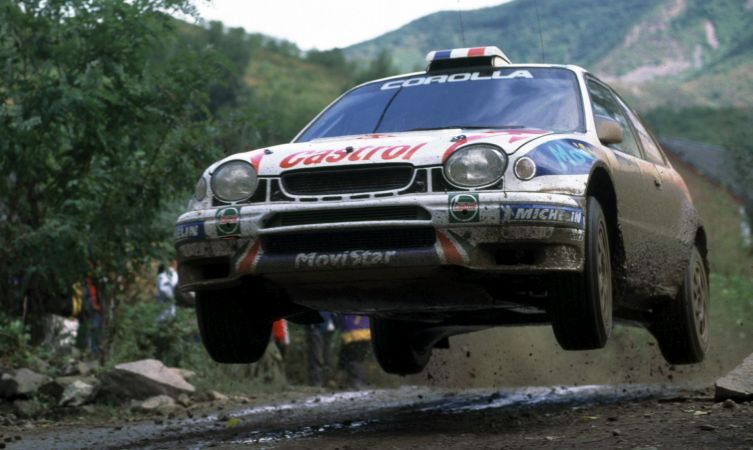 The WRC programme had been successful for Toyota and the Corolla model; in fact, so successful in terms of marketing that Toyota decided to pull out of the championship one year early in order to concentrate on a new motorsport project – Formula 1. But the tradition of Toyota in rallying did not end there. 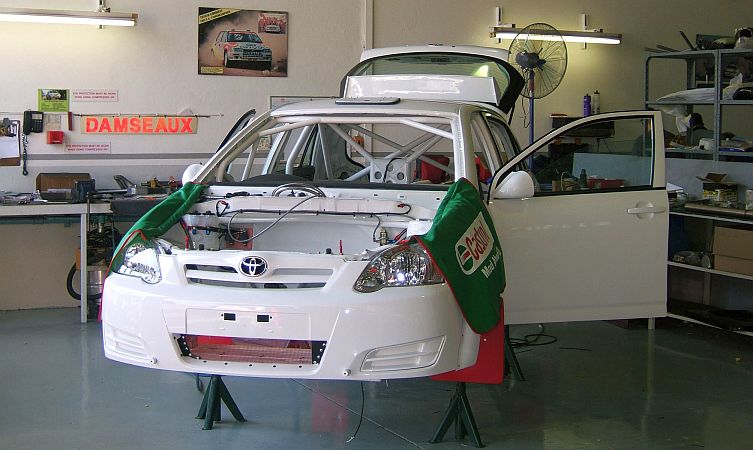 Into the new Millennium, Toyota South Africa was the first company to prepare a car for the new Super 2000 formula

Five years later, Toyota South Africa embraced the new Super 2000 formula, and a decade further on chairman Akio Toyoda revealed his appreciation for the sport that Toyota had been noticeably absent from for many years and authorised a new World Rally Championship project.