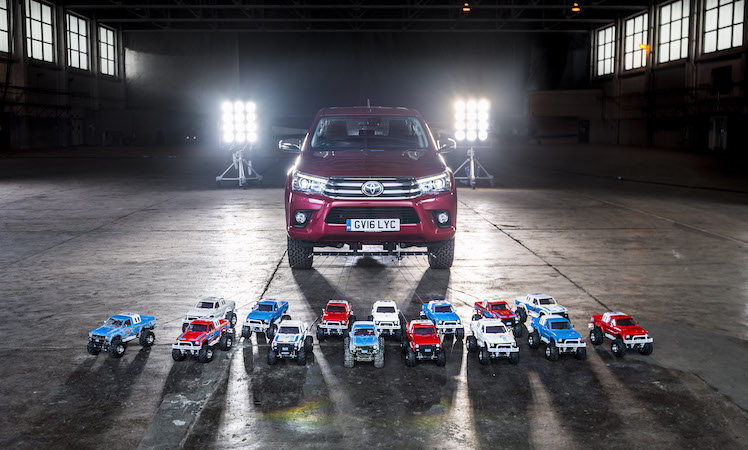 The Toyota Hilux has sealed its status as one of the world’s toughest vehicles by braving the world’s most extreme environments.

Smaller in size if not in reputation, the Tamiya Hilux Bruiser 4X4 has a huge global following as the “Hog Heaven” hero of the radio-controlled model world. Now these two iconic machines, big and small, have been brought together in a series of challenges that put their impressive strengths to the test.

The results are captured in a series of short films, Hilux: Little & Large.

The action puts the full-size Toyota and the Tamiya model through authentic, real world tests, side-by-side. In each case there is no trickery; the challenges show the genuine capabilities of both the Hilux and the Bruiser, a 1:10 scale kit that itself is based on an earlier Hilux design.

We took inspiration for the films from a famous 1980s stunt in which a fleet of radio-controlled Bruisers successfully hauled a Hilux at Tamiya’s headquarters in Japan. Fast forward to today and Hilux has become a much bigger and heavier vehicle; could the miniature machines repeat the feat? This challenge forms the subject of Pull, one of our new short films. 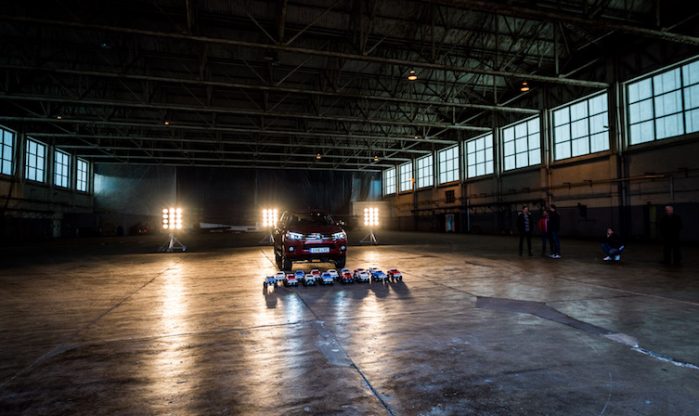 Before shooting began, precise calculations were made that showed, on paper at least, that the task could be accomplished. A Toyota Hilux Invincible Double Cab has a gross weight of 3.21 tonnes; each radio-controlled Tamiya Bruiser can generate 2kg of pulling force, so between them 15 cars have 30kg of muscle, when exerting maximum power on a flat surface – theoretically enough to set the Toyota rolling. 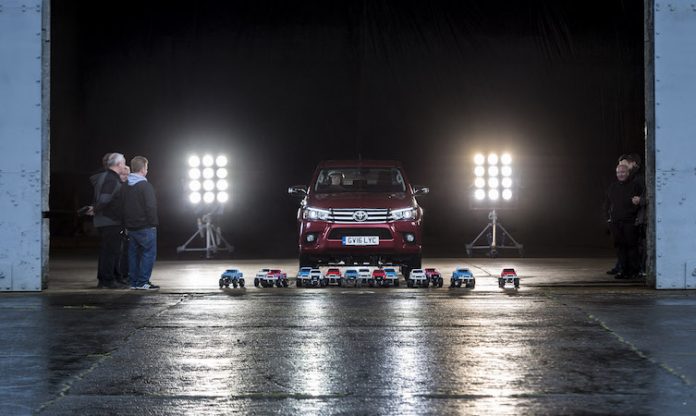 The practical test took place inside a giant hangar at Bicester Heritage in Oxfordshire. To help the Bruisers gain traction, two 500g diving weights were placed behind the cab section of each vehicle. 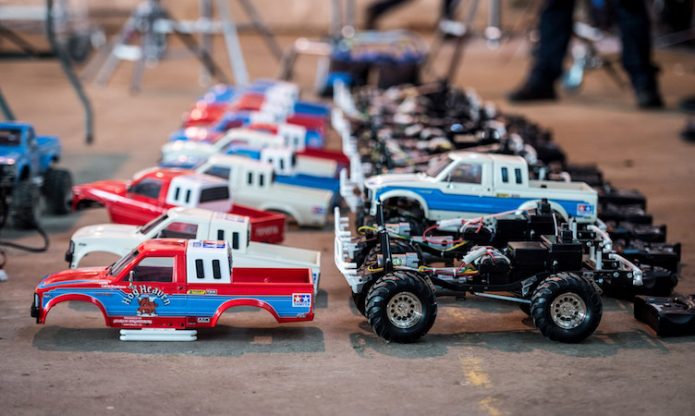 Just as crucial was the method for connecting the models to the Hilux. This called for the design of a dedicated towing arm, made from steel and featuring 15 separate eyelets, one for each towing cable, set level with the Bruisers’ towing points. The 10kg unit was then bolted to the Hilux’s standard front tow points. 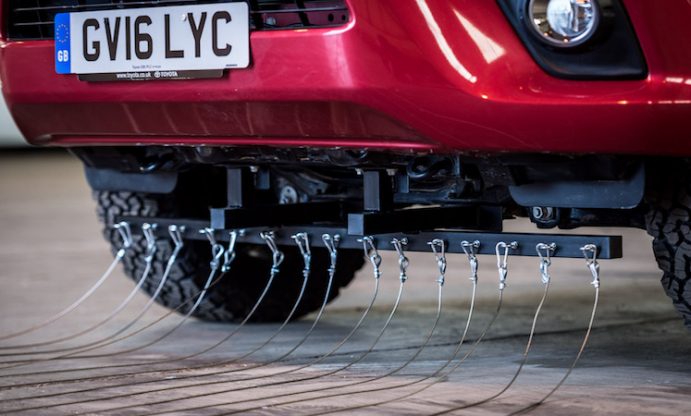 The “driving” duties were performed by a crack team of radio-control model experts with the skills to ensure the models moved off in perfect synchronisation and with the optimum power delivery. A driver also sat at the wheel of the Hilux, with the engine turned off, the brakes released and the transmission in neutral. 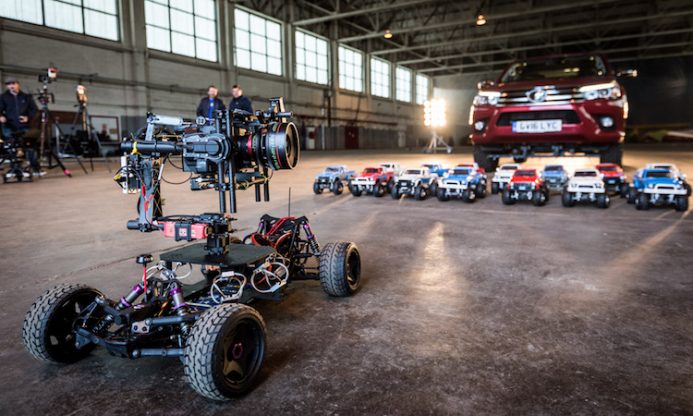 The film captures both the tension of the challenge and the fun character of the Bruisers as they join forces for their special mission, with action footage obtained using a bespoke camera crane mounted on a radio-controlled buggy. Specially constructed for the production, this machine was able to reach speeds above 30mph, as well as provide an RC-car perspective on the action. 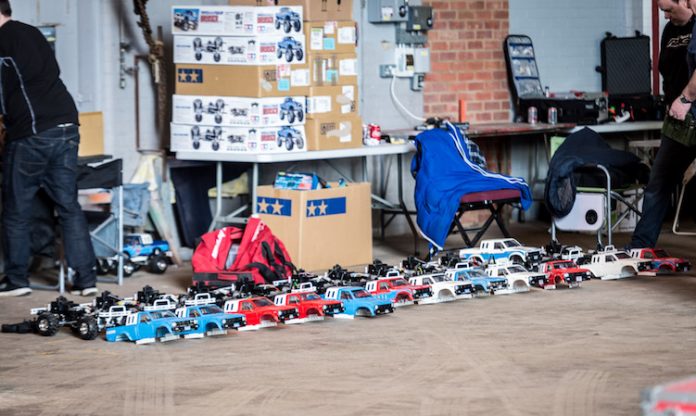 The other films in the series, Tow, Wade and Mud, follow the further exploits of Hilux and its famous sidekick. Tamiya assembled and maintained the vehicles throughout all the filming. 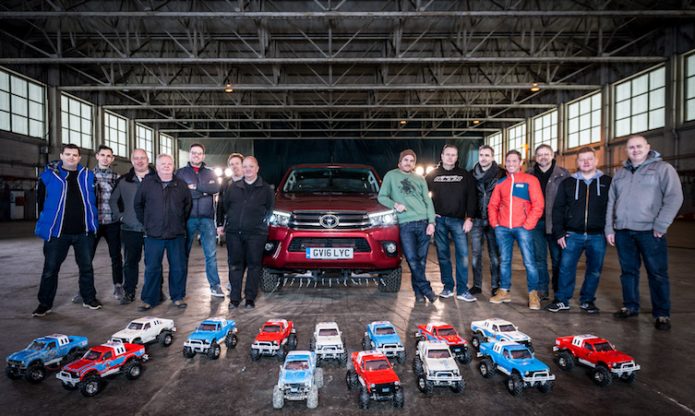 Hilux Little and Large: Behind the Scenes

In this follow-up film we take a look behind the shoot of the Hilux Little and Large series.