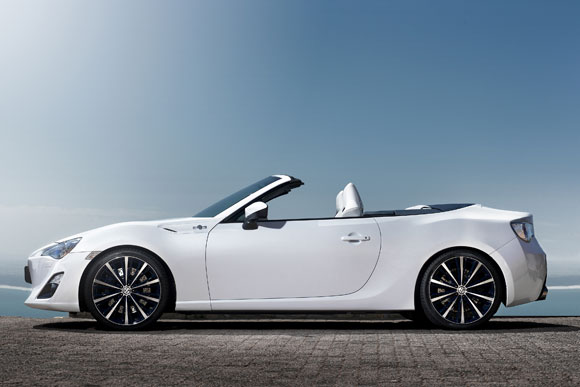 Back in 2013, a design study of a Toyota GT86 convertible was unveiled, previewing a possible future development of the award-winning sports coupe. The long-awaited convertible concept version was officially revealed at the 2013 Geneva motor show.

Named the FT-86 Open concept, the Geneva show concept ‘previewed a possible future development of the award-winning GT86 sports coupe’, according to an official statement from Toyota.

Testing of a prototype version of the GT86 convertible was already underway at the time, and the show car’s debut was intended to help Toyota gauge the public reaction to the idea of an open-top GT86.

The first official images and more details of the GT86 convertible concept were issued in early March 2013, just ahead of the car’s public debut.

The concept was designed to deliver the lively, highly engaging and accessible performance and dynamic abilities of the GT86 with the added appeal of top-down motoring. The soft-top design allowed a 2+2 seating format to be retained, with little impact on boot space.

Its external dimensions match those of the coupe (length 4240mm, width 1750mm, height 1270mm), with the fixed hard-top replaced by a multi-layered fabric roof that folds down behind the fixed rear seats, and a glass rear screen.

The GT86 convertible shown at the Geneva motor show sported a special pure bright white and navy blue colour scheme designed by Toyota Boshoku Milan Design (TBMD) to capture the spirit and atmosphere of Milan, one of the world’s leading centres for fashion and design.

The bodywork was finished in white, contrasting with the blue of the roof. Inside, the perforated white leather upholstery was layered over a navy blue backing, with golden yellow accent stitching and carpets.

Similarities with the GT86 coupe

The GT86 convertible concept used the same platform and powertrain as the GT86. At its heart is the naturally aspirated, horizontally opposed 1998cc four cylinder ‘boxer’ engine.

Equipped with Toyota’s D-4S direct injection technology, this compact unit was set low, helping lower the car’s overall centre of gravity, and capable of producing 100bhp per litre. It drives the rear wheels through a short-throw, six-speed manual gear shift or a six-speed automatic.

Toyota has pinpointed numerous areas that will need further engineering evaluation to assess the impact of the cabriolet design on performance, vehicle  rigidity, balance, weight and aerodynamics.

However, with features such as frameless doors, the GT86 was designed with the development of a cabriolet in mind, which means the impact on structural rigidity by converting to an open-top design should not be great. Efficient measures to preserve rigidity are being analysed, such as the use of door lock reinforcements.

GT86 has a near-perfect 53:47 front-to-rear weight distribution, helping deliver ideal response to even subtle steering, throttle and brake inputs, and a low, 460mm centre of gravity – no wonder it’s taken car of the year awards from Top Gear, Auto Express and Autocar.

While introducing a fabric roof is likely to bring the centre of gravity even lower, further engineering analysis will be needed for the GT86 convertible to match the balance of the coupe.

GT86 tips the scales at only 1257kg, thanks to comprehensive weight-saving measures, giving the car a power-to-weight ratio of around 160bhp per tonne.

This is crucial to performance, given the car uses an engine with a relatively small capacity. Engineering the cabriolet to be ‘weight-neutral’ relative to the coupe will be a key area of study should Toyota decided to progress with the project.

What happened to the GT86 convertible concept?

The GT86 convertible concept made a subsequent appearances at the 2013 Tokyo motor show, where it was shown in a striking new red and grey colour scheme. However, in the end the car never made it past the concept stage, leaving us with a few tantalising glimpses of what might have been.