The new Toyota GR Supra has made an outstanding impression in its debut Super GT season. Developed to comply with both GT500 and DTM (Deutsche Tourenwagen Masters) specifications, the GR Supra was one of three all-new models among the 2020 Super GT line-up.

Run by six of the 15 teams in the top-tier GT500 class this season, the new GR Supra represents the latest in race car technology and a further evolution of the know-how that saw Toyota Motor Corporation win the 2019 championship. 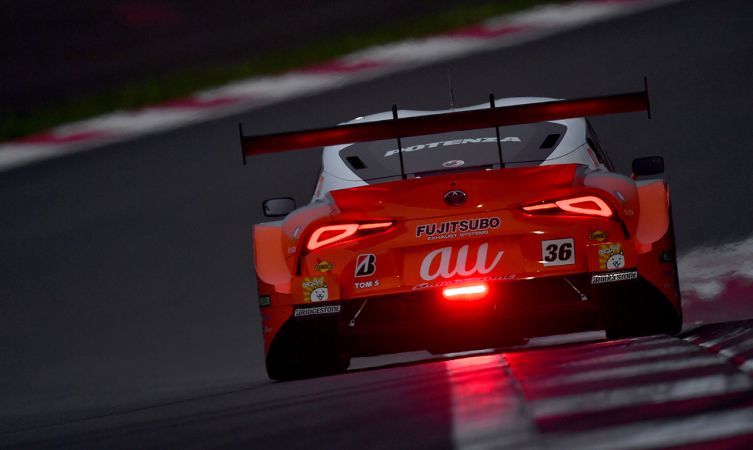 We have reviewed each round of the 2020 Super GT season as the GR Supra GT500 completed its debut campaign in this exciting and unpredictable series.

Round eight marked the fourth and final visit to Fuji Speedway. From a mathematical perspective, nine teams and 16 drivers stood a chance of winning the series title. Among them was the round one winner #37 KeePer TOM’S GR Supra, which started the race in pole position. Although the lead was lost in a first-lap shuffle, #37 regained first place on lap six. The GR Supra held its place until making its pit stop on lap 23, and after returning to the race was able to reassume the lead on lap 27 and begin pulling away from the following pack. 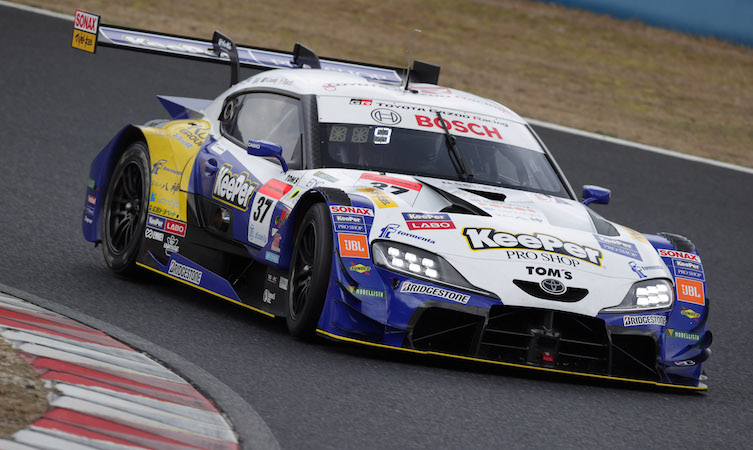 The second half of the race saw the #37 car accumulate a 16-second lead by lap 40. After this point, however, the lap times slowed noticeably and the second-place car was able to narrow the gap to just two seconds by lap 62. This prompted the GR Supra driver to speed back up again but it soon became obvious that the reason for having slowed down was to conserve fuel. By the last corner, the fuel supply had disappeared entirely and the Toyota team had to coast across the finish line, but not before the #100 car had slipped past to take the chequered flag.

Below is a short, two-minute review of the race (Japanese language only).

Though current holder of the most pole positions in the GT500 class, Yuji Tachikawa was only able to secure a sixth place start for the Zent team around the Twin Ring Motegi circuit. However, fellow GR Supra driver Yuji Kunimoto went one better in the WedsSport Advan car with fifth place in the starting line-up for the 300km, 63-lap race. 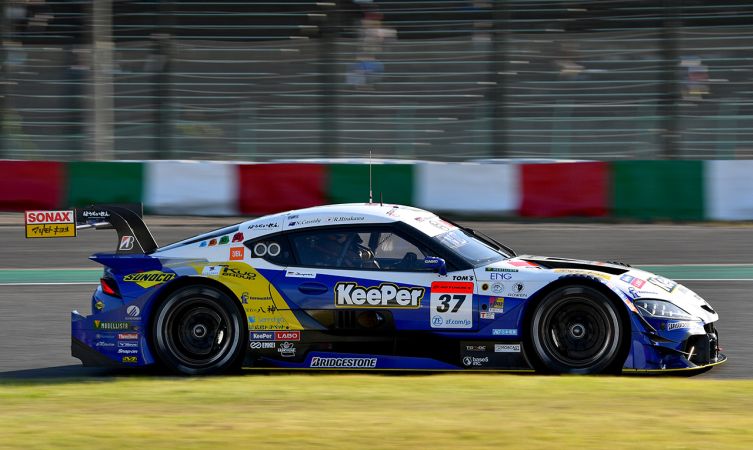 The penultimate round of the 2020 season did not favour the GR Supra competitors and has shaken-up the championship in advance of what will now be a nail-biting finale at the Fuji circuit. The best result was a disappointing sixth-place finish for the #37 KeePer TOM’S GR Supra, which means that driver Ryo Hirakawa now shares his lead at the top of the drivers’ championship while his crew shares second place in the team championship.

Starting from the second row of the starting grid at Suzuka circuit, the #19 WedSport Advan GR Supra held on to its position until lap five. But it wasn’t until lap 20 that the pack really started to get shuffled. The routine pit stop created a new leader, while an extended Safety Car session from lap 22 to 27 allowed the changeover drivers to warm their tyres without the risk of being overtaken. 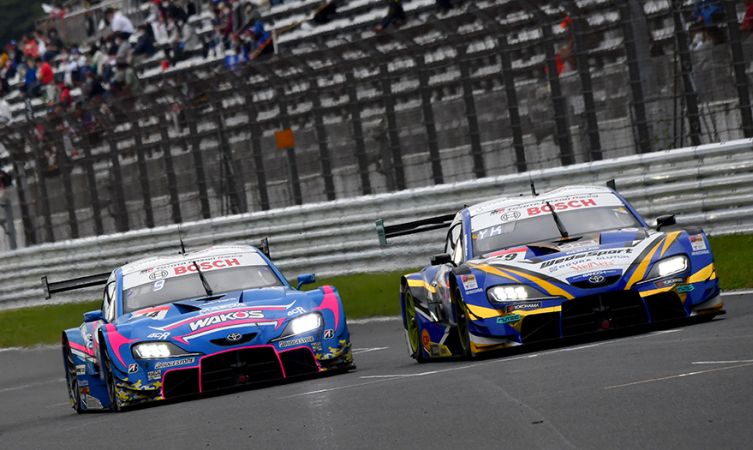 From lap 35 onwards, challengers were nipping at the heels of the two lead cars, and by lap 49 a four-car battle had ensued for second place. Among these was the #38 Zent GR Supra driven by Hiroaki Ishiura, though he ultimately crossed the finishing line in fifth, the highest position among the GR Supra models at Suzuka. After having to make two pit stops, championship leader #14 Wako’s 4CR GR Supra was only able to score three points in this round. Nevertheless, the team remains at the top of the team and drivers’ championships.

Round five marked the first race of the season where spectators were allowed, albeit under very limited conditions. This perhaps prompted an unusual amount of fierce battles from the start and a safety car intervention that lasted from lap two to lap five. However, by lap 13 the competitors had got back into their stride and begun changing the order without wreaking havoc. 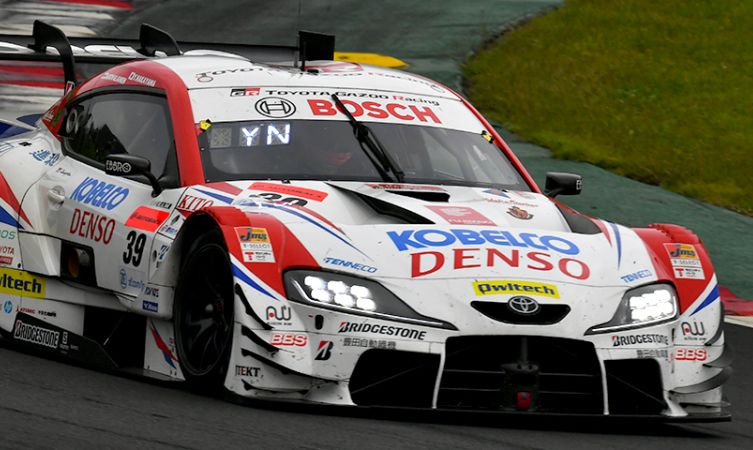 Watching the front-line action from the safety of position five, Heikki Kovalainen in the #39 Denso Kobelco Sard GR Supra was able to capitalise on the mistakes of others, rising to third before making his routine pit stop and driver change on lap 26. A super-quick turnaround meant that by the time all GT500 competitors had completed their pit stops, the #39 GR Supra – now driven by Nakayama Yuichi – was elevated into the lead. By the final, 66th lap, Yuichi had extended his lead to a huge, ten second margin, securing the team a decisive first win of the season.

Following the conclusion of round five, teams running the GT500 specification GR Supra models now occupy the first two positions in both the teams’ and drivers’ championships.

Official qualifying around the Twin Ring Motegi circuit saw Yuji Tachikawa secure fastest time in the #38 Zent GR Supra, and in so doing extended his own series record for the most pole positions achieved by a single driver. Experience his qualifying lap in the video below.

Although Tachikawa was able to capitalise on this advantage from the race’s formation start, the #38 car could not establish a clear lead and was eventually overtaken on lap eight. However, through a Safety Car session and the first round of pit stops, the margin between the lead car and the Zent GR Supra had closed to a little over four seconds. 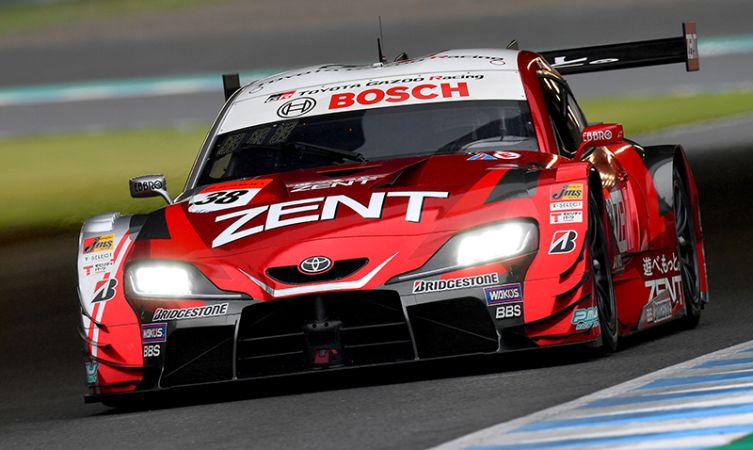 During the second half of the 62-lap race, Hiroaki Ishiura was given no chance to catch the leader or improve the position of the #38 Supra. He therefore finished in second place, 7.8 seconds behind #17’s Koudai Tsukakoshi, who had been unbeatable in the familiar surroundings of his home track. While this result has elevated team Keihin Real Racing into second place in the championship, the Toyota Gazoo Racing-supported au TOM’S retains its position at the top of the leader board.

Round three was a 52-lap, 300km chase around Suzuka circuit, interrupted by three Safety Car interventions. The first took place on the opening lap, and when the race was eventually restarted on lap five car #64 began to open up a lead. However, by the sixth circuit the #38 Zent GR Supra had moved up into second and was putting pressure on the leader. Not long afterwards, the #14 Wako’s GR Supra had also caught up, creating an exciting, five-car brawl for the front. 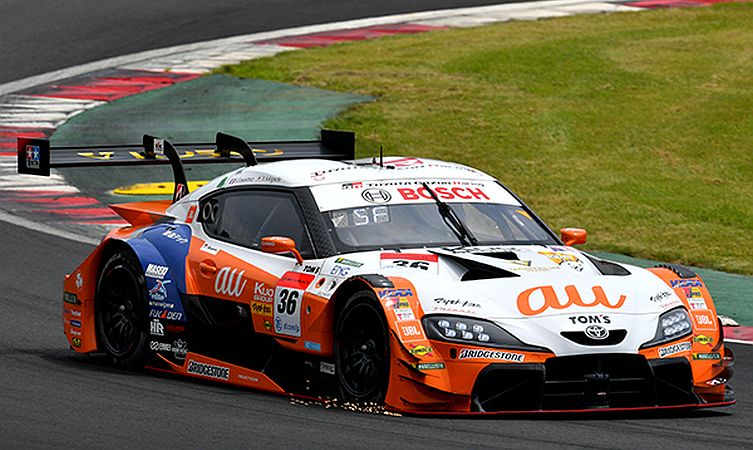 The appearance of an errant bonnet in the middle of the track on lap 16 prompted the second Safety Car outing, but this coincided with many of the teams’ routine pit stops. At this point, the Zent car was experiencing gearbox trouble and did not rejoin the race, which left the #36 au TOM’S GR Supra as the most likely Toyota to compete for the lead. Starting from 12th on the grid, the au TOM’S team had worked its way steadily through the pack and through the third Safety Car stoppage to a third place finish. This result marked the team’s third consecutive podium finish and consolidated its position at the top of the championship.

A disappointing qualifying session meant that none of the six GR Supra models stood on the front row of the starting grid, which in turn elicited a fierce battle for position as the pack filtered through turn one of Fuji Speedway. However, as the initial adrenaline rush eased off, it was the #36 GR Supra driven by Yuhi Sekiguchi and Sacha Fenestraz that continued its momentum. By lap 24 the distinctive orange and white machine had risen back into third position. 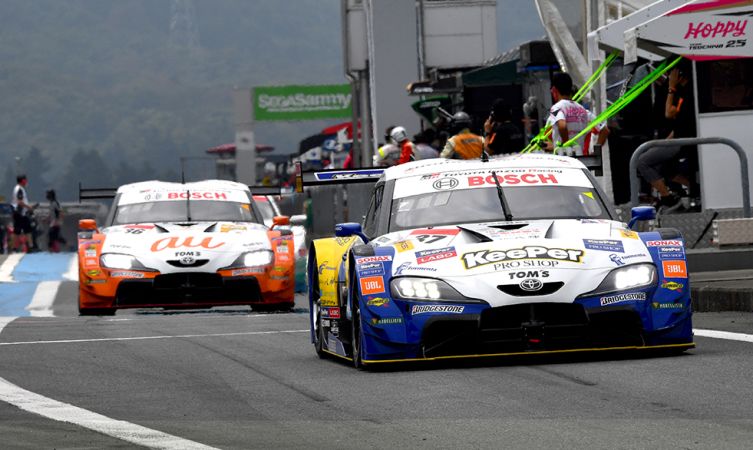 Capitalising on a spin-off after the routine pit stop, the #36 car progressed up to second and continued nibbling away at the lead car’s advantage. By the end of the race, the 20-second gap had been reduced to 16 seconds at the chequered flag. This meant the #36 GR Supra finished in second place for the second time in a row – a result that moved Sekiguchi and Fenestraz to the top of the drivers’ standings and the Toyota Gazoo Racing-sponsored au TOM’S outfit to the top of the team standings.

Although held without spectators, the highly anticipated start of the 2020 season did not disappoint. The weather proved ideal as the #37 KeePer TOM’S GR Supra started from pole position and former champion Nick Cassidy was largely unchallenged by pursuers. However, starting lap enthusiasm led to an accident within the chasing pack and stopped racing until lap six.

After fighting off an attack around the TRG Corner on the restart, Cassidy extended his lead to nine seconds by lap 20. A routine pit stop on lap 31 allowed team-mate Ryo Hirakawa to jump on board and resume the race, returning in third place. Their swift changeover meant that as soon the two lead cars pitted, the #37 GR Supra resumed its lead with an impressive 18.8-second advantage. However, that was immediately erased following a second appearance of the Safety Car, which bunched up the pack.

When the race restarted again on lap 43, there was just one second between #37 and the chasing #36 GR Supra. But by lap 50 this gap had been extended to five seconds, and from this point on, Hirakawa kept the field at a comfortable distance. Meanwhile, a bold move by the #39 car on lap 63 meant that GR Supra models secured all of the top five places during the closing stages of the 66-lap race. 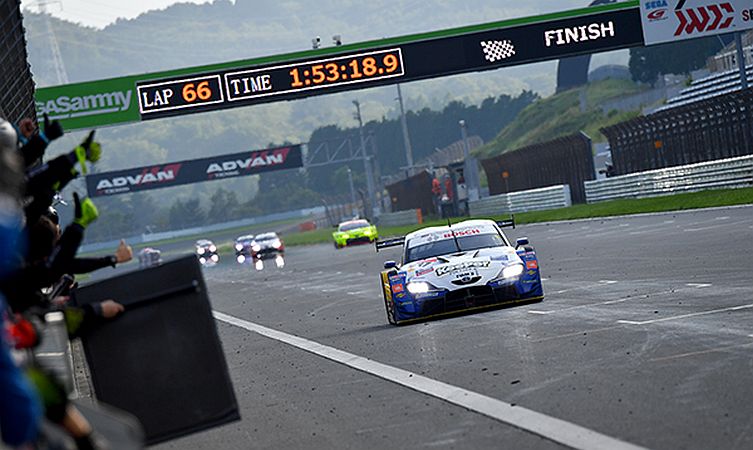 Learn more: Who is the fastest GR Supra driver?