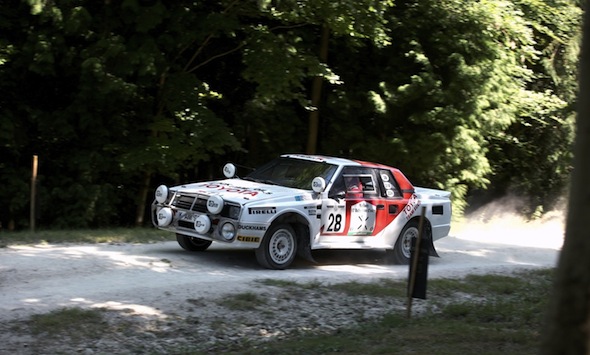 Popularly regarded as Sweden’s greatest rally driver, Björn Waldegård’s career in the World Rally Championship spans an incredible 19 years from 1973 to 1992. During that time he amassed 16 victories, including four wins in the gruelling Safari Rally, and 35 podium finishes in a grand total of 95 starts.

Björn joined Toyota in 1981 and was soon given the opportunity to race the powerful new Group B Toyota Celica Twin Cam Turbo, which he kindly took us round the Forest Rally Stage in at Goodwood.

His last race for the manufacturer came in 1990 behind the wheel of the mighty Group A Toyota Celica GT-Four (ST165 model). It turned out to be his most memorable victory for Toyota, cementing his position as the oldest driver to win a World Rally Championship event – a record he retains to this day.

Toyota Blog: Thank you for taking the time to talk to us, Björn. As somebody who was able to experience Toyota’s transition from Group B to Group A, how did you find the progression from rear-wheel drive to four-wheel drive?

TB:  In the mid-Eighties you switched co-driver from a fellow Swede you’d worked with for many years to an Englishman. How was your grasp of English at the time, and did this change slow you down at all?

BW: We had some difficulties in the very first rally in Uman. It took some time to get used to each other, but to switch from Swedish-language to English-language pacenotes was never a problem.

TB: Why do you feel that the Safari Rally is regarded as the most grueling of WRC events?

BW: It’s a completely different style of rally, long distance, long stages, its difficult to explain but it was just so different from a European rally because of the terrain in Africa. The Safari rally was tough, and you had to be very well prepared to win it – Toyota was, we won it three times.

TB: What does it mean to you to be back behind the wheel of the Celica Twin Cam Turbo?

BW: The Celica Twin Cam Turbo is one of my favourite cars, it’s very nice to come back to because it’s an enormously quick car with 400hp. The car is good fun to drive and there’s a lot of wheel spin.

TB: Do you have any particularly fond memories of the car that you can share with us?

BW: I won with the car in the Ivory Coast in 1986, and I won with it again in the East Africa Safari Rally. It has been very successful.

TB: Thank you for your time, Björn. We hope you enjoy the rest of the show.

Read our interviews with the other Toyota racing drivers at Goodwood here.