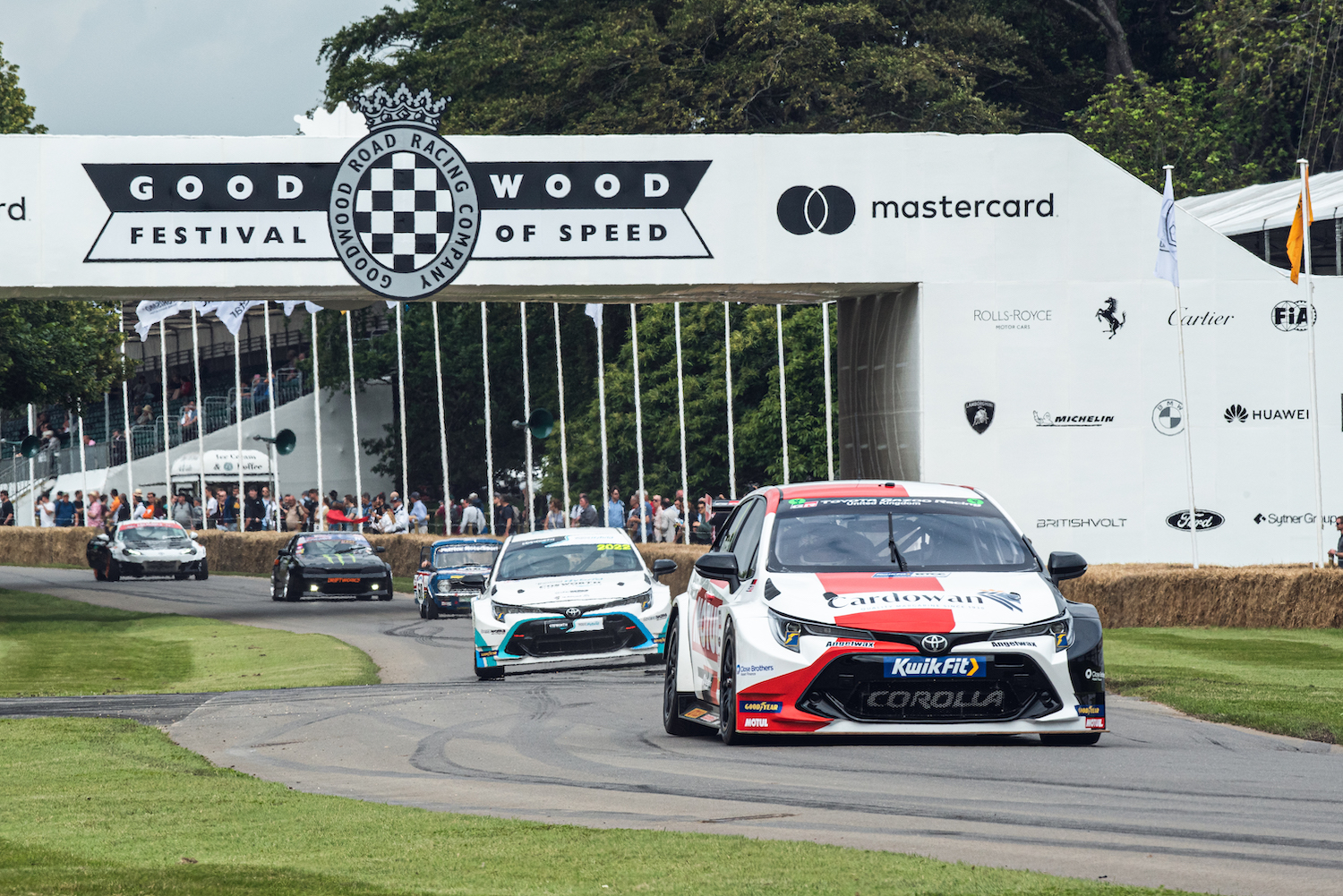 With so many exciting Goodwood cars on display, such as our all-new GR 86, you might be forgiven for not noticing one of the most important cars of the event. This is no new livery for the rest of the season, but instead a brand-new hybrid British Touring Car Championship racer in the current Toyota Corolla bodyshell.

In much the same way as a Toyota Avensis was used as the basis for the development of the Next-Generation Touring Car back in 2010, the technology underneath the Corolla will become the powertrain of the next generation of BTCC racers starting from 2022.

Although the car has a Corolla body, underneath it has a standardised, universal powertrain which will be used by competitors next season, regardless of which make and model of car they enter. The BTCC Hybrid is testing behind close doors throughout 2021, but Goodwood offered the public a rare opportunity to see it up close.

We spoke to test driver James Cole about the BTCC Hybrid between his Goodwood hill runs.

What was it like driving the BTCC Hybrid at Goodwood?

James Cole: “The BTCC Hybrid has been great fun to drive this weekend. Although this is not 100% the finished product it has still been a blast to take it up the hill at Goodwood. It’s especially good to be able to show off the hybrid car in front of the fans and the public as this is the first time the racer has been seen by them and it’s been a great opportunity to showcase the hybrid powertrain that all the BTCC racers will be using next season.”

What are the main differences between this and the current cars?

James Cole: “Visually, they will be practically identical and obviously under the skin all the cars will feature a battery pack as part of the hybrid system. I think the main difference from a driver perspective will be how the hybrid system functions. The driver will get an [as yet undetermined] amount of horsepower on a button, essentially a boost button, which will be used as an additional tool for race craft, overtaking and defending, so it’s going to add another layer of spice to the BTCC which hasn’t been seen before. Plus it will be the first national championship in Britain to introduce hybrids, so for British Touring Cars and Toyota to be at the forefront of that is exciting.”

Do you think drivers will quickly adapt to the new hybrid powertrain?

James Cole: “In terms of driving, I think there shouldn’t be too much to adapt or to learn, but in terms of racing strategy and planning, it opens up whole new avenues for the drivers. Drivers will have to think about deployment of the hybrid system, how to use it and when and crucially how to recharge it on top of all the other things BTCC drivers constantly think about during the race.”

Some fans might worry about a lack of noise, would you agree?

James Cole: “If they have heard the BTCC Hybrid over the weekend then they will know that sound won’t be compromised in any way and actually has a bit more of a growl than the 2021 BTCC racers. It definitely won’t be on the quiet side when they go racing next year.”

Other Goodwood cars of note

Alongside next season’s BTCC Hybrid, current Toyota Gazoo Racing UK stars Rory Butcher and Sam Smelt had their Goodwood debut, sharing one of the teams current BTCC Corollas and participating in the shootout to try to set the fastest time up the hill. We caught up with them both.

How was your first experience of Goodwood?

Rory Butcher: “Goodwood has really lived up to its reputation and has been an incredible event and I feel really proud to be here representing Speedworks and Toyota. I’m so pleased that the fans could be here and it’s great to have that electric atmosphere back at a motor racing event. In terms of the shootout challenge, I’ve just been completely wowed by it. Driving up the narrow road with the hay bales skimming the wing mirrors whilst doing over 100mph was quite an experience and certainly focused the mind.”

Sam Smelt: “Yeah it’s been fun and great this weekend. I wasn’t fully sure what to expect but I’d seen it on the TV over the years and knew just how big of an event it was. I’m grateful that the weather has held off a bit and that people were able to come and enjoy the show. I hadn’t quite realised just how demanding and tight the hillclimb route would be and was a bit of an eye-opener in the Corolla on the first drive. It was a great time and I’d love to come back next year.”

The drivers were speaking to Jake Weaver.