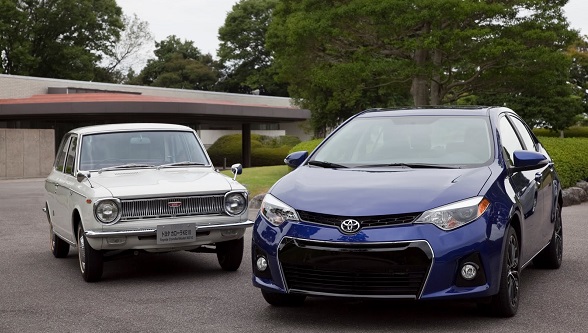 Lifetime global sales of the Toyota Corolla surpassed 40 million last month. Over the course of 47 years and 11 generations, Corolla’s winning blend of superb reliability and advanced safety features have been key to its enduring appeal.

From its introduction in November 1966, Toyota had high expectations for the Corolla, billing it as ‘The most wanted car by the market — presented to the world by bringing together the essence of Toyota’s technology‘. Annual production at Toyota’s state-of-the-art Takaoka Factory in Japan at the time was approximately 240,000 vehicles, and exports began immediately to secure  Corolla’s global success.

The first generation Corolla was something of a trailblazer in terms of vehicle safety and technology, being among the first models to feature rear reversing lights as standard across the range. It also boasted a floor-mounted gear lever; uncommon at the time, it ensured a sporty driving experience.

The British-built Auris and Auris Touring Sports are part of the Corolla family, too, as they carry the Corolla badge in some overseas markets. In fact Corolla models are sold in more than 150 countries. Production of the car is also an international affair: 125 new Corolla leave production lines in North America, Brazil, Canada, China, India, Japan, Pakistan, South Africa, Taiwan, Thailand, Turkey, Vietnam and Venezuela every hour. The number of Corolla  produced globally each year has grown steadily to 1.1 million.

Commenting on the sales milestone, Toyota US’s vice president of marketing Jack Hollis said: “As we celebrate this 40 millionth milestone, we are grateful to all those who have owned and loved their Corollas for the past 47 years and proud of the generations of Corolla Chief Engineers for their enduring vision.”

To find out more about the history of the first generation Corolla, read this post. Information on the second and third generations can be found in our features section.