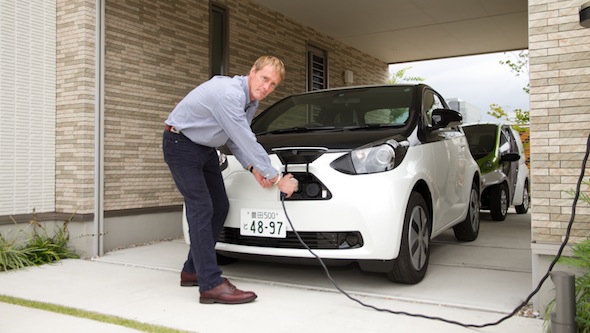 It’s three o’clock on a wet and sultry October afternoon in Toyota City just outside Nagora in Japan. These are not the best conditions for generating solar power, but Toyota’s house is just about holding its own against the light and scant air conditioning requirements of a host of foreign journalists.

A roof full of solar panels is generating a sluggish 0.7kWh, not good enough to charge the plug-in hybrid car charging up outside in the drive, but the Home Energy Management (HEMS) system isn’t designed to amp up this three-bed eco house any more than it already is, just to make the best use of what’s available.

It might even chose to drain the car’s battery to keep the lights on, preferring instead to use mains electricity to charge the car and the house’s battery in the middle of the night when demand is lower, watts are cheaper and the environmental impact is lessened. Or maybe the weather forecast says it will cheer up tomorrow, in which case, perhaps we’ll let the sun have a crack at charging the batteries first.

We already knew Toyota built houses, the successful home building part of the business was hived off as a separate subsidiary part of the company a couple of years ago and it builds about 15,000 homes a year, but these HEMS-equipped houses are the state of the art.

On sale at about €400,000 not including the house battery, these houses are a rich person’s pad, especially in Japan where building land is at a monster premium, but Toyota has installed about 67 such buildings in two locations in its Ecoful Town, an ambitious and very joined up environmental test bed in Toyota City.

The HEMS houses are part of a much larger study on environmental and efficient mobility, known as the low carbon society field test system, which includes (as well as the wired up houses) about 20 hydrogen filling stations to feed the thirst of a fleet of fuel-cell cars that will go on sale next year as well as some 21 charging stations and hire points for squadrons of tiny one and two seat electric vehicles, bikes and scooters in a system similar to the Autolib’ electric-car sharing system in Paris with vehicles available to hire by the hour, or minute.

One of the most exciting of those vehicles is the i-ROAD concept revealed at the Geneva Show this March and you can read our impressions of that car elsewhere. But the majority of the 100 electric runabouts will be of the COMS vehicle, a more pedestrian, non-tilting 380kg four wheeler, powered with a conventional lead-acid battery pack and capable of a 34-mile (55km) range and top speed of 37mph (60km/h) and requiring six hours to fully charge from exhausted.

You book via a computer or smart phone, pay on line with a credit card and hire costs are £1.30 for the first 10 minutes and 13 pence a minute after that with a 0.0065p per minute loading time. Typical journeys are about eight kilometres and half an hour, so that’ll be about £4. Not everyone hires these monoposto runabouts, however, and Toyota expects to sell about 3,000 a year in Japan at prices ranging from ¥700,000 (£4,515) to ¥1 million (£6,450) and the Japanese subsidiary of the 7-eleven stores has recently committed to buy 13,000 COMS vehicles over the next few years.

All good news for the sales figures, but what’s going on here is the mining of the data. Via a complex computer programme known as the Energy Date Management System (EDMS) the city fathers of Toyota City aim to link up most of the 422,000 population in the 918km² area. EDMS garners information on weather, temperature, traffic conditions and peak flows and provides prediction, advice to the population, transport companies (so more or bigger buses can be deployed in demand spikes for example) as well as directing systems and people towards low-priced off-peak electricity supply.

Consumers get positive eco points (as sort of eco Green Shield Stamps), which can be used to buy eco products. Positive benefits for the population include transportation advice across a wide variety of modes, including trains, buses, roads and the availability of electric vehicles and lower power bills (Toyota says that early results indicate that EDMS can save a further 20 per cent over the already green lives of the Toyota City inhabitants).

There is a cost in terms of the Orwellian surveillance of the population, but Toyota says it is managing this carefully, with data anonymisation. It also claims that attitudes towards sharing of energy-conservation data like this have become more positive after the stricken Fukushima nuclear power station disaster.

The advantages for Toyota are an invaluable source of real time data to help develop a new range of electric vehicles. We’ll be providing our own source next year, when 70 i-Road and COMS vehicles go on test in Grenoble, France next year for a three-year study on how we Europeans will live with the electric car.