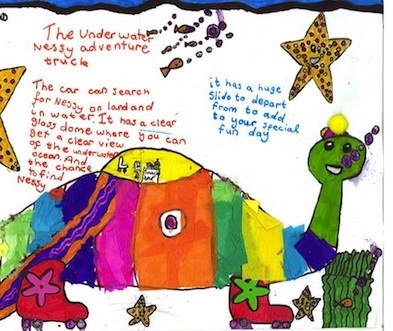 Talented Charlie Louise Sutherland is on her way to Japan as the first UK participant ever to reach the final of the Toyota Dream Car Art Competition.

Charlie (now 10), from Helensburgh, is making the trip thanks to her colourful creation, The Underwater Nessie Adventure Truck, being judged one of the best among the worldwide entries in the under-10 age group. She will be traveling with her parents to take part in the competition’s international final in Tokyo, at the end of August.

Established in 2010, Toyota’s Dream Car competition encourages children to use their imagination to create their own vision of the car of the future. Youngsters from 70 different countries take part, competing in local rounds before the judges select the most imaginative and creative to progress to the final.  This year the competition received more than 590,000 entries worldwide.

Charlie’s artwork depicts a car designed to search for Nessie – the elusive Loch Ness Monster – giving a clear view of the Scottish wildlife underwater in a safe environment.  Her work was chosen from the nine winners in three different age groups which reached the UK final in February at Toyota GB’s Surrey headquarters.

With a new passport and bags packed ready to go Charlie said: ”I am very excited to go on the plane and experience Japan.”

The four day day trip will allow Charlie time for sight seeing in Nagoya and Tokyo, a trip to the Ghibli Museum featuring anime artwork, as well as attending the ceremony which takes place at Toyota’s Megaweb showroom in Tokyo.

Find out more about the 2013 Dream Car Art Competition here.

If you’re looking to show off your artistic skills, or want an activity to entertain your children this summer holiday, take a look at our colouring competition.