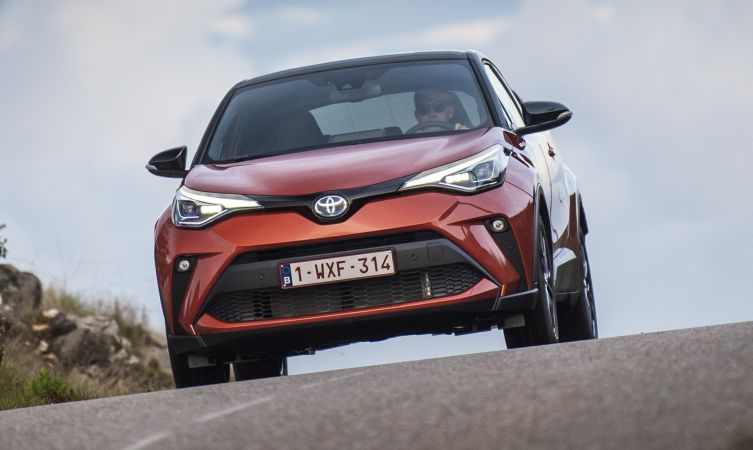 The first road-test reviews of the newly revised 2020 Toyota C-HR have been published, following the recent European launch in Portugal.

A range of influential UK motoring publications were invited to the event. What were their impressions of the revised C-HR range and our new strategy of offering customers a choice of hybrid powertrains? Below is a selection of excerpts from some of the online reviews. To read the full reports from each outlet, click the emboldened links.

“Toyota expects the 2.0-litre model will account for… 25% of total C-HR sales and should satisfy the desire for a peppier, slightly swifter variant that it says its customers have expressed. This sounds like a fair shout. While the new 2.0-litre is by no means the quickest car on the planet, its additional poke is welcome. There’s enough in the way of urgency behind the way it accelerates to make its 8.2sec official 0-62mph time seem entirely credible.

“It handles sensibly, too. The steering is light, reasonably quick and accurate. The car takes on corners in a manner that balances an appealing level of responsiveness with laidback nonchalance; it changes directions swiftly, grips assertively and doesn’t feel too roly-poly.”

The level of clever tech the 2.0-litre utilises could take up the entire space of this review

“Even a few years on from its debut, the C-HR manages to cut a distinctive figure, so there wasn’t much need to fiddle with the styling.

“The range kicks off with the existing 1.8-litre hybrid… [where] the electrical system now draws from a lithium-ion battery that’s smaller, lighter and more powerful than the previous nickel-metal hydride item. And now there’s a new range-topping hybrid to choose from. The level of clever tech the 2.0-litre utilises could take up the entire space of this review, so all we’ll say is that the various innovations conspire to make [it] the most thermally efficient combustion engine on the market, a fifth lighter than Toyota’s previous 2.0-litre, and 50% more powerful than the 1.8, yet only 10% less fuel efficient.”

“On the move, the Toyota C-HR impresses. A fine balance has been struck between comfort and handling, meaning that road surface imperfections are ironed out nicely, but the car still feels solid and capable through the corners. The steering has been tweaked on the new 2.0-litre model, and it maintains a crisp feel that gives… an air of zing to the driving experience.”

It’s all very fitting for a fresh, undoubtedly greener, decade to come

“With a cleaner shape, the car radiates dynamism. LED headlights with integrated indicators and a more open grille give the up-to-the-minute C-HR a seductive ‘face’. Its rear light clusters also feature LED technology and there’s now a sleek spoiler spanning the width of the vehicle. Yes, it’s sexy.

“The petrol-electric system gives the car a balance of efficiency and clout unequalled among mass-production engines of today. It’s all very fitting for a fresh, undoubtedly greener, decade to come.”

“All-in, it does look a little less fussy… appearing smarter and a bit more appealing, while retaining the majority of its original wackiness. Inside, new materials adorn the top of the dash with that vivid blue streak across it the reserve of higher-spec Dynamic models. But there are plenty of curves, textures and surfaces to keep things interesting. The biggest news inside is an updated media system that… now comes with Apple CarPlay and Android Auto.

“Refinement is rather impressive, and the combination of hybrid engine/CVT transmission is one of the best yet in terms of noise and responsiveness. This version builds speed with pleasing pace that doesn’t leave you hanging.”

“What we [liked] before was the steering and suspension setup in the C-HR. Even so, Toyota has improved on that once again. There’s now an enhanced power steering system. The resulting feel is light but direct – you shouldn’t find yourself having to play with the wheel all that often.

“The ride is comfortable but not wallowy. You’ll corner flat and although you’ll notice bumps in the road, they never seem to shudder through the cabin as in some other crossovers, even with the larger 18-inch wheels fitted.”

“The C-HR feels… lively in urban driving, thanks to its electric motor giving you a boost when setting off. Indeed the C-HR positively zips away from the lights. Refinement, on the other hand, is impressive at all speeds. The C-HR lets you run on near-silent electric power much of the time in stop-start traffic, and while it needs to use the engine when cruising at the national limit, you can’t really hear it.

“Handling is another plus point. [It] handles a set of quick direction changes better than most other family SUVs, thanks to direct and accurate steering and minimal body lean.”

Inspired by our round-up of 2020 Toyota C-HR reviews? Find out more here.