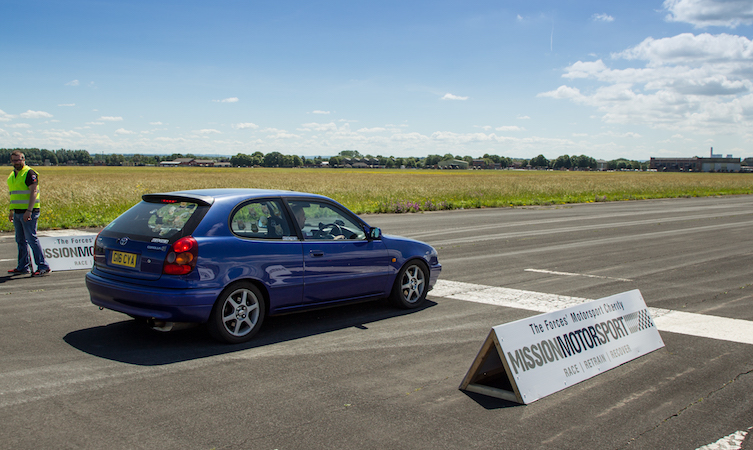 While the European-spec eighth-generation Toyota Corolla may have been the base for the car that won the World Rally Championship in 1999, the standard production car models were much more sedate affairs, more commonly seen pottering down the road to the local shops than tearing up the tarmac. Not exactly the basis for a modified Corolla, you might think.

Having said that, over the years a few people have seen the same potential that made Toyota Team Europe choose these unassuming hatchbacks as the basis for their world-beating rally cars. This very ordinary-looking blue 1998 Corolla, complete with cat stickers on the windows and a National Trust badge on the rear, is a great example of this.

While at face value this car looks as far from a performance model as you can possibly get, at a recent ‘Launch Control’ event held by armed forces charity Mission Motorsport, this 1998 modified Corolla achieved a higher speed over the standing half-mile than most of the £100,000-plus supercars that attended. At 150mph, the speed it achieved is more than 40mph faster than the standard cars’ top speed, but in around a quarter of the distance!

It’s no surprise, then, to learn that this Toyota Corolla has undergone some modifications. Under the bonnet the original 1.3-litre engine has been replaced with a 2.0-litre turbocharged 3S-GTE engine – which, incidentally, is the same engine the aforementioned Corolla WRC powerplant was based on. While the internals are exactly how they left the Toyota factory, the engine features many external upgrades, including a larger turbocharger, Wolf engine management and a secondary fuel set-up that injects pure methanol when the need arises.

Although power figures for the car haven’t been confirmed, to achieve 150mph in just half a mile, the car is estimated to be making upwards of 450bhp – more than five times this car’s factory power figure.

The strong Toyota build quality has been both a blessing and a curse when it comes to extracting high performance. On one hand the modified Corolla is heavier than expected for its size and age, but on the other, the great build quality means the car feels strong and stable even at 150mph; something you’d not normally expect of a small front-wheel-drive hatchback.

As you might imagine from a front-wheel-drive car with such power levels, wheelspin is a serious issue, with the car only truly getting full traction in fourth gear, making its ability to hit 150mph in such a short distance even more impressive.

Buoyed by the fantastic performance on the first attempt in this modified Corolla, and now wanting more, a new engine has been sourced for the car. The new unit will be another 3S-GTE, but this time with heavily strengthened internals, and these, combined with many other planned changes, should boost power beyond the 600bhp mark. To help get the power to the ground, a number of mechanical and electronic changes are also in the pipeline, which should massively increase traction.

One thing that won’t be changing is the car’s appearance. Part of the fun of the car is the fact it looks so ordinary, adding to the shock value when the performance times come in…

By Steve Neophytou, owner of the 150mph modified Corolla.