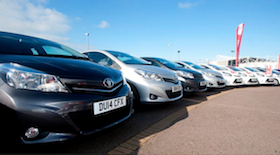 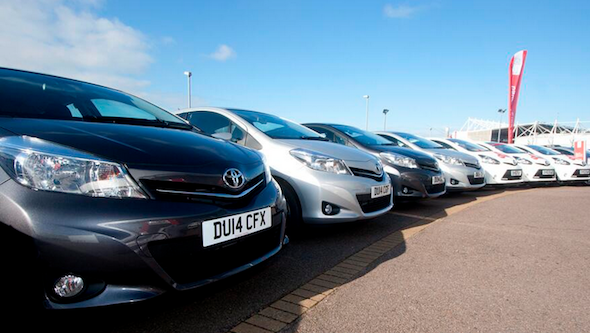 The month of March kicks off a new registration number plate and to celebrate we’ve put together 14 things you need to about the 14 plate.

The latest plate is known as the ’14’ plate due to the two numbers in it, called the ‘age identifier’. They signify that a car has been registered between March and August 2014.

What better time to buy a new Toyota than when it has a brand new number plate? Take a look at the best Toyota deals on 14-plate cars.

3) Why they’re white at the front, yellow at the rear

White lights on the rear of a car are meant only to show that it’s moving backwards – hence white reversing lights. White rear plates could confuse other drivers, so they’re yellow.

The font of the number plate is called Charles Wright 2001, with each character 79mm high in a standard car plate.

5) It’s not the same in Northern Ireland

Car buyers were not superstitious last year as the 13 plate outsold the previous nine registration plates.

The Queen won’t be getting a 14-plate car – cars used by the reigning monarch on official business do not carry number plates.

You could say the number plate is 110 years old this year – the Motor Car Act came into force in 1904, which required most cars on the road to be registered and carry a number plate.

Earl Russell was the first owner of ‘A 1’. The story goes that he waited outside the issuing office all night, arriving mere minutes before a rival for the coveted plate.

The most expensive number plate ever sold in the UK is the singular ‘F 1’. It attracted the highest price paid for a UK number plate in 2008 when Afzal Kahn, the owner of car customisation house Kahn Design bid £440,625 at auction.

Cars made before January 1st 1973 are allowed to display ‘traditional’ number plates, which have white or silver characters on a black background.

There may be no cars on Antarctica, but there are plenty of tractors and trucks, so the continent has it’s own registration system. Vehicles are simply given a number – a VW Beetle was given number ‘1’ in 1963.

New registration numbers have been released twice-yearly since 1999, in order to smooth out the ‘bulge’ in activity in the car market each August. New registrations are now released in March and September.

Special forces vehicles do not use the reflective background seen on normal number plates. Instead they use matte-finished plates as reflections could be used as targets for laser-guided weapons when in combat.