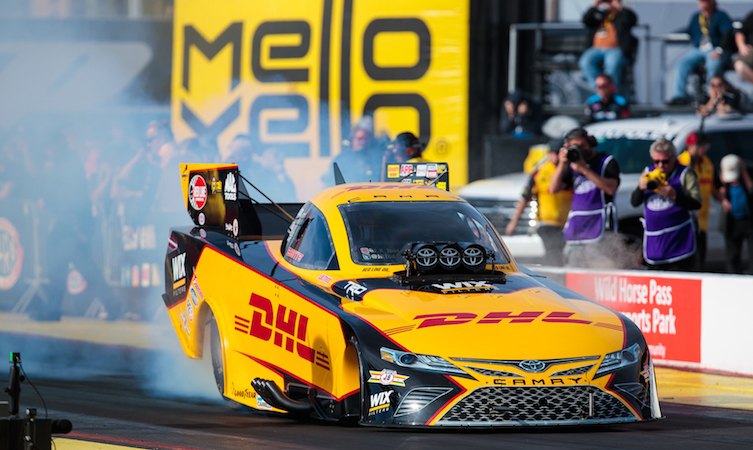 National Hot Rod Association (NHRA) drag racing in the US features duelling, nitromethane-fuelled cars that will accelerate to 100mph in less than a second and blast through the finish line of the quarter-mile strip in under four seconds. The reigning NHRA Funny Car champion is J.R. Todd, driving a DHL-sponsored Toyota Camry drag car for the prominent Kalitta Motorsports team.

Not your average Camry

TRD designed the carbon-fibre bodyshell, which loosely resembles a Camry. It works with the Kalitta team on wind-tunnel testing and advises on the chassis build. TRD engineers also attend the races, helping Todd’s team to get the most from the 11,000bhp Camry.

You read that correctly: Funny Car engines produce between 10,000 and 11,000bhp. They are highly specialised, 500 cubic-inch (8.2-litre), supercharged and fuel-injected V8s that are not specific to the competing manufacturers. By comparison, the new Camry road car produces a more manageable 215bhp from its hybrid powertrain in UK specification.

A racer since childhood

J.R. Todd started junior drag racing at the age of ten. He’s a relative newcomer to Funny Cars, however, and won the NHRA title in only his second season in the category.

“Winning the championship was a lifelong goal,” says Todd. “As a kid I watched guys like [fellow driver] John Force, who’s won 16 championships, so it’s surreal to be racing him.

“The championship earns the respect of your peers and it was the only way to pay back Connie Kalitta, our team owner, who took a chance on hiring me to drive for him.

“TRD has been a huge help to us. We’ve had the same style of Toyota Camry for a number of seasons, so to still be winning races and championships goes to show how good it is compared with the other manufacturers, who have newer body styles.”

Todd says that no two runs in a Funny Car are the same, but they all begin by strapping in tight: the custom seat and nine-point harness stop him moving around when the acceleration spikes to 5.5g off the starting line. With the cars’ performance closely matched, it’s all-important to react quicker than your competitor when the lights go green.

“You must then keep the car on the rubbered-in ‘groove’ down the middle of the lane,” says Todd. “When you’re making the amount of power that we are, but you don’t have a lot of downforce, the car is spinning the tires and wants to drive any which way but straight.”

So much downforce comes from the up-slanted exhaust pipes that if one of the eight cylinders stops firing, Todd’s hands might turn the steering wheel from the standard 10-and-2 position to 12-and-6, to compensate for the resulting push across the track.

Once past the finish line, Todd pulls parachutes to get the Camry drag car stopped from up to 330mph.

The defending champion recently scored his first win of the 2019 season, in Las Vegas.

“They’re intimidating cars, but they’re a lot of fun,” sums up Todd. “You just have to be ready for anything to happen.”