Skip to content
Home Cars & More New Hilux Trossachs Search and Rescue: how Hilux helps to save lives in Scotland 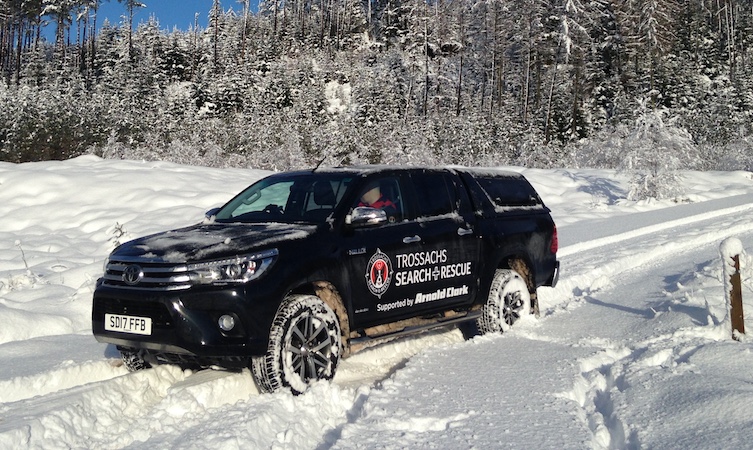 The Toyota Hilux’s design brief almost certainly didn’t include ‘life-saving multi-tool’ among its specifications, but the rugged four-wheel-drive pick-up’s broad range of abilities and world-renowned reliability mean that it’s regularly called upon to fulfil just such a remit.

If you live in one of the UK’s more densely populated areas you might take the emergency services for granted. In some parts of the country, however, their good work is often augmented by any one of a number of voluntary organisations delivering specialist support in difficult conditions or terrain. In many cases those volunteers rely on the Hilux’s cast-iron reputation in order to save lives and keep local communities safe.

A prime example is Trossachs Search and Rescue, a registered Scottish charity based in and around the villages of Balfron and Aberfoyle to the west of Stirling, from where they deliver a range of services in support of both the emergency services and their local community. 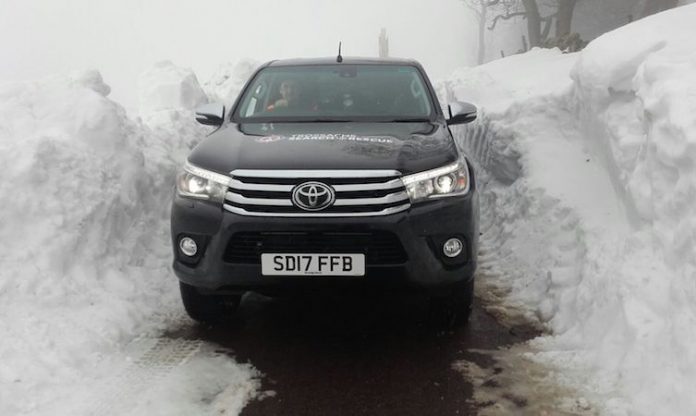 Trossachs SAR provide lowland rural, urban and coastal search and rescue along with first-response ambulance service support, flood relief and an incredible array of community services that have proved to be vital for a diffuse rural population spread over a wide geographical area.

As the name suggests, searching for and rescuing lost, missing or injured people is a key part of what Trossachs SAR do. But their role is much, much broader than that, and the two Toyota Hiluxes at their disposal play a crucial role.

“We’ve got two Hiluxes, the silver 15-plate one and the later 17-plate,” says Stuart Ballantyne, Trossachs SAR secretary and call-out organiser. “They’re very capable no matter what the weather is and they’re both in use every day.” 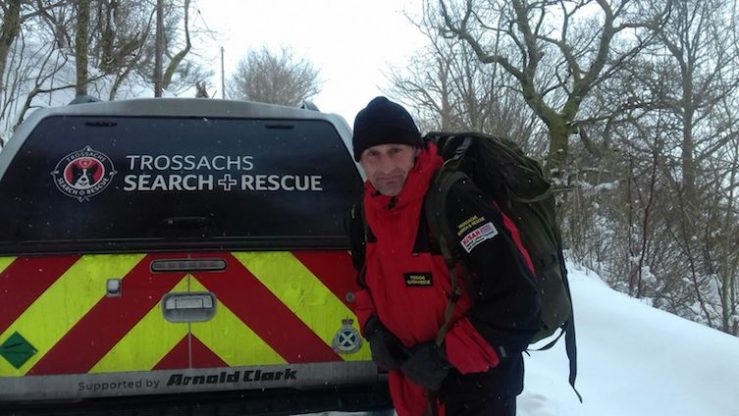 The pair of pick-ups have been supplied by Toyota dealer Arnold Clark based in nearby Stirling, but the dealership’s connection with the service the team provide is even closer to home than that.

“Arnold Clark is a local family and they’ve seen what we’re doing in the community,” says Stuart. “They first sponsored us back in 2007 because of the work we do locally, then they approached us again in 2015, which is when we got the silver Hilux. We were going to give the silver one back when it was three years old, but luckily someone donated the money for us to buy it outright, then Arnold Clark gave us the black one. That’s now coming up for its first MOT, so they’re talking about changing it again.” 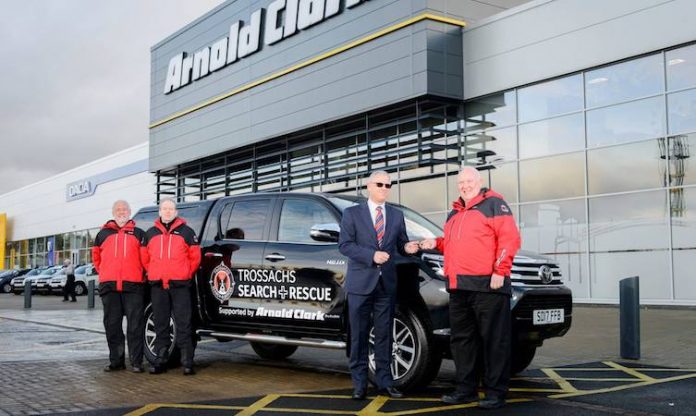 Trossachs Search and Rescue have been in operation since 1988. The organisation is a registered charity currently comprised of 43 volunteers – “a 50/50 mix of men and women,” notes Stuart – and with no paid staff. Ostensibly the team cover an area of around 500 square miles or so, including the expansive Loch Lomond and the Trossachs National Park, but they – and the Hiluxes – have been called into service across Scotland, including the Outer Hebrides, and anywhere else in the UK if required, not least thanks to one particular piece of  search and rescue kit, this time of the four-legged, rather than four-wheel-drive, variety.

“Our primary search tool are our search dogs,” says Stuart. “The Hiluxes are great for those because each one can carry a cage housing two dogs, along with four people and all our rescue kit.

“The unique thing is that our dogs are trained as Urban Search and Rescue dogs, so they can search collapsed buildings. When the Stockline factory collapsed [in 2004] it was our dogs involved, and when the helicopter crashed into the Clutha pub in Glasgow, again our dogs were involved with that.”

Closer to their home base, Trossachs Search and Rescue provide mobile emergency care service – or MECS – cover, acting as first responders on behalf of the local council for the Scottish Ambulance Service, which can be thinly stretched across a widespread rural community. 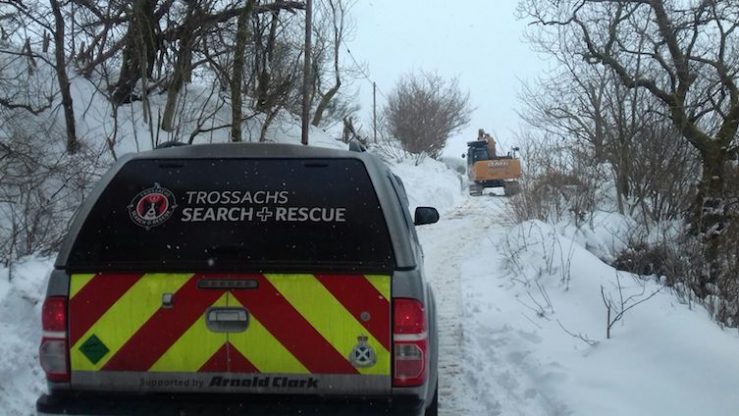 “We deal with people in cardiac arrest, with breathing difficulties, unconsciousness and old folk who fall at home,” says Stuart. “We end up in rescues as well, so that could be a mountain biker who’s fallen on a remote track somewhere.”

As we’re talking it is quite literally the calm before the storm: the UK is set to be battered by storm Ciara within 48 hours, but Stuart takes it all in his stride. “We’ll put people on standby,” he says. “We have a lot of bad weather. We had incredible snow here during the Beast From the East and the Hiluxes were a godsend, delivering emergency prescription medicines and getting people to hospital for cancer treatment or kidney dialysis. The ambulances couldn’t cope but the Hiluxes were amazing, they never, ever got stuck.” 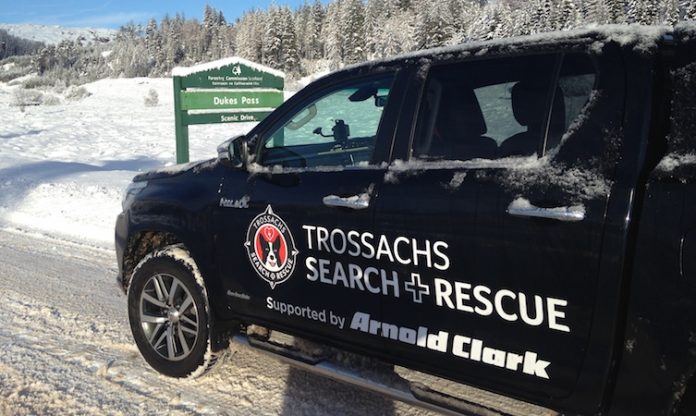 All of this legwork means the Hiluxes are in use day and night, seven days a week. The silver 2015 Hilux has so far racked up 64,000 miles in the line of duty, while the later 2017 example has covered in excess of 38,000 miles – and counting.

Every night, from 5pm until 8am the next day, two team members and at least one Hilux are on call as first responders, then during the day the vehicles are in use offering a range of proactive accident prevention programmes across the community. These include water safety initiatives, maintaining a local network of 160 public access defibrillators – “they have saved 23 lives over the past seven years” – and running heart-start classes in partnership with the British Heart Foundation. 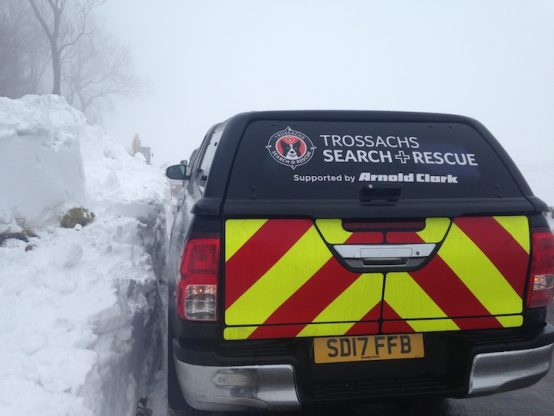 “We teach people how to deal with someone in cardiac arrest and use the defibrillator,” explains Stuart. “Last year we delivered 126 classes and trained 2310 people, so that’s making a big difference locally. The Hiluxes really are contributing to saving lives in this rural community.”

To find out more about the Toyota Hilux, click here