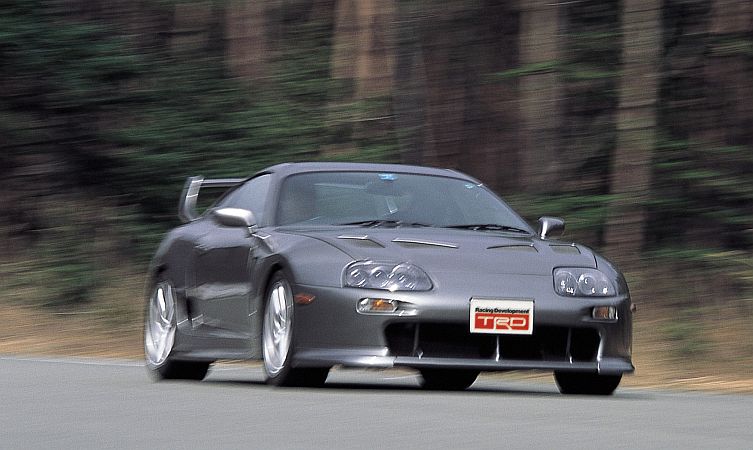 After Toyota Racing Development (TRD) was officially established in 1976 as the company’s in-house tuner, its engineers spent a significant proportion of their time preparing production cars for motorsport. But 18 years later, evidence was provided that TRD had inversed this procedure with the production of the TRD 3000GT, a road model directly inspired by a competition car.

A few months prior to the fourth-generation Supra’s arrival as a works entry in the inaugural Japanese Grand Touring Championship (JGTC) in 1994, TRD displayed a sensational road-legal version of the race car at the annual Tokyo Auto Salon aftermarket tuning show. Dubbed the TRD 3000GT, it wore the same widened and wind tunnel-honed bodywork as the new GT500 class super-touring Supra.

While every component of the TRD conversion became available to order individually as a dealer-fit accessory, the ultimate and most exclusive incarnation was a factory-built model. Only 35 examples of these were ever produced, each of which came with its own specially numbered VIN plate that officially re-classified the car as a TRD 3000GT rather than a Toyota Supra.

For TRD, this debut road project was more about improving performance by optimising the vehicle’s dynamic ability, rather than increasing power. So although the conversion did include enhanced engine-breathing products and uprated suspension, the primary focus was on exchanging heavy original bodywork for aerodynamically superior components made from fibre-reinforced plastic.

At the front, the new TRD bumper played a vital role in slicing through the air wall in front of the vehicle. The relatively sharp front splitter sent some of the atmosphere under the car, where the flattened floor guided airflow backwards to generate downforce and maximise the effect of the rear diffuser.

Much of the rest was directed through the larger bumper intake, which swallowed twice as much volume as the original. It then used three dedicated ducts to efficiently channel air towards the radiator, turbo intercooler (offside) and optional oil cooler (nearside).

Interestingly, one of the most instantly recognisable styling elements of the TRD 3000GT – its four geometric bonnet vents – were carefully positioned to relieve negative air pressure from all that incoming air and simultaneously improve cooling within the engine bay. But in general circumstances on the road, their functionality was disabled by special panels attached to the underside that were designed to protect the under-bonnet components from water damage. However, these could be easily detached for summer blasts and track days.

Moving to the sides, the TRD 3000GT offered a supercar stance with 60mm (front) and 50mm (rear) added to the overall width through widened wing panels. This was in order for wider wheels to be fitted, which in turn improved the car’s lateral grip. Linking the two ends were squared-off skirts designed to prevent airflow travelling along the upper surface of the body from interfering with ground level airflow. It also improved the flow of air into the side ducts, if a differential oil cooler had been specified.

At the rear, there were two different high-level wing designs: Type-S and Type-R. Both offered a cross-section and blade design that generated a greater aerodynamic advantage than that on the standard Supra. But while the triple-leg design of the latter offered a fixed arrangement, the blade of the more popular Type-S (see image above) could be set at six different angles. Finally, the diffuser built into the bumper consolidated all the existing aerodynamic refinements to effectively produce the downforce of the entire vehicle.

One of the most eagerly anticipated GR Supra models displayed at the recent SEMA show was the GR Supra 3000GT concept. Fittingly, this project was dreamed-up by Toyota’s new, official customising and development department.

Aiming for the same dynamic appearance of a race car built for the road, the build was infused with many of the styling cues and functional aero components seen in the iconic TRD 3000GT – only ten examples of which were ever officially supplied to the entire American market back in 1994.

The distinctive bonnet vents and high-level rear wing were modelled after the original, while extra width was achieved by installing carefully crafted over-fenders.

The look is further enhanced with a full body wrap in a brushed silver vinyl that offers a visual nod to the original launch colour of the TRD 3000GT (see opening photo), albeit accented this time with satin gold flourishes. Staggered 19-inch alloys, Tein coilover suspension and a custom HKS exhaust system complete the external makeover.

At the final round of this year’s Super GT championship (successor to the previous JGTC series), Toyota unveiled its new GT500 competitor for the forthcoming season – the new GR Supra. We’re delighted to welcome Supra back to this top-level motorsport series and will publish further details about this car as soon as possible.

Although currently running a stealthy, unliveried appearance, we can nevertheless appreciate how TRD’s original formula for transforming a road car into a race car remains true today. Time will only tell if those same efforts will be inversed again in the form of a limited edition GT500-inspired race car for the road.