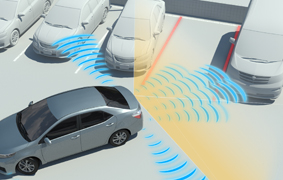 Imagine how much easier life would be if your car realised when you’re about to reverse into a high kerb and could intervene to prevent a costly scrape? Or if you could make your car transparent, so you have a complete view of your surroundings when edging back into a parking space? Toyota is ready to help with clever improvements to its parking support technology that it will be featuring on new models from next year.

Intelligent Clearance Sonar
Toyota’s Intelligent Clearance Sonar not only detects obstacles, it also helps prevent or mitigate collisions where the driver hits the accelerator by mistake – a familiar hazard when backing out of a parking space. Toyota has improved the system by adding extra sensors that can detect objects further away, increasing the breadth and depth of scanning.

It has also reworked the system’s control logic so that there is less risk of colliding with adjacent vehicles or obstacles, even when using the wrong pedal isn’t the issue, for example when driving slowly around a car park, or pulling out of a parking space.

Toyota’s Intelligent Park Assist system now uses ICS to prevent or reduce the consequences of collisions by deploying automated braking. It can also take the strain out of parking with a new multi-point turn support function that provides automatic steering control1 in tight spaces where the driver has to make multiple turns of the wheel.

IPA’s benefits also include A partially automated1 function to help drivers negotiate their way out of a parallel parking spot where there’s little room in front and behind the vehicle.

Panoramic View Monitor
Vehicles fitted with Toyota’s Panoramic View Monitor can already take advantage of an overhead view of their car, displayed on the navigation system’s screen. The view is being made even clearer with a new See-through View function. At the press of a button, the driver can flip between Moving View, which displays real-time video as if looking down on the vehicle, and See-through View, which gives a driver’s perspective of the car’s surroundings, as if the vehicle were transparent. Compared to Moving View, obstacles are shown larger, making them easier to spot and avoid.

Toyota’s improvements to its parking support technology are intended to make parking safer and reduce the high level of property damage accidents witnessed in car parks worldwide. This in turn supports its mission to help eliminate traffic fatalities and injuries. Toyota’s Integrated Safety Management Concept sets the direction for the development of both vehicles and safety technology. It covers all aspects of driving by integrating individual safety technologies and systems, rather than viewing them as units that function independently.