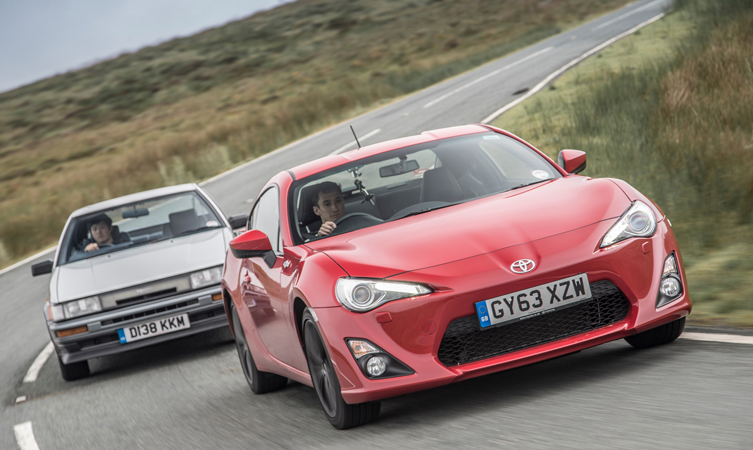 We took our rare, low mileage Toyota Corolla GT Coupé AE86 and a Toyota GT86 to Wales, to see how the two compare. So in the battle between AE86 vs GT86, which is better?

If there’s one car that really gets Toyota fans all revved-up, it’s the Corolla GT Coupé AE86. The car burst onto the British sports car scene in May 1985 and quickly won plaudits for its tuneful 1.6-litre 124bhp twin overhead cam engine and a rear-wheel drive layout that leant itself well to the sports of rallying and drifting.

The car pictured is from our heritage fleet, and has covered a mere 40,000 miles since new. Finished in silver over graphite, we acquired the car from Toyota blog writer Joe Clifford, who at the time was the editor of Banzai magazine.

Describing his time with the car, Joe said: “Other than servo assistance for the brakes, there is no other electrical or mechanical system to dilute the raw driving experience of the AE86 Corolla GT Coupe. In that respect it is by far the most visceral and exciting car I have ever owned. The engine’s hunger for revs and the addictive rasp of the exhaust note play to your emotions, while the ability to steer the car from either end makes you feel quite literally the centrepiece of its playful handling.”

Only when you drive the car, can you fully appreciate what a wolf in sheep’s clothing the AE86 is. Visually, the car isn’t particularly shouty, but the same can’t be said for the exhaust note, which, put simply, is loud – very loud. Driving through Welsh hamlets, the car’s distinctive and raspy note attracted a lot of attention – it really does sound like no other car. At 40mph, it’s easy to feel like you’re going a great deal faster because the engine is gloriously vocal – here is a car that urges you to rev it way beyond 4000 and even 5000rpm.

Also of note is the low-slung driving position. It means you can feel every bit of the road in a way that few modern cars can match, while the thin pillars provide excellent all-round visibility – who needs parking sensors anyway?

And what about that back-end? The truth is, unless you are goading the car sideways, the back-end remains forward-facing; this means the car is easy to drive and not the handful some might believe it to be, and that’s no bad thing.

When the GT86 was launched in 2012, it was billed as ‘Officially the real deal’. But this tagline wasn’t without ballast, as evidenced by the praise that has been bestowed upon the car in the time since. Autocar said of the car: “The GT86 has altered the sports car genre. It is the performance car made relevant again; it is the new supercar.” While Jeremy Clarkson gushed: “Everything about the GT86 is immediate – and brilliant. It will put a smile on the face of every motoring enthusiast in the world.”

So what’s the secret to the car’s brilliance? Firstly, the 2.0-litre 197bhp boxer engine is mounted low and as far back as possible, which optimises the GT86′s handling by keeping its centre of gravity low. Specially designed suspension has been tuned to deliver instant response to the driver’s inputs, making it nimble and beautifully balanced, with brilliant grip levels from its limited-slip differential without intrusive electronic driving aids. That said; luxuries such as cruise control and Toyota Touch & Go sat nav feature.

Unlike the AE86, the rack and pinion steering on GT86 is power-assisted, but it feels every bit as direct and almost as weighty, responding instantly to driver input. The main difference between the pair in terms of steering is the relative thicknesses of the wheels; GT86 has a thick-rimmed, small diameter steering wheel, whereas the AE86 has a large, thin wheel.

Floor the throttle and GT86 responds with a throaty but hushed roar. Its sound is plainly influenced by the AE86, but it settles down during motorway cruising. Both cars feature skinny tyres, which make cornering involving – stiff chassis’ mean that body lean isn’t unnerving, nor at the same time completely absent. Ultimately, the GT86 combines all of the best bits of its ancestor, but with a dash of creature comfort and up to 40mpg.

Hungry for more great AE86 vs GT86 content? Check out Paul Cowland’s comparison of the two cars in the film below: