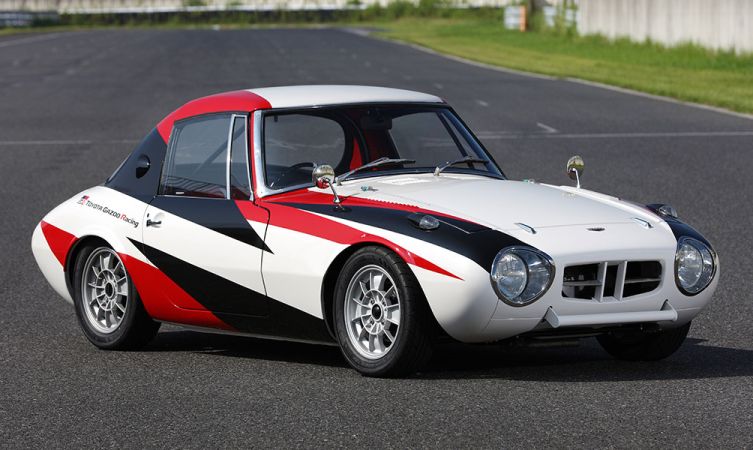 We have a hunch that this Toyota Sports 800 restoration could be Toyota’s oldest surviving racecar. Not only was the production model Toyota’s first commercial sports car, the ‘10007’ chassis number of this particular example makes it one of the first off the production line in 1965.

Thankfully, things have changed since the above image was taken. A special Toyota Gazoo Racing team set about this Sports 800 restoration, bringing the car to pristine condition and reimagining it in our current race livery.

Their lead was so great the race organisers suspected foul play

This car was one of four Sports 800 models entered in the inaugural Suzuka 500km endurance race in January 1966 – an event in which the tiny two-seater defied the odds to capture an emphatic one-two win against bigger, more powerful machines. In fact, we’re told that this was the #3 car that took second place in the hands of Mitsuo Tamura.

The secret of its success in motorsport was twofold: aerodynamics and kerb weight. Chief development engineer Tatsuo Hasegawa (the man also behind the first-generation Corolla) began his career as an aeronautical engineer and used his knowledge of atmospheric resistance to shape a body that was aerodynamically efficient across both vertical and horizontal planes. At the time, this level of wind tunnel testing was revolutionary within the automotive industry.

While all other competitors had to pit to refuel, the little Toyotas ran the entire distance without needing to stop

Its construction was also revolutionary. The Sports 800 was the first Japanese production car built with a strategic combination of steel and aluminium, which contributed to a kerb weight of just 580kg. As a result, the engine didn’t need to be particularly powerful to make the car the fastest machine in its class.

This less-is-more approach paid dividends in the 1966 Suzuka 500km, where the Sports 800s were untouchable from the second half of the race onwards. While all other competitors had to pit to refuel, the little Toyotas ran the entire distance without needing to stop. In fact, their advantage was so great the organisers suspected foul play and rushed to inspect the fuel tanks. Not only did they fully comply with the regulations but about 30% of the fuel load still remained! It was later calculated that the Sports 800s had achieved fuel economy of more than 25mpg at race speed.

Little has been revealed about how or where this Sports 800 was discovered, other than it was found in a garage in the severely decayed condition seen in the opening image. Importantly, however, its historical importance was recognised and the restoration project passed to specially selected team from Toyota Gazoo Racing, Toyota’s modern-day motorsport department.

Prior to Sports 800 restoration, examination of the vehicle showed that in preparing ‘10007’ for motorsport it had become a very different machine to the production car. Yet with no spare parts or design drawings to refer to, the exact race specification was something of a mystery.

Advice was therefore sought from owners’ clubs, which were able to supply some new old stock components, while engineers from a number of Toyota group companies were attracted to the project and volunteered to fabricate other parts from scratch.

More than half of the car’s body had to be rebuilt from sheet metal, while the traces of additional reinforcement put in place by the race engineers more than 50 years ago were carefully re-instituted. The race suspension was also rebuilt and retained, and the engine internals benefited from modern precision balancing techniques to improve high-rev refinement and durability.

Rescued from its dilapidated state by a team of skilful yet sympathetic engineers, this historically significant motorsport model has been reborn as the Sports 800 GR Concept. Now 53 years old, the little coupe is Toyota’s oldest new Gazoo Racing concept, following the GR Super Sports Concept unveiled at this year’s Tokyo Auto Salon and the GR Supra Racing Concept revealed at the recent Geneva International Motor Show.

What do you think of this Sports 800 restoration? Why not scroll down through our image collection and then lodge your comment in the reply box at the bottom of the page.