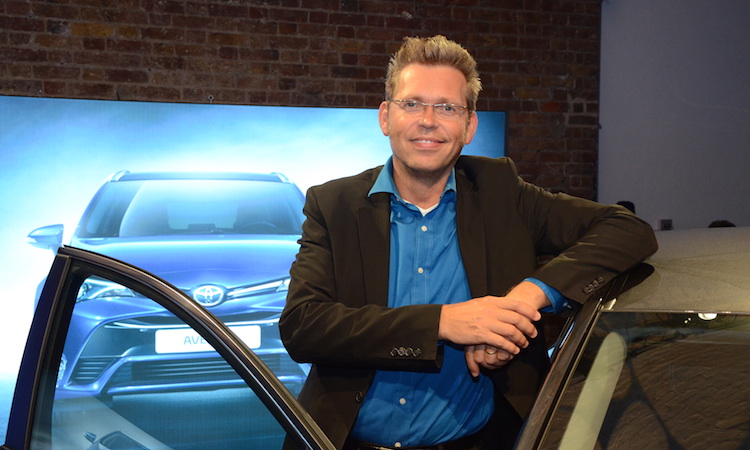 At a recent preview event for the upcoming new Toyota Auris and Toyota Avensis models, we caught up with one of the people behind one of the cars’ key new features, Toyota Safety Sense.

A new package that will be available as standard or as a reasonably priced optional extra across 70 per cent of the Toyota range by the end of 2015, Toyota Safety Sense brings together features including pre-collision detection, lane-departure warning, automatic high beam adjustment and road sign assistance to make driving safer.

We spoke to Tjark Kreuzinger, Senior Manager of Safety Research & Technical Affairs at Toyota Motor Europe, to find out more about the system, the tech behind it and where it could lead.

Toyota Blog: Hi Tjark. How long have you been working on Toyota Safety Sense?

Tjark Kreuzinger: Pretty much four years. What we had before was the pre-crash safety system (which we now call pre-collision system). It’s still in production and is based on long-range radar, or on some models, radar and cameras. It’s very good, but expensive.

TB: So what is the Toyota Safety Sense unit?

TK: It’s one unit, mounted to the windscreen, which has lidar – a laser system – and a camera, so two sensors. It works at speeds up to 50mph, much more than what you’d normally expect from the ‘city’ systems that have been around up to now.

Toyota Safety Sense can fully avoid impacts at a driving speed of 30kph (18.6mph) in basically every situation. But depending on the conditions, for example in a potential car-to-car collision, where the car ahead is driving at a similar pace to the one behind, it can work at much higher speeds like 80kph (50mph).

The system is also good for giving a very accurate detection of what kind of obstacle is ahead – it does not just recognise there is something in your path, but it also classifies it.

TB: How does it do that?

TK: The best explanation would be to say that if you only have a camera, you cannot distinguish between a cardboard cutout of a person, and a real person. If there is a cardboard cutout next to the road, a camera-only system would not be able to tell if it is a human or not.

A radar-only system would not work perfectly either because it’s actually hard to distinguish between a human and something like an aluminium can because of the reflection it receives back is too similar, and it only scans horizontally so it is not as sensitive to the position of an object.

When we can use radar and a camera as well, we can make the sliding scale between activation and non-activation more accurate. A human doesn’t actually create much of a lidar or radar response, but it has a bit – and significantly more than a piece of cardboard or some other object. Combining the lidar input and the camera, the system can know very well if it’s seeing a human or not, where the human is, and then decide whether to activate the safety system.

A fusion of these technologies can deliver higher performance and better avoid any false detection.

TB: Are there additional sensors around the car?

TK: It’s just the one unit, it combines the lidar and camera. The idea behind Toyota Safety Sense is to use multiple technologies within one unit in order to make an accurate system that is accessible to more car owners and not too expensive.

TB: Will the Toyota Safety Sense system immediately take control of the car if it senses a potential accident?

TK: We know that accidents happen because drivers are not perfect. Around 90 per cent of accidents are due to driver error. This means that a driver might not detect what’s going on around them, might not react properly, or not react at all. And as a consequence accidents still happen.

One of the key Toyota philosophies is to try and inform the driver as much as possible, making them alert so they can react to a situation. We’re not trying to completely automate the system.

Our studies have shown that three-quarters to 80 per cent of people will react in a potential accident situation if they’re given a warning. So having the car ‘prepare’ itself by boosting brake pressure, while giving the driver the opportunity to react on their own is the preferred solution at this stage – we like to have the driver in control.

Of course, if the driver does not do anything to react, then the automated element of the system takes action.

The technology of our new system and the reason it’s better at detection is to give drivers more warning of possible collisions, enough for them to act and prevent a collision at higher speeds.

TB: Automated driving is a hot topic at the moment. It sounds like Toyota Safety Sense keeps the driver at the centre of what’s going on.

TK: We appreciate the technology that automated driving is connected to, because it will increase road safety. We support making more safety systems available, for example what we have here, but Toyota Safety Sense is not automated driving.

That said, it is pretty well-known that Toyota is working on automated driving systems, and especially here in Europe as there is a big push from governments and cities to make roads safe, while dealing with environmental issues and increasing traffic density.

There are definite theoretical benefits to automated driving. Once cars can talk to each other, systems will even allow for detecting problems that are around the corner, out of sight in a city condition or in a traffic jam. In Japan, Toyota is already operating a couple of cars in real traffic in order to investigate this.

We think automated driving will happen. We think customers will like it, but we do not aim for automated driving because we simply think it would be interesting – it’s the safety behind it that appeals to us and there is lot that can be done while keep the driver at the centre of things.

TB: Some features of Toyota Safety Sense give additional benefits during normal driving, such as adaptive cruise control. Do those ‘extras’ make pitching your ideas easier?

TK: Absolutely. For my colleagues, safety is the number one priority but we recognise the fact that sensors and technology developed for safety purposes can provide a driver with good information and convenience.

It’s a part of what we call the integrated approach. For example, if you have radar systems that help when you’re parking and let you know the position of your car is OK, then you have more mental resources to watch out for pedestrians appearing behind you.

When you’re in normal driving, support systems such as braking stability control, adaptive cruise control or anything like that, allow you to have better control of your inputs and your car. They help avoid accidents – stability control is a good example as it reduces single-car accidents by 40 per cent – and when you get closer to risk, the systems like Toyota Safety Sense allow the driver to get more information, earlier, before an accident could happen.

Obviously we still always focus on the passive safety of Toyota vehicles to protect occupants when a collision is unavoidable, but the next stage for my team is working on the systems to improve and speed up the rescue of people who have been in an accident.

TB: Will new features be added to Toyota Safety Sense as time goes on?

TK: We are launching the system now, and we think it has great benefits and we are pleased it will be very accessible to people – either as a standard feature or an option that is reasonably priced depending on which model someone chooses.

That said, we are not at the end of what pre-collision safety can do, so over time we are certainly aiming to continue pushing things forward. Anybody might be able to imagine what that might be – for us, that would be wider-range sensors, or additional sensors to create more of an all-around view.

Find out more about Toyota Safety Sense at Toyota.co.uk or in this blog post.