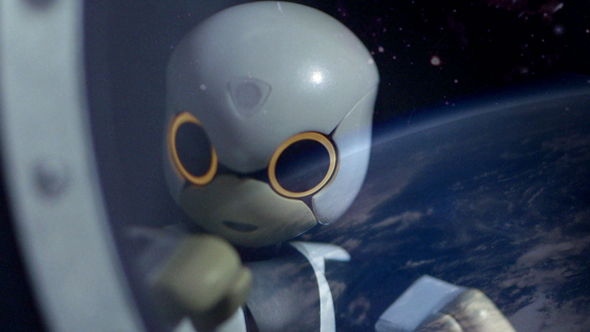 A miniature robot, developed in part by Toyota, is set to become the latest visitor to the International Space Station.

Christened Kirobo, the robot is 34cm tall, and weighs around 1kg (on Earth). He will take part in the first robot-human conversation experiments aboard the ISS when he arrives there after his scheduled launch on 4 August.

Toyota was responsible for voice and face recognition functions that are crucial to the experiments. However, before he was allowed to fly Kirobo had to prove he had the right stuff by passing a range of tests. These included a parabolic flight test to examine behaviour in ‘zero G’ conditions, and a vibration test, to ensure he was tough enough to withstand the intense force of a rocket launch.

After launch, Kirobo will disembark at the ISS and wait for the arrival of Commander Koichi Wakata later this year. In the station’s Japanese built experiment module, called Kibo, the commander and Kirobo will then take part in the first conversation experiment held between a person and a robot in space.

Kirobo is one of two humanoid verbal-communication robots developed under the Kibo Robot Project. The other, ‘Mirata’, will act as ground crew, allowing the investigation and solution of any issues that may arise during Kirobo’s time on board the ISS.