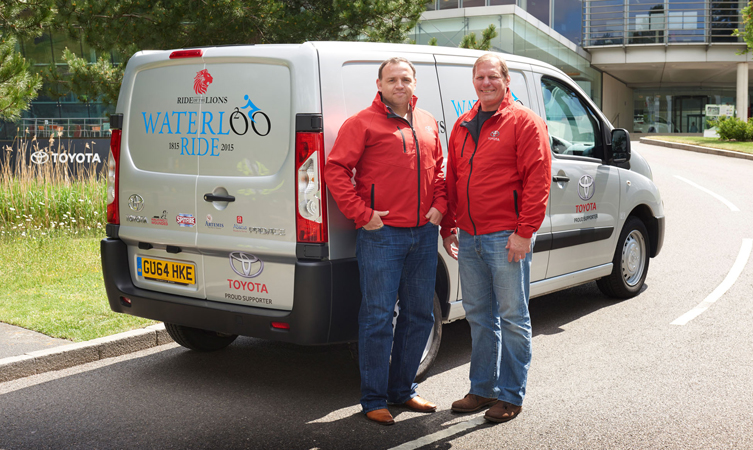 Toyota is proud to support the 2015 Ride of the Lions charity cycling event, a 200-mile journey from the historic Waterloo battlefield in Belgium to London. Recreating the route of the message of victory sent by the Duke of Wellington in 1815, the event will be raising funds for Walking with the Wounded charity for injured service personnel and The Lions Trust.

A fleet of liveried Toyota vehicles will provide four-wheeled support for the 200 cyclists taking part. The field will include former British and Irish Lions rugby stars, riders representing Walking with the Wounded and members of the public.

Peter Winterbottom and Rob Henderson are among the former Lions taking part in the event, which will depart from Waterloo next Friday, 19 June – the day that marks the 200th anniversary of the Battle of Waterloo. Appropriately, the starting point will be the battlefield’s landmark Lion’s Mound.

The sportsmen took a break from road training in the Surrey Hills yesterday to visit Toyota GB’s Epsom HQ for the handover of the Proace vans and Auris cars that will play a part in the safe and smooth running of the ride.

Winterbottom, capped 58 times for England and a Lions squad member in 1983 and 1993, said: “The phrase we use to capture the concept of the Ride of Lions is ‘the spirit of rugby on a bike’ and that’s exactly what it’s about – working with your team-mates and building team spirit to raise as much money as we can for these good causes.”

We are delighted to play a part in what is an inspiring way to raise funds and increase awareness of Walking with the Wounded and the work done by The Lions Trust. – Darren Morris, Toyota GB Finance Director

Ireland star Henderson, who ran out with the Lions in 2001, added: “It is great to see such a major brand as Toyota coming on board to support us. Its commitment adds to the quality of the event and helps inspire everyone to succeed.”

Darren Morris, Toyota GB Finance Director, is going further by taking part in the ride himself. He said: “We can’t provide Toyota bikes, but we can do the next best thing by making sure the riders have reliable and comfortable vehicles for all their kit and support team members.

“We are delighted to play a part in what is an inspiring way to raise funds and increase awareness of Walking with the Wounded and the work done by The Lions Trust. Toyota wishes everyone taking part a safe and successful journey.”

Details of their JustGiving page can be found here.