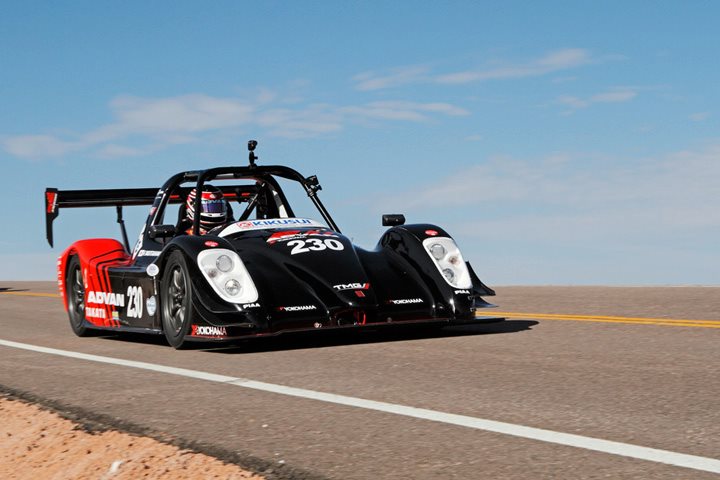 Toyota’s first electric car at Pikes Peak was the TMG EV P002 racer, which competed at the famous hillclimb in Colorado in 2012 and 2013.

The EV P002, driven by Japanese driver Fumio Nutahara, took on the challenging 12.42-mile course which has a finish line at more than 4300 metres above sea level. The summit is so high that it is known to reduce performance in combustion-engined cars by up to 30% due to the thinness of the air.

The electric motor in the TMG EV P002 meant the thin air played no effect, allowing Nutahara and TMG to post an impressive time of 10min 15.380sec at an average speed of 70.2mph – more than enough to top the electric car category.

In 2013 an upgraded version of the Radical-based car returned to Pikes Peak, with superstar race driver Rod Millen behind the wheel.

The 61-year-old New Zealander had previously triumphed at the event nine times, setting a string of record-breaking times in his outlandish Toyota Tacoma pick-up truck.

Toyota’s TMG EV P002 electric race car offers a staggering 1200Nm of torque and is capable of a top speed of 144mph.

It raced on a very different Pikes Peak course than that offered in the past. For starters, the whole route has been covered in asphalt, placing new demands on tyres and aerodynamics. As a result, the car has been in the USA since May, testing for the event.

The first two days of testing, supported by engineers from TMG and TRD USA, focused initially on driver comfort and systems checks.

Millen said: “The balance was very good and the car behaved predictably at all times. This race car is unique and I really appreciated the seat time in the car. This gave me the chance to learn about the advanced electric powertrain capabilities and I could experience how the car changes over a race distance. Even when the tyres were past their best at the end the car was still fast and controllable. Now I am looking forward to driving an electric race car at Pikes Peak for the first time.”

Testing has since moved to focus on set-up evaluation along with work on the aerodynamics, powertrain and cooling system, while a new carbon ceramic brake system was also analysed.

The TMG electric powertrain ran faultlessly throughout while the new aerodynamic package produced a three-fold increase in total downforce. The reduced weight of the car compared to last years’ configuration also contributed to an overall performance improvement.

Steve Wickham, TRD Vice President, Chassis Operations said; “I am encouraged with the reliability and performance shown so far. Rod is happy with the car and I am looking forward to see how we stack up on the Mountain compared to last year and more importantly the strong EV competition.

“The multinational team from TRD and TMG are working together well which is critical for me as team manager especially as the Mountain schedule is so mentally and physically demanding on all of us. All of the many individual improvements in downforce, braking and powertrain we have made to the car seem to working well together. The team is ready to step up to the challenge; we all badly want to retain our title in the EV class.”

Unfortunately for Millen and the team, changeable conditions hindered their attempts to better the 2012 result on the hill. The Kiwi driver finished 16th overall, fourth in the Electric Car category, with a best time of 10min 24.301sec.