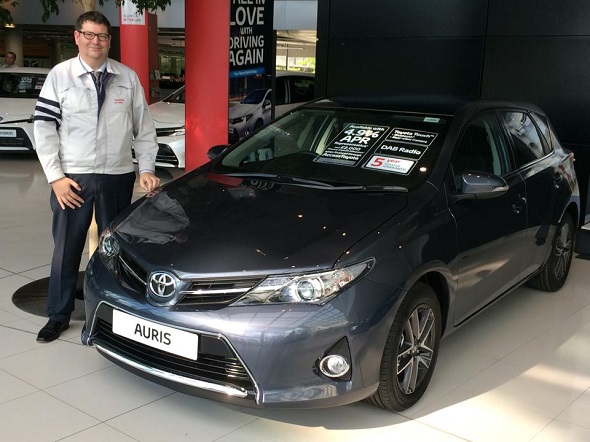 Recently, we announced news of an industry-first partnership that Toyota in the UK has formed with Kew Gardens.

At Toyota’s Burnaston car manufacturing plant in Derbyshire, the aim is to create a ‘Green Grid’, that demonstrates how a working industrial site can successfully support biodiversity through environmental land management and secure a green legacy for the future, without compromising the cost or efficiency of its core business.

To mark the tie-up, we caught up with Toyota Motor Manufacturing UK Ltd (TMUK) Facilities & Environment Division section manager, John Malpas to talk about how Toyota is leading the way in sustainable manufacturing and uncover what the future holds for the home of Toyota Auris and Avensis.

Education: Graduated from University of Manchester in 1989, MS in Environmental Engineering.

Toyota CV: Joined Toyota Motor Manufacturing UK as an engineer in 1993, transferred to Toyota Motors Europe (TME) in 2000. Returned to TMUK as a section manager  in 2002.

Toyota Blog: The partnership with Kew Gardens is the first of its kind for the automotive industry. At a European level, what other firsts has TMUK actioned?

TB: How involved were Kew gardens in the decision-making processes for the development of the land surrounding TMUK, and how will you work together in the next 10 years?

JM: TMUK created  the original concept for sustainable manufacturing and the creation of an ecological park and recognised that they needed technical support to implement the concept and approached Kew for support.  Since then, Kew have been instrumental in designing the Green Grid project, and helping us to implement the conservation areas that you can now see at the plant.

TB: Are the wetland, woods and meadow accessible to visitors?

JM: We have an annual family day which is attended by over 3000 people. We also have organised visits, and we share the areas with the visitors, but it’s not accessible to the public daily as it is within the site’s fenceline.

TB: What is TMUK’s end goal for the project?

JM: The end goal is to create an ‘eco plant’. This is one that is environmentally sustainable and produces hybrid vehicles that are kinder to the environment – that is the vision for Burnaston.

TB: What environmental efforts are unique to the TMUK Burnaston plant?

JM: In the last 20 years, there’s been two or three notable environmental efforts which we have implemented that are industry firsts, and were at the time, or still are, industry unique.

For instance, in 2003 we became the first car manufacturing plant to send zero waste to landfill – and maintain it. Then, in 2008 we achieved zero incineration – we’re the only UK plant that has done so.

Before that there were other achievements, for example we were the first plant globally to use water-based paint in the painting of the car bodies; environmentally, those three are key achievements for TMUK.

TB: How does sustainability at TMUK relate to the Toyota Production System (TPS)?

JM: There are at least two elements; certainly ‘Kaizen‘ or continuous improvement, is built into our sustainable manufacturing strategy. The other way is that we are engaging staff members and it’s a team effort – their mutual trust and respect drives improvement (in line with the Nemawashi pillar).

TB: Are there plans to involve the wider community in the ongoing upkeep of the 2.35 million square metre site?

JM: We’ve been running projects with the YMCA to give young people the opportunity to develop new skills and improve their chances of employment – specifically they’ve been working on the Green Grid and habitat restoration. With regards to the wider site, we haven’t decided the direction to take with the community just yet.

TB: What do you regard as the greatest environmental achievement since TMUK was established in 1989?

JM: Becoming the first Toyota manufacturing facility in Europe to send zero waste to landfill, in 2003. It sounds easy to say, but that was a very difficult project that took around four years to develop and implement. When we reached that goal, it then took a lot 0f effort to maintain and stabilise until zero waste became a part of normal operations.

Factory to forecourt: How a car is built at Burnaston

13 pillars of the Toyota production system