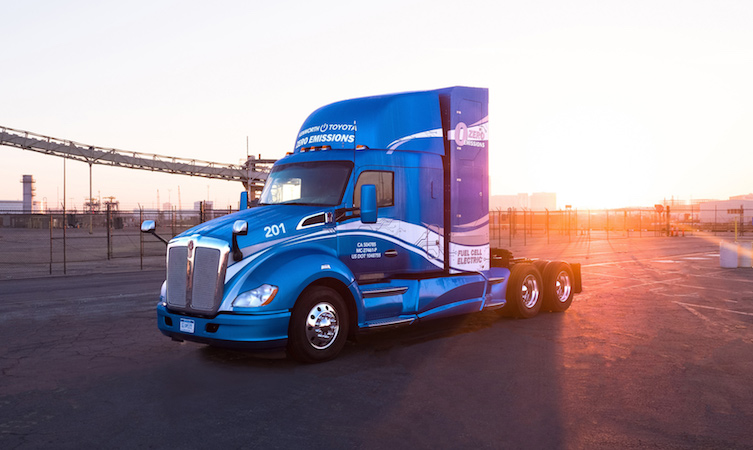 Toyota is putting an additional ten heavy-duty trucks powered by the Mirai’s hydrogen fuel cell on the roads of California as it expands its vision for zero-emissions haulage.

The initiative, named Project Portal, began in 2017 with a single truck that was propelled by two Toyota Mirai fuel cell stacks. It hauled freight from the ports of Los Angeles and Long Beach to rail yards and warehouses across the Los Angeles basin.

Last year the ‘Alpha’ truck was joined by an uprated ‘Beta’ vehicle that can cover greater distances on a tank of fuel. It is also more comfortable inside and easier to operate. Now, Kenworth Truck Company and Toyota Motor North America (TMNA) are collaborating to develop a fleet of zero-emissions Kenworth T680s powered by Toyota hydrogen fuel cell electric powertrains.

The trucks, which have a hauling range of about 300 miles, will transport cargo across the Los Angeles basin and to inland cities such as Ontario and San Bernardino while generating zero emissions, other than water vapour.

“The original Portal proof-of-concept truck has logged nearly 10,000 miles,” explained Bob Carter of TMNA. “Thanks to the support of the Port of Los Angeles and the California Air Resources Board, we’re putting ten new trucks on the road to haul even more goods across the Los Angeles area, all with zero emissions.

“This is not a science experiment to improve air quality in and around the Port of Los Angeles – the goal is to make a difference in society. Imagine what we can do with the scalability of this project!”

How does the zero-emissions Kenworth T680 work?

The Kenworth T680 with the Toyota Mirai fuel cell electric powertrains combines hydrogen gas and air to produce electricity. The electricity powers electric motors to move the trucks, while also charging the lithium-ion batteries to optimise performance as needed.

Sophisticated power management systems apportion electric power from the fuel cells to the motors, batteries, and other components, such as the power steering and air brake compressors. The hydrogen fuel cell electric powered Kenworth T680 has a range of more than 300 miles under normal operating conditions.

The trucks form part of a larger project that will put fuel cell electric tractor units, hydrogen fuelling infrastructure, and zero-emissions cargo-handling equipment into operation in the Los Angeles basin in 2020.