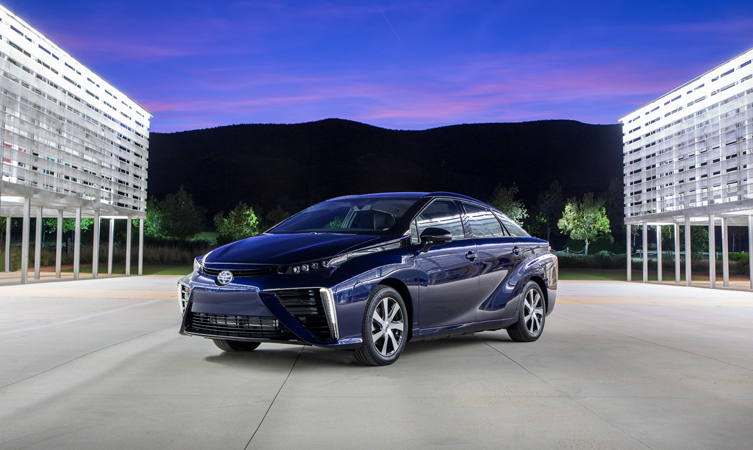 Toyota’s president Akio Toyoda has seen the future, and now you can too. Called ‘Mirai’, this ground-breaking vehicle from is Toyota’s new fuel-cell vehicle, unveiled in November 2014 and due for release in the UK in September 2015. Who better to introduce you to Mirai than Toyoda-san himself, in the following video:

Mirai, meaning ‘future’ in Japanese, marks a turning point for in the history of the automobile, the next step to delivering a world that is safer, greener and easier for everyone.

Mirai’s revolutionary hydrogen-powered fuel cell technology delivers the practical benefits, range and convenience of a conventional saloon, all while emitting only water vapour. To quote Akio Toyoda, “this is a car that lets you have it all with no compromises.”

In the same way that Toyota paved the way for mass adoption of hybrid technology with its first-generation Prius, the automaker sees Mirai as a major step in the adoption of hydrogen fuel-cell technology, diminishing the world’s dependence on oil and reducing harm to the environment.

Mirai is powered by hydrogen – the most abundant element in the universe – that can be made from virtually anything, even rubbish. If you think that’s a load of bullsh*t, well, we can use that too…

Mirai is tomorrow’s motoring experience, realised today. Like Toyota’s hybrid vehicles, Mirai is designed so that you can jump in and immediately feel at home, even though it’s based upon cutting-edge technology. It looks great, is incredibly safe, it’s fun to drive and is kinder to the environment than conventional vehicles.

Akio Toyoda sums up Toyota’s vision for this new model: “This isn’t just another car. This an opportunity, an opportunity to really make a difference, and making a difference is what Toyota is about. The future has arrived, and it’s called ‘Mirai’.”