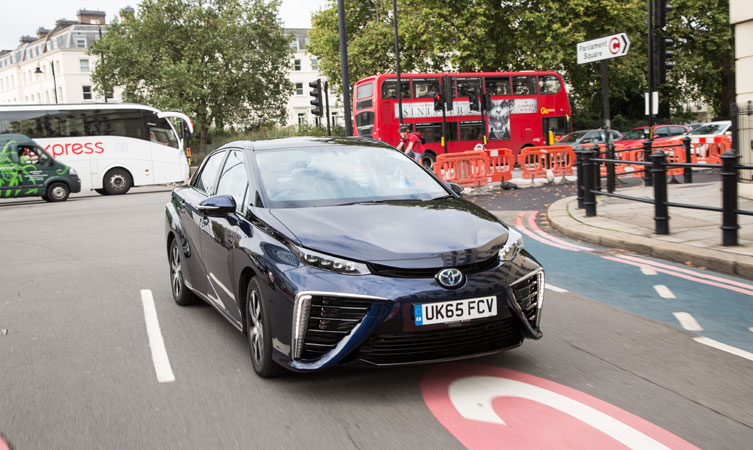 The Toyota Mirai has finally arrived in the UK and after months of rumours, news, views and speculation the first reviewers are now getting behind the wheel.

So far, the hydrogen-powered fuel cell sedan has been given a warm reception from those who have driven it. Read on to see extracts of the reviews released so far, and click the links to see the full verdict from each publisher.

They say: “This is arguably our best look yet at the future of personal mobility, with the Mirai doing a great job of driving like a normal car. Suffice to say, the future of zero emission motoring is nearly here.”

Autocar also gave the Mirai four stars, with their review commenting on the striking styling, high interior quality and surprising agility on the move.

They say: “The Mirai is a breakthrough achievement – one that is sure to influence the way rival car makers set about mapping out their electric car future. It delivers all the environmentally friendly advantages of a battery-powered car without the need to plug into mains power for extended periods.”

Autocar also posted a blog about his experience in the car, adding: “Toyota should be applauded for not just talking about whether or not hydrogen cars can work and instead getting on and making one. We live in exciting times.”

T3 said that the Mirai shows the viability of hydrogen-powered cars in the future, and also commented on the ‘plush’ and tech-filled interior.

They say: “The Toyota Mirai is an incredibly impressive car, as a proof on concept and a feat of engineering, its very hard to fault, it’s accessible, simple and appealing. It’s also an incredibly important car, showing everyone just how accessible and viable hydrogen is as an alternative fuel source.”

With an opening line that reads: “Peter Kay says garlic bread is the future. Toyota reckons it’s hydrogen”, the Sun Motors Mirai review certainly grabs your attention. (There’s a reference to onions too, so don’t read it on empty stomach).

They say: “Full marks to Toyota. Given the complex technology involved, the Mirai still drives like a ‘normal’ car. It’s smooth, silent, with instant acceleration, single-speed gearbox and you can’t stall it. No one can. Not even your gran.”

The Daily Telegraph said the Mirai ‘drives like the future, with hard acceleration from a standstill due to all that electricity on tap, and a touchscreen with iPad-style swipey infographics.’

They say: “It’s impressively quiet, with wind and road noise largely eliminated, and the regenerative brakes work their magic with surprising subtlety.

Top Gear highlighted that although the UK’s hydrogen infrastructure is in it’s infancy, the actually fuelling the Mirai is ‘quick, clean and stress-free’, adding: “Where fuel cell cars have pure EVs licked is in topping up, or ‘recharging’, the twin carbon-fibre tanks – it takes just three minutes to pump in 5kg of H2, whereas today’s batteries take hours to recharge.”

They say: “What the Mirai proves is that although expensive, fuel cell technology works and, as a driving experience at least, it’s ready to enter the mainstream. Hats off to Toyota for taking the plunge.”

They say: “The Mirai is sure to influence how car makers set about mapping out their electric car future. It delivers all the environmentally friendly advantages of a traditional battery-powered car without the need to plug into mains power for extended periods.”

Manchester Evening News describes the Mirai as ‘incredibly quiet with a surprisingly strong, linear performance.’ They also mention the calm, relaxing experience of driving the car and it’s handling and ride quality.

They say: “The Mirai is definitely an expensive proposition and unless you live near a refuelling station it doesn’t yet make sense. But it performs better than you’d imagine and represents a brave step forward for Toyota and for hydrogen fuel cell motoring.