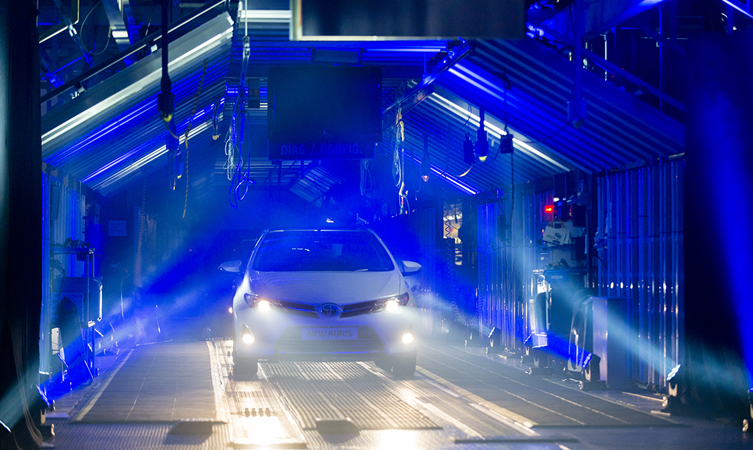 Toyota Manufacturing UK (TMUK) has earned the title of the Britain’s best training partner in the 2015 SEMTA Skills Awards, in recognition of its work with organisations and businesses local to its Burnaston car plant near Derby.

Semta, a sector skills council, brings together employers and educators to promote the development of higher skills for British engineering and advanced manufacturing. TMUK emerged the winner in a hard-fought competition to take the award together with its partner SMEs and community organisations.

Tim Freeman, TMUK’s Director of Environment, Quality and Production Functions, accepted the award at a gala presentation evening in London Tuesday (24 February). He said: “We are committed to people development by supporting our local community, SMEs and supplier community, as well as our own staff. By taking this approach we can contribute to developing skills in the local economy, and in the manufacturing and engineering sector.”

Ann Watson, Semta CEO, said: “Toyota is a world-class company which is reflected in its superb training programme and facilities. It is helping create the engineers of the future, which is vital if the UK is to continue to deliver the skills which make our engineers the best in the world.”

In 2013, TMUK introduced a fully managed apprenticeship programme, including attraction, recruitment and training delivery, hosted at an Apprentice Development Centre establoished on-site at Burnaston in partnership with Burton and South Derbyshire College. Currently more than a dozen companies send their apprentices to train at Toyota.

“We are committed to people development by supporting our local community, SMEs and supplier community.” Tim Freeman, TMUK director</blockquote

TMUK’s key partners in its activity include, among its SME associates, Gestamp Tallent Ltd and Pektron Group Ltd, and YMCA Derbyshire.

Phil Carr, Training and Development Manager at Gestamp Tallent, said: “We’ve been a business partner with Toyota for many years and the relationship has always been one of support rather than demand. This approach has now been extended in the growth of our engineering capability with the apprentice training. Toyota has given us access to a world-class scheme based on the traditional values of a good apprenticeship.”

YMCA Derbyshire has worked with Toyota to support local disadvantaged young people. In partnership with the Society of Motor Manufacturers and Traders (SMMT) and the Foyer Foundation, Toyota delivers a 12-week programme to improve the work and further education prospects for young adults who are not currently in employment, education or training.

Gillian Sewell, YMCA Derbyshire CEO, said: “Each day in my work I recognise Toyota’s contribution and achievements for YMCA residents. When they complete the training it is evident how our residents have increased their self-esteem and sense of purpose, and improved their life chances. Toyota not only says it cares about its local community, it works to prove it.”