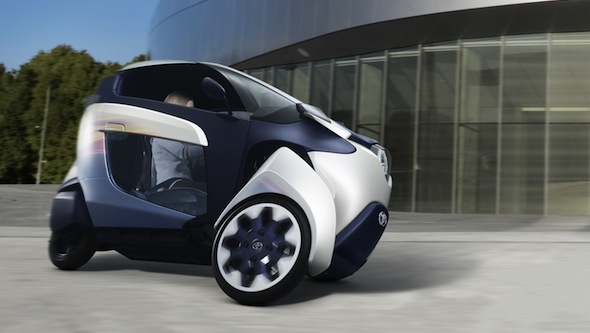 Toyota’s funky i-Road personal mobility concept  has been added to Toyota Motor Corporations’ ‘Ha:mo’ urban transport system trials at Toyota City in Japan. The concept made its global debut at the 2013 Geneva motor show, and will be used alongside existing Toyota COMS personal mobility vehicles from early next year.

Ha:mo is an urban transport system designed to combine public and private transport – its aim is to improve traffic flow and minimise emissions. The system comprises a combination of electric vehicle car sharing and traffic routing information –ensuring city dwellers use the most appropriate form of transportation.

The introduction of the i-Road concept is just one part of the Ha:mo systems’ expansion. The number of COMS electric vehicle and Yamaha power-assisted bicycles on the Ha:mo fleets will increase from ten to one-hundred each in October, and a Ha:mo smartphone application is to be launched. The app will allow users to reserve vehicles, access local bus routes, and will send push notifications each week.

Seventeen new Ha:mo stations will open from October – all in close proximity to main line train stations and major public facilities. The introduction of a fee system from October 1 will ensure the project is financially viable; it will cost two-hundred yen (£1.30) for the first ten minutes of use, and twenty yen (£0.13) for each additional minute.

Find out more about the i-Road concept here. Visit the designated section of the Toyota Global website for further information about the Ha:mo scheme.