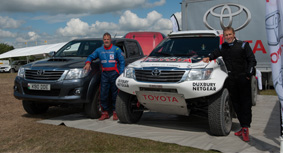 At the 2014 Goodwood Festival of Speed recently, we managed to get together a real workhorse alongside its racing thoroughbred cousin – a new Toyota Hilux pick-up and the Imperial Toyota Hilux that fought for a class victory in this year’s gruelling Dakar rally.

The standard Hilux belonged to former double British Rally Champion David Llewellin, who recently collected his pick-up from Motorline Toyota Cardiff. For Goodwood, David used his Hilux to transport his rally car to the famous Festival of Speed, however the pick-up is usually put hard to work on his Pembrokeshire farm.

“The Hilux is perfectly suited to life on the farm,” said David. “It’s tough, it’s dependable and it won’t let me down.

“But on the drive up to Goodwood, pulling the trailer, it proved to be comfortable and showed it’s quality interior too. It’s a class act – I love it.”

The Imperial Toyota Hilux netted a class victory and fourth place overall in the 2014 Dakar rally and was a star attraction on the Goodwood rally stage. We caught up with former British Rally Champion and WRC driver Alister McRae after he blasted round the Goodwood stage to see what he thought of the Hilux.

“It was good to be back at Goodwood. I hadn’t been there since 2008 and seeing how the show has grown was impressive,” said Alister.

“The Hilux is an amazing machine. When you consider it’s double the weight of a WRC car, yet how it handles is a testament to the car’s design. The biggest difference between a Hilux and the WRC car is the weight and how it feels under braking, but it doesn’t roll around as much as you think it would.

“The stage at Goodwood is obviously nothing like what the car was designed for – it’s designed for high speed stages across the desert – yet how it felt was very impressive. Let’s put it this way, you couldn’t take a WRC car into the desert!

Now that Alister has had a taste for the Imperial Toyota Hilux, would he like to get behind the wheel of the machine and fight for the win on the Dakar?

“I’ve competed in the Dakar twice before for teams on a minimal budget, but the aim, whether it’s for 2015 or 2016, is to get into a top 10 car. Obviously the Hilux is a top car and certainly a car that’s capable of winning.”