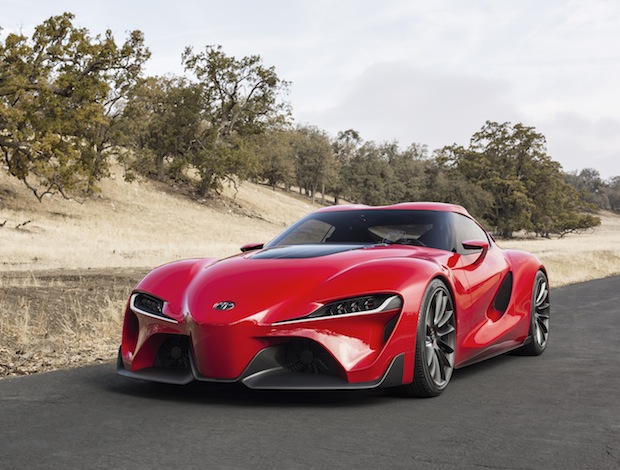 The Toyota FT-1 concept is Toyota’s Calty design studio’s vision of the ultimate sports car, and it is already being hailed as the symbol of Toyota’s design future. Indeed, the alpha designation ‘FT’ stands for Future Toyota.

The California-based team produced a car that embodies striking modern design. It also makes subtle visual references to Toyota’s sports car history, going back to the legendary 2000GT of 1967.

The racecar-like exterior expresses powerful performance through its pronounced front wings and sharply contrasting lines as well as the large air intakes and exhaust ports, while the retractable rear wing points to its aerodynamic qualities.

The FT-1’s front engine/rear-wheel drive configuration allows the cockpit to be set towards the rear of the car, creating classic sports car proportions while optimising weight distribution. The wraparound windscreen and side glass treatment are a clear nod to the design of the original Toyota 2000GT.

Inside, the ergonomics and cabin layout capitalise on the car’s low centre of gravity, maximising enjoyment for the driver. A delta-shaped display zone reinforces the feeling that the driver is at the heart of the action, fully connected to the car. This quality is enhanced by the Formula 1-style steering wheel and a colour head-up display that projects key information onto the windscreen, just above the wheel. The design pushes the A-pillars as far back as possible, to increase visibility when cornering.

Traditionally, Toyota’s design decisions have been driven by consensus among a large group of people. Yet for the FT-1 this process was streamlined as part of a company-wide movement to give Toyota products more energy and passion. This approach has been fundamental to the development of the FT-1, a concept that captures Toyota’s aim of creating cars that connect more deeply with customers on an emotional level and generate a more satisfying ownership experience.

CAN I DRIVE THE TOYOTA FT-1?
Yes, but only in the virtual world. The Toyota FT-1 concept car is a playable car in  Gran Turismo game.

WHAT HAS THE MEDIA SAID ABOUT THE TOYOTA FT-1?
The Toyota FT-1’s status as a show-stealer at the Detroit motor show in 2014 was confirmed by comments from the UK’s media.
Steve Fowler, editor-in-chief of Auto Express, put the FT-1 at the top of his list of best show cars in Detroit, describing it as the ‘undoubted star of the show’.

Jim Holder, editor of Autocar commented that it ‘embodies a sea change at Toyota’.

What Car? editor John McIlroy described the FT-1 as ‘a fabulous achievement.’

Richard Hammond in the Daily Mirror said the FT-1 is about ‘Toyota making cars that people will fall in love with’, while Top Gear colleague Paul Horrell described the concept car as a ‘serious, high-end sports car; beautiful, too.’

It wasn’t just the motoring press that reacted positively to the FT-1. Electrical product review site Pocket-Lint said the FT-1 was ‘definitely something to get excited about’, and technology site T3 hopes Toyota turns the concept ‘into a real car’.