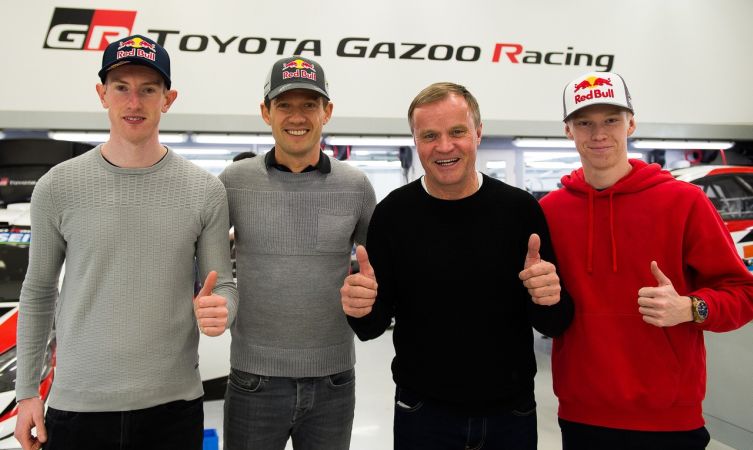 Managed by team principal Tommi Mäkinen (second from right), the trio will make for a perfect blend of speed, experience and youth behind the wheel of the Toyota Yaris WRC.

The trio will make for a perfect blend of speed, experience and youth in the Yaris WRC

Sebastien Ogier, guided by co-driver Julien Ingrassia, established himself as the dominant force in the WRC as he won six consecutive drivers’ titles between 2013 and 2018. Hungry to reclaim his crown and add to his tally of 47 victories, the 35-year-old from France has signed with Toyota for the 2020 season, placing his trust in the car and team that won the 2019 drivers’ championship with Ott Tänak.

While his maiden victory came on home soil in Wales in 2017, Elfyn Evans has proven himself as a fast and consistent driver across the wide variety of different surfaces and conditions experienced in the WRC. Joining Toyota for the next two years, the 30-year-old and his co-driver Scott Martin will continue the strong working relationship they started in 2019.

Kalle Rovanperä will embark on his rookie season in a World Rally Car in 2020 aged just 19, but the youngster from Finland has long been regarded as one of the sport’s most exciting prospects. Having previously had the chance to test the Yaris WRC as a 16-year-old, he has now signed a two-year contract with the team. Together with co-driver Jonne Halttunen, Rovanperä won the 2019 WRC 2 Pro title with five wins from 11 starts, demonstrating his readiness to step up to the next level.

Read more: The big numbers at the heart of Toyota’s 2019 WRC campaign