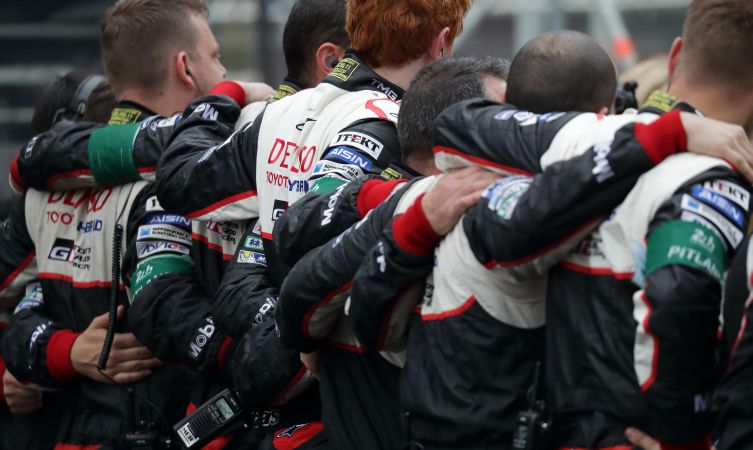 When it comes to competing in the annual 24 Hours of Le Mans, Toyota has always raced to win. Yet through a succession of near-wins, Toyota at Le Mans up until 2018 unfortunately perpetuated the adage of being ‘always the bridesmaid, never the bride’.

When did this pattern begin and on how many occasions has it occurred?

Toyota’s Le Mans history dates back to 1985 when we began supplying engines for Group C cars prepared by the Dome and TOM’S race teams. A factory-supported Le Mans campaign with TOM’S began in 1987, which eventually culminated in a best finish of second place in the 1992 24 Hours of Le Mans.

The model which took this honour was the spectacular TS010, designed by famed race engineer Tony Southgate to comply with newly revised Group C regulations. This allowed the car to be equipped with a Formula 1-style 3.5-litre V10 engine, which in endurance tune for Le Mans was rated at around 600bhp.

Click here to learn more about the Toyota TS010

Cancellation of the World Sportscar Championship left the TS010 without a series to race in but the introduction of new GT rules reopened the way for Toyota’s previous generation Group C car to be adapted to new LMP1 specifications. The revised 94C-V was run by team SARD and backed by Toyota in the 1994 24 Hours of Le Mans.

Around 14 hours into the race the SARD-Toyota 94C-V took the lead and stayed ahead for a further eight hours, accumulating a 42-second advantage. But then, just 90 minutes from the chequered flag, a transmission issue stopped the car in its tracks within sight of the pit lane entry. The car was eventually coaxed into a gear and rolled into the pits under its own steam, where it took 13 precious minutes to fix the linkage issue and rejoin the race.

The lead may have been lost but an outstanding finish by British driver Eddie Irvine saw the Toyota claw second place from Porsche with just two laps to go.

Toyota returned to Le Mans in 1998 as a full works outfit with three new GT-One (also known as TS020) models and an impressive line-up of ex-F1 drivers. The car was purpose-built to win at Le Mans and assembled by a hand-picked team lead by Le Mans-winning designer Andre de Cortanze. Immediately competitive, the GT-One qualified in, you guessed it, second place, and held on to that position until the final hour of the race.

However, the team’s most successful Le Mans campaign actually came in 1999, when the new white-nosed GT-One locked out the top three qualifying positions and posted a new lap record in the second half of the race. Yet the car wasn’t sufficiently able to maintain that pace to the chequered flag, eventually leaving the #3 car to come home in second place. Again.

Click here to learn more about the Toyota GT-One

Having departed to concentrate on F1, Toyota returned to Le Mans and the FIA World Endurance Championship in 2012 with an innovative petrol-electric hybrid race car. It combined a naturally aspirated 3.4-litre V8 petrol engine with super capacitor-based hybrid technology that could provide an additional 300bhp on-demand.

Although the new TS030 Hybrid won half the races it entered during that debut year, Le Mans was not among them. Instead, its finest hour was reserved for 2013, where Toyota’s racing hybrid system demonstrated excellent reliability throughout the course of the event yet was ultimately foiled by pit stops that coincided with safety car sessions.

The #8 driving team of Davidson, Buemi and Sarrazin eventually delivered Toyota’s fourth second-place finish in the famous race, in so doing adding further proof that being the first loser had become more than a mere coincidence.

Click here to learn more about the Toyota TS030 Hybrid

No second-place finish has ever been as heartbreaking as Toyota’s campaign in the 2016 24 Hours of Le Mans. Ultimate victory slipped from the team’s grasp in the closing moments of the race, gifting Porsche the win and promoting the third-placed #6 Toyota into second. For the fifth time.

From a bookie’s perspective, Toyota was not tipped to win the race. However, the TS050 Hybrid’s new 2.4-litre turbo engine and uprated 8J hybrid system made it one of the fastest LMP1 cars in the field yet almost 8% more fuel efficient. All of which made for a fascinating mix of pace and pit stop strategies.

From a solid second-row start, Toyota delivered one of the closest fights in Le Mans history, contesting an intense battle with Porsche for the entire 24 hours. The #5 crew of Davidson, Buemi and Nakajima were poised to win, having led the race for five minutes shy of 24 hours, when a sudden loss of power sidelined their car on the penultimate lap. Similar to the unfortunate incident in 1994, the failure also happened achingly close to the pits.

Remind yourselves of the heartbreak by watching the video below.

Click here to learn more about the Toyota TS050 Hybrid

Toyota at Le Mans up to this point comprised 18 Le Mans starts since 1985 and six podium finishes, five of which were second-place finishes. Fortunately things changed for the better in 2018…