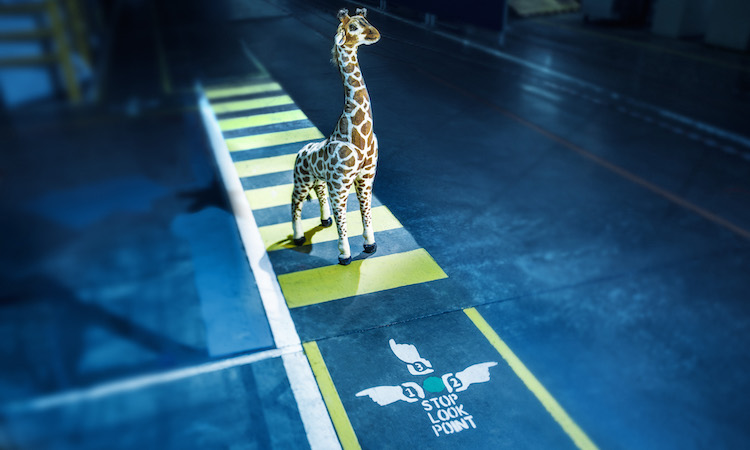 You’re probably familiar with the zebra crossing, but have you ever seen a giraffe crossing? No, it’s not the start of a bad joke – it is, in fact, an important feature in TMUK’s facilities that helps the entire Toyota Production System to operate as intended.

‘Just-in-Time’ is one of the two concepts upon which the Toyota Production System is founded. Also known as ‘lean manufacturing’, it essentially means making only what is needed, when it is needed and in the quantity needed. It’s a highly efficient way of working that allows Toyota to build its vehicles in the shortest possible amount of time.

Logistics planning is crucial for ‘just-in-time’ operation, as parts have to be delivered to where they are needed in time to keep production moving. In theory, that’s simple, but in practice it can be challenging as people also need to move around the factory. And when people are moving in the same space as machinery, there’s an obvious safety risk.

The solution is the giraffe crossing, a yellow-striped zone at every point where a walkway crosses a delivery route. The crucial difference between TMUK’s giraffe crossing and a conventional zebra crossing is that inside the factory, logistics traffic has priority rather than pedestrians.

The giraffe crossing is a prime example of how safety is the top priority in TMUK’s facilities. From day one and throughout their career with TMUK, every member receives comprehensive safety training. Safety is the first agenda item at each pre-shift meeting, and before each shift begins, all machinery and equipment undergo itemised safety checks. TMUK also ensures that its members are fit and able to carry out their role safely, both for their own safety and the safety of others.