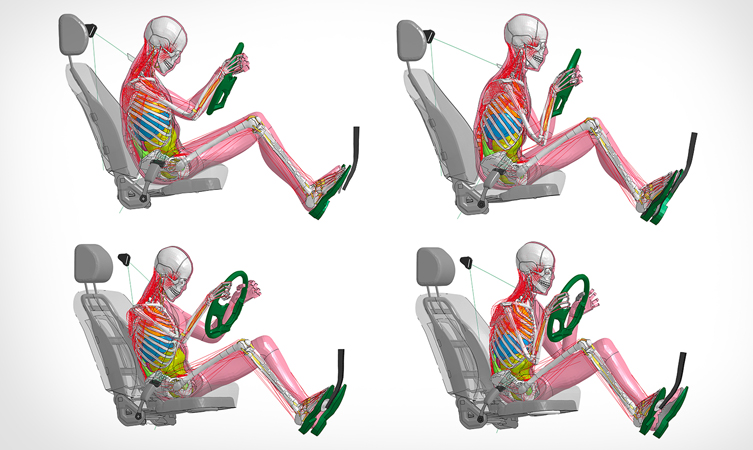 The safety of the millions of cars we put on the road is a top priority at Toyota. We draw on decades of real-world motoring knowledge and exhaustive research to make sure that you can depend on our vehicles when you need them most.

But how can you be sure a car’s safety features will give you and your passengers the right protection, if an accident happens? Will the seatbelts keep you in place, will the airbags prevent your head from hitting hard surfaces and how will the shock of impact affect your body – inside and out?

Of course you can’t test new technologies on real people, and traditional crash test dummies can only match people’s weight and size – not the complex nature of the human body, or the way people instinctively move in a danger situation.

We have met this challenge by creating a virtual human computer model called THUMS – Total HUman Model for Safety.

It is so sophisticated, it can simulate many different aspects of the human form, from skin and bone to muscle tissue and internal organs, allowing virtual methods to be used to understand the real injuries people might suffer in a road accident.

We have made great progress and crashed thousands of cars (both real and virtual) since we began developing the modelling system in 1997.

Year by year, we have made constant improvements to increase the amount of valuable information our research and development teams can obtain, even before a car undergoes a physical crash test.

We launched the first version of THUMS in 2000, and since then it has passed through four significant upgrades, each adding a new layer of capability. Building on the basic human body structure, we added face and bone detail, then a precise model of the brain. Version 4 allowed close study of how internal organs might be affected in a crash.

People come in all shapes and sizes, so in 2011 we extended the range of body types THUMS can replicate to six, including different size men, women and children – and even elderly people.

One of the most remarkable developments came in 2015 when a further refinement of THUMS was able to demonstrate the influence of a driver or passenger realising there is a going to be an impact and instinctively bracing themselves.

Of course ordinary crash test dummies cannot be programmed for this kind of reaction, but our model lets researchers study how it affects the performance of restraint systems, such as seatbelts and airbags, and active safety features such as the pre-collision systems that are a key part of today’s Toyota Safety Sense package.

Previously THUMS could simulate changes in posture after an accident has happened, but the addition of a muscle modelling feature provides another layer of useful intelligence.

Understanding the way muscles are activated gives us not only a more accurate insight into the way the body responds in a collision, but also a better understanding of the kind of neck injuries that can occur.

Ernesto Mottola works on model-based development and explains the greater benefits now being gained from the latest THUMS model.

“The addition of posture simulation means that the model approximates human behaviour more closely,” says Mottola. “The effect of posture on body movement during a collision can now be taken into account and this allows us to predict the risk of injury more accurately.”

Safety is one of the foundations of our business and our mission is to design vehicles that provide people with the safest and most responsible mobility. We believe THUMS is a technology tool that can make a big contribution to achieving this goal.

As a responsible manufacturer, we recognise the benefits THUMS can bring to society, so we are not limiting its use to our own R&D teams, but making sure it can be accessed by others as well. We have made key parts of our THUMS program commercially available and are keeping the model open, so that further modifications and improvements can be put forward by the wider research community.

The THUMS model is now being used in safety research by other major car makers, such as Audi, Volvo, Renault and Daimler, and components and parts suppliers. Even the USA’s space exploration agency, NASA, has used it in the design process for Orion, a spacecraft that could lead the way for taking man to Mars.

It has also been put to good use to help design safer racing cars.

We are still discovering and exploiting new opportunities for using THUMS, as Mottola explains: “THUMS has opened the door to a wide range of future possibilities that extend beyond safety. We are looking at expanding its capabilities into ergonomics and for the assessment of ride quality and seat comfort. We see THUMS as having the potential to become a kind of virtual driver.”