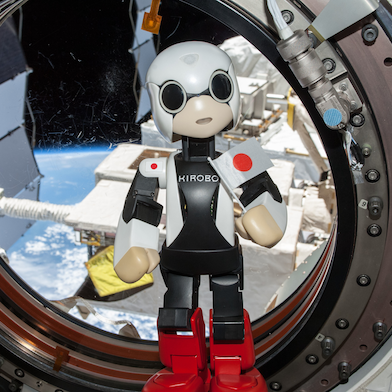 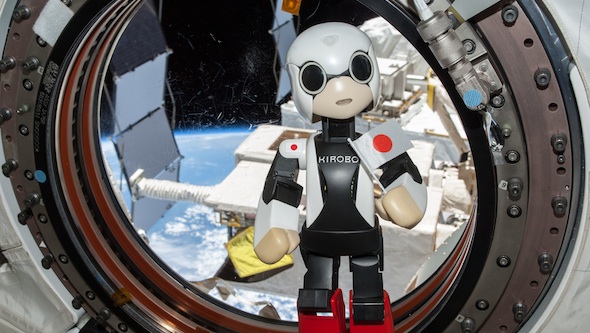 Kirobo, the robot astronaut developed with the help of Toyota, has become the first robot to speak in space.

Kirobo’s historic first words in space reflected the importance of the pint-sized robot’s 18-month long mission: “On August 21, 2013, a robot took one small step towards a brighter future for all.”

Kirobo’s space mission started in the early hours of August 4th with the successful launch of H-IIB Launch Vehicle No. 4 from the Tanegashima Space Centre in Japan. Sitting on top of the launch vehicle was Kounotori 4, a Japanese cargo vehicle containing the 34cm robot. After six days in orbit, Kounotori 4 was expertly plucked from space by the crew of the International Space Station (ISS) using the station’s robotic arm.

Watch the video of the launch, and see Kirobo on board the ISS, in the video below.

Later this year, between November and December, JAXA (Japanese Aerospace Exploration Agency) astronaut Koichi Wakata will arrive on Expedition 38 to become the first Japanese astronaut to assume command of the ISS. Once on board, at an orbiting altitude of around 400km from earth, Commander Wakata will take part in the first-ever conversation held between a human being and robot in space. The conversation will take place in the Japanese Experiment Module, nicknamed ‘Kibo’ after the word for ‘hope’ in Japanese, and will utilise the voice recognition software that Toyota contributed to the project.

Toyota plans to use experience gained from the orbital experiments to improve its Partner Robots and other interactive conversation technology.

Find out more about Kirobo on his official website.