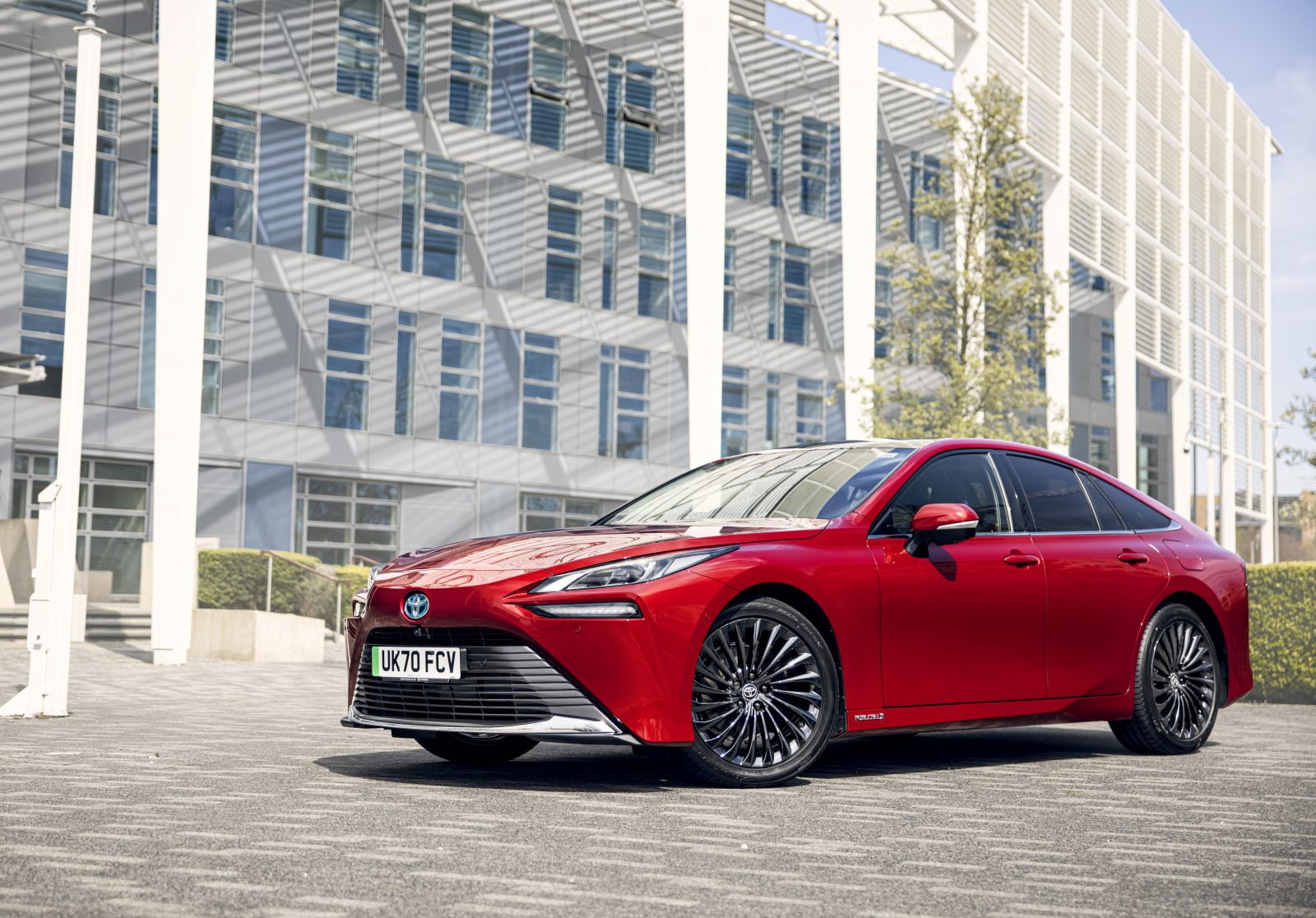 The second-generation Toyota Mirai is a car that takes the concept of fuel cell electric vehicles (FCEV) to the next level. The new Mirai offers contemporary styling, intelligent packaging, aerodynamic efficiency and mobility that produces no emissions other than pure water.

The development team focused on increasing the model’s appeal beyond simply that of being environmentally friendly, making it a car that people are attracted to because of its design and driving characteristics as well as its eco-performance. Its proportions are therefore low and wide and appear dynamically planted, while the cabin offers a warm, encapsulating environment that features soft-touch materials and ambient lighting.

The appearance of the first-generation Toyota Mirai was primarily dictated by its eco-car status. However, for the second-generation model the concept was developed under the theme of ‘Silent Dynamism’ and given three objectives: 1) To capitalise on its new rear-wheel drive platform; 2) Create a wider stance with a low centre of gravity; and 3) Shape an attractive, cohesive body with reduced emphasis on character lines.

The new Mirai uses visual cues to emphasise its well-planted stance. Elements that attract the eye, such as the bright moulding along the bottom edge of the trapezoidal grille, are purposely low-set, while the integrated boot spoiler is carefully positioned to define the rear end and avoid the appearance of a high waist. The headlights – the largest ever fitted to a Toyota car – curve into the sides to emphasise the car’s width and initiate a swage that creates a subtly rising beltline.

By using a combination of natural and man-made materials and textures, the design team has ensured that the advanced nature of Mirai has not made it cold or clinical to the senses. Instead, the interior environment actively expresses the car’s relaxing yet more fun-to-drive character.

While the driver’s seat is designed to give the sense of being enveloped, the rest of the cabin has an open feel. Yet there is design continuity through both sides as the clean and uncluttered instrument panel extends the width of the car. Control switches are uniform in size and shape and grouped according to their function. Similarly, the central, 12.3-inch high-definition multimedia screen can be configured to display concurrent information on either side, and uses familiar smartphone-style touch controls.

The fact that the new Mirai is constructed on Toyota’s GA-L rear-wheel drive modular platform – itself engineered to accommodate a hydrogen fuel cell from the start – has provided a higher degree of body rigidity and a lower centre of gravity, which contributes to greater agility and more nimble, rewarding handling. The chassis is also supported by new multi-link suspension and thicker anti-roll bars for improved stability, control and ride comfort.

This new architecture has allowed the powertrain to be optimally located for 50:50 weight distribution. The fuel cell stack and power converter have now been consolidated into one unit and reduced in size so that it can be positioned at the front (equivalent to the engine bay), while the high-voltage battery is installed above the rear axle.

The three hydrogen tanks are now arranged in a ‘T’ configuration. The longest runs longitudinally along the centre of the car and the two smaller tanks are set transversely beneath the rear seats and luggage compartment. Together they hold 5.6kg of hydrogen, which is 30% more than before.

The fuel cell stack still uses a solid polymer but has reduced its cell count from 370 to 330, which in combination with many other innovations and improvements has contributed to an overall 42% weight reduction yet a 12% increase in power. Similarly, the lithium-ion battery is now smaller in size and more energy-dense. Its 84 cells are rated at 310.8 volts and have a four amp capacity.

The fuel cell stack and battery work in harmony to deliver the precise level of acceleration commanded by the driver’s use of the throttle. Instant torque and maximum acceleration is available from standstill and there has been a significant improvement in mid-range urge, providing excellent response and stress-free driving on fast-flowing roads. Despite offering more power, fuel economy is actually improved, with the Mirai now offering around 400 miles between refuelling stops.

Advanced safety of the new Mirai

The new Mirai is equipped as standard with the latest generation Toyota Safety Sense. This provides a series of active safety and driver assistance systems designed to help prevent a number of common accident risks and provide superior protection to driver and passengers, should an impact happen.

Its incredibly strong body is designed to protect vehicle occupants, the fuel cell stack and hydrogen tanks in the event of an impact. To address features specific to an FCEV, aluminium members are integrated into the fuel cell stack structure, with energy-absorbing elements to mitigate the effects of a front-end impact.

All three hydrogen tanks are double-lined with resin and located outside the cabin space, so that in the unlikely event of any gas escaping it will disperse into the atmosphere. Nevertheless, sensors throughout the car will immediately detect any leaks and illuminate a warning in the driver’s instrument display.

New Mirai: cleaning the air as you drive

Toyota has incorporated an innovative new catalyst-type filter within the fuel cell air intake. Using an electrical charge across the filter element, it actively cleans the air as you drive by sucking up microscopic pollutants such as sulphur dioxide and nitrous oxides before neutralising them as the air they are suspended in passes through the fuel cell system. Pure water is the only by-product.