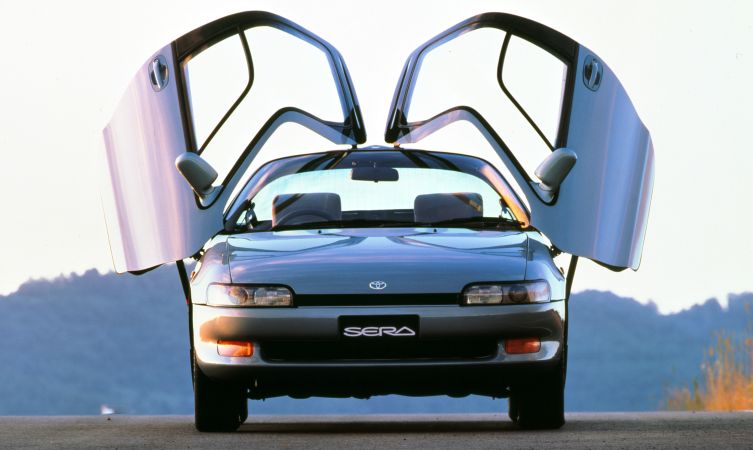 Developed at the height of the Japanese automotive industry’s economic boom, the Toyota Sera was an innovative, supermini-size coupe built for the home market between 1990 and 1995. With its glassy canopy and dramatic gull-wing doors the Sera looked incredibly futuristic when compared to its contemporaries; the reason for which can be traced back to the Toyota AXV-II concept car.

The AXV-II (above) was one of eleven special display vehicles Toyota prepared for the 1987 Tokyo Motor Show. Although it was advertised as an experiment designed to anticipate automobiles and technologies of the next decade, the AXV-II was actually close to being production ready. Enough, in fact, for Toyota to invite selected members of the Japanese motoring press to test drive the concept in advance of the show.

After a few design tweaks, the AXV-II went into production a little over two years later, with the first examples reaching customers in March 1990. The futuristic nature of the new Toyota was reflected in its name, Sera, which is the future tense of the French word etre (to be). According to the official press release of 8 March 1990, the name was chosen “to signify a dream-like car that takes us into the future.”

The new Toyota Sera (known internally by its EXY10 chassis code) shared many mechanical components with the closely related Starlet model. But it was differentiated by a wealth of standout features, the headline element of which was, of course, those unusual doors.

This was the first time that such a gull-wing design had ever been seen on a mass-produced Japanese car, and it apparently inspired Gordon Murray’s development of the McLaren F1 supercar. Each door was hinged in two locations – above the windscreen and at the base of the A-pillar – and that dihedral geometry allowed it to fully open in a more confined space than a traditional side hinge arrangement. Dual, asymmetric gas struts were installed in the doors to maintain consistent operating effort regardless of outside temperature changes.

Even when both doors were closed, the Sera’s wrap-around, all-glass cabin gave occupants the feeling of space, as if they were observing the world through a spherical bubble. However, the resulting solar load meant that air conditioning and power windows were included as standard equipment.

In a similar way, the sought-after Super Live Sound System option surrounded occupants in one of the most radical audio systems Toyota has ever engineered. This factory-fit system consisted of an array of ten speakers, including an acoustic resonance woofer in the boot and a newly developed, three-mode digital signal processor. It was also possible to rotate the rear deck speakers to bounce sound waves off the glass and create an alternate audio image.

The Sera was powered by the largest displacement engine from Toyota’s efficient four-cylinder E-series range. Known as the 5E-FHE, this newly developed, second-generation unit offered 1,496cc and a twin cam, 16-valve layout with high compression pistons and a relatively lofty 7,900rpm redline. Its sophisticated tuning and management allowed the 5E-FHE to balance strong levels of torque at low to medium engine speeds, with the enthusiasm of a sporty twin cam engine at higher revs.

These qualities were complimented by a newly designed suspension system and a wide wheel track (equal on both sides) that delivered the responses, stability and comfort that drivers might have expected from a coupe model. From the factory, all Sera models were equipped with high-performance tyres with asymmetrical and unidirectional tread patterns. Power steering was fitted as standard, although a four-wheel anti-lock brake system was optional.

Almost one year after the start of production, the Sera received the prestigious 1991 Torino-Piemonte Car Design Award for production cars, widely regarded as the top award in auto design. The Sera received high marks from all eleven jurors and was particularly praised for its balance of high-tech style and practicality that made the vehicle such a sales hit among first-time buyers.

Just under 16,000 Toyota Sera models were made from the start of production in February 1990, and all were destined for the Japanese domestic market. Three quarters of the cars were made and sold in the first phase of production, while the two subsequent phases only tweaked minor elements to keep the Sera looking fresh. However, by the start of phase two, the Japanese economy was already in steep decline, and phase three arrived after the bubble had burst. As a result, it was felt that the optimism and decadence wrapped up in the futuristic Toyota Sera had run its course, and production concluded in December 1995.

Since then, the Sera has become a firm favourite with importers – initially within right-hand drive markets such as the UK, but more recently in North American countries, where vehicles become straightforward to import and register after they reach 15-25 years old. The oldest examples of the Sera are now 30 years old and are being discovered, appreciated and restored by a new generation of Toyota enthusiasts.